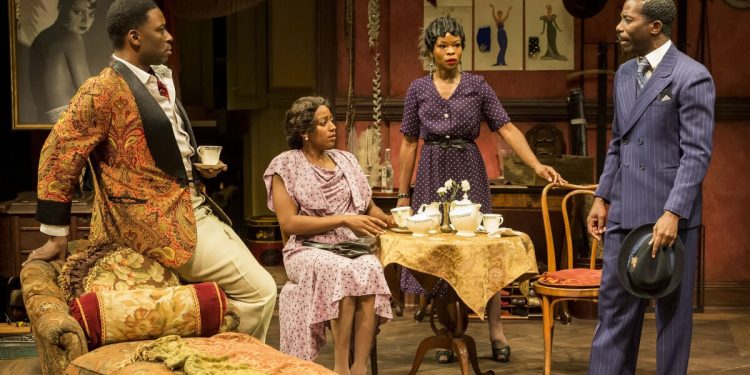 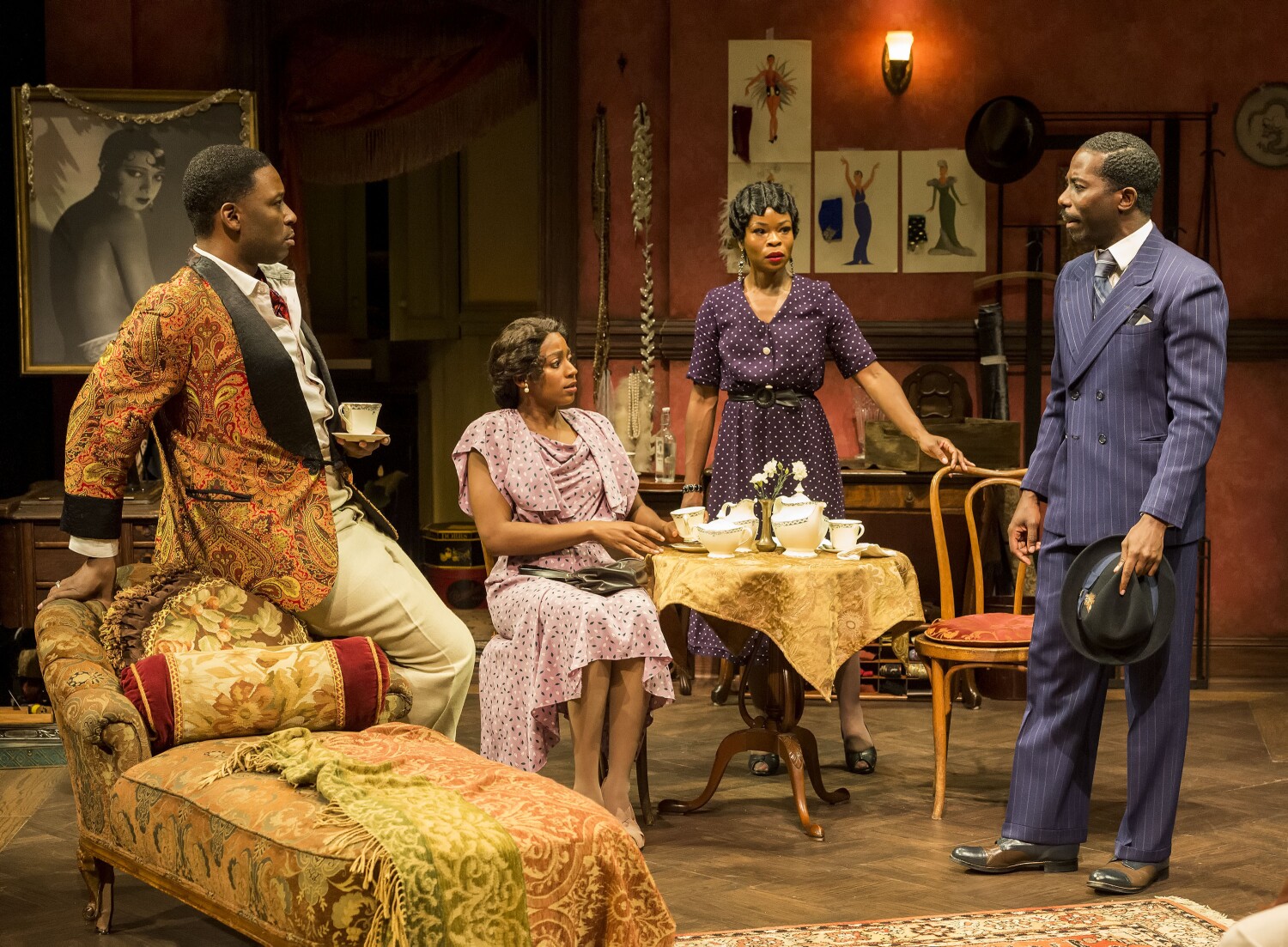 The plays of Pearl Cleage have left an impression of unfinished business. Conventional in form yet daring in political content, concerned with gender as much as they are with race, these works don’t fit neatly into preexisting schemes.

Black theater companies and regional theaters of integrity have made space for Cleage, who is also an established novelist, poet, essayist and political speech writer. But her dramas have often been consigned to that limbo of the American theater between the mainstream and the avant-garde.

Earlier this season, South Coast Repertory produced Cleage’s “What I Learned in Paris,” a plot-heavy comedy inspired by the author’s work on the 1973 campaign that led to Maynard Jackson becoming the first Black mayor of Atlanta. On Wednesday, Cleage’s “Blues for an Alabama Sky” opened at the Mark Taper Forum under the assured direction of Phylicia Rashad.

Were someone in Southern California to revive Cleage’s “Flyin’ West” in the next couple of months we could call this a local retrospective. As it is, a clearer picture has emerged of the particular gifts and limitations of a dramatist who has bravely followed her own path.

“Alabama Sky” has been making the regional-theater rounds since it was produced by Atlanta’s Alliance Theatre Company under the direction of Kenny Leon in 1995. But it took 25 years for the play to finally have its New York premiere (at off-Broadway’s Keen Company in February 2020) — a lag that says more about New York’s fixation on theatrical trends than it does about Cleage’s standing as a Black playwright.

Los Angeles has lavished far more attention on “Alabama Sky,” which had its premiere here at the Los Angeles Theatre Center in a 1998 production starring Loretta Devine. A deluxe 2011 revival at Pasadena Playhouse (directed by Sheldon Epps and starring Robin Givens) treated the play as a contemporary classic.

Epps’ production featured sets by John Iacovelli, who has once again been enlisted to bring the play’s 1930 Harlem milieu to life. His gorgeously moody scenic design for the Taper production consists primarily of two neighboring apartments reflecting the dreams and daily realities of their independent-minded occupants.

Ever in view is a poetic sketch of Harlem rooftops, which looms above the action as an image of communal aspiration. The Harlem Renaissance is underway, and though the Great Depression has crashed the party, the creative spirit is not easily quelled.

Angel (Nija Okoro), a nightclub singer, is down on her luck. Shortly after being dumped by her gangster boyfriend, who wields a lot of power at the clubs, she throws a fit onstage and is fired from her job. Guy (Greg Alverez Reid), a gay costume designer who wants nothing more than to move to Paris and design clothes for chanteuse Josephine Baker, has brought Angel back to his place to sober up and recover her dignity.

Delia (Kim Steele), a prim social worker who lives across the hall, is part of this makeshift family of friends. Her ambition is to set up Harlem’s first birth control clinic with Sam (Joe Holt), a local doctor who has devoted himself to the community. Exhausted from his work, he’s held onto his bachelorhood with a tight grip, but his heart has begun to stir for Delia.

An Alabama stranger named Leland (Dennis Pearson) insinuates himself into this tight-knit group. A young widower looking to restart his life, he has his eye on Angel, whose name doesn’t quite fit her jagged character. But can his conservative, homophobic ways be reconciled with the loose morals and progressive values of this Harlem age?

Cleage sets up the world of the play with a novelist’s expansiveness. There’s no rush to establish a central conflict. Character drawing and historical notation matter more to her than storytelling momentum. There are references throughout to Langston Hughes, the Rev. Adam Clayton Powell Jr. and, of course, Josephine Baker, whose portrait has pride of place in Guy’s apartment.

Angel, Guy, Delia and Sam could hardly be more different, but what unites them is a commitment to personal freedom. For Angel, that means figuring out how to survive as a woman who doesn’t want to lead a menial, humdrum life. For Guy, it’s about being out and proud as a creatively flourishing homosexual. For Delia, it signifies reproductive choice for her struggling neighbors. And for Sam, it’s a matter of extending compassionate dignity to those who have been routinely denied it.

The wheels of the plot move slowly, too slowly perhaps for contemporary taste. In an interview with Alexis Greene for the book “Women Who Write Plays: Interviews With American Dramatists,” Cleage was clear-eyed about her dramatic style: “I like Ibsen. I love Lorraine Hansberry. I like old-fashioned, well-made plays, where there’s a lot of talk. … I tend to have an old-fashioned structure.”

“Alabama Sky” moves with the languor of a Tennessee Williams drama. The pace can feel sluggish at points but the relationships of the characters sustain our interest even when their individual storylines seem stalled or muddled. Fate, ultimately, is of less emotional consequence than friendship.

Cleage’s dilatory method, unfortunately, nudges her to find melodramatic solutions to the stasis. A gun makes an appearance; audiences know it will have to be fired. The ending, as a result, doesn’t feel fully earned. But everything that has come before it lingers hauntingly, like a vintage photo of figures who walk straight into our imaginations.

But what distinguishes Rashad’s work is her refusal to define any of the characters as heroes or villains. The actors are playing complicated human beings, and she wants us to dwell among them before daring to judge their behavior.

Okoro’s Angel is morally worn out. Her throaty voice suggests hard living. The words she speaks are too often swallowed in careless diction, but when she erupts with the line “I’m tired of Negro dreams. All they ever do is break your heart,” every syllable is profoundly understood.

Reid’s Guy, aflame with courageous strength, nobly steers clear of stereotype. Steele‘s Delia and Holt’s Sam made me ardently wish that the selfless would at long last be granted a happy ending. Pearson’s Leland is too human to be dismissed as a hateful monster.

“Blues for an Alabama Sky” may not be a drama of the first rank. But this appealing Taper revival reveals why it has staying power.

‘Blues for an Alabama Sky’

Running time: 2 hours with one intermission

COVID protocol: Proof of full vaccination is required. Masks are required at all times. (Check website for changes.)