Rhali Dobson: The career behind a one-in-a-million story – FTBL | The home of football in Australia – The Women’s Game 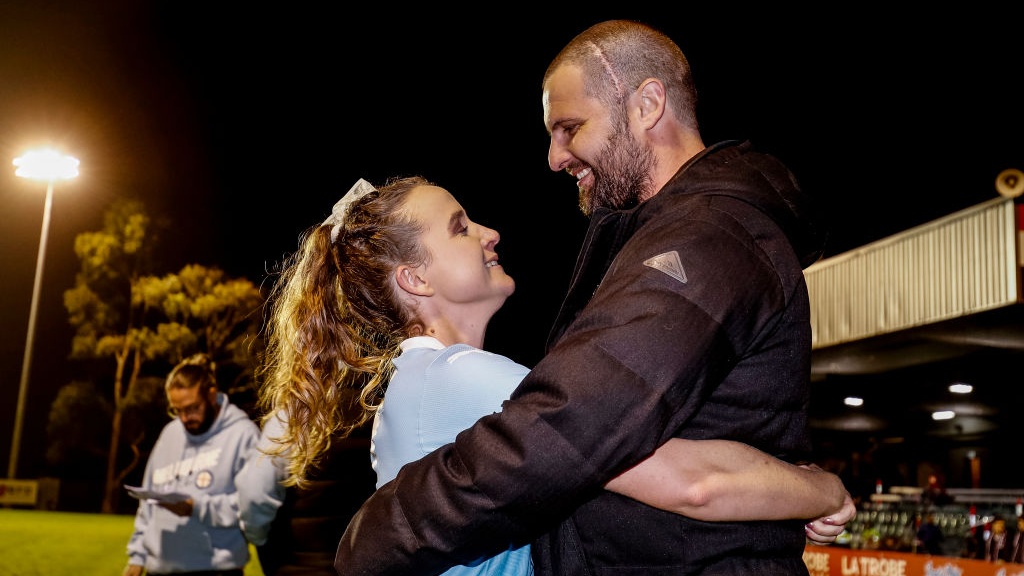 There are very few W-League players who have played since its 2008 inception. 29 year old Rhali Dobson was one of them.

At the time of her retirement in March she had played 109 W-League matches in her eleven seasons and won two W-League Championships and a Premiership.

The road to this success was not an easy one though.  It was built by persistence, perseverance, hard work and love, both on and off the field. This road was not travelled alone.  Dobson made it alongside her husband-to-be Matt Stonham.

A prolific young player, Dobson was first recruited to play for the Newcastle Jets aged 16 for the inaugural W-League season. While the dream of playing professional football was something that was not possible until that year, it also did not pay the bills once she started.

Her first full time season as a W-League player saw her make $200 for six months work, with training sessions 4-5 times a week. Dobson began studying occupational therapy and working part-time as a bartender and a referee to pay the bills.

It was during one of her games as a referee that she met Matt Stonham and the initial meeting was not a fortuitous one. Unhappy with one of Dobson’s calls, Stonham made his feelings known.

In return, Dobson stated to ABC News she remembers thinking he was “an absolute moron”. It was not until Stonham saw Dobson play for the Newcastle Jets that the relationship changed.

Stonham was blown away by her tenacious style of play and sheer determination. The common link of love of football changed their relationship from one of animosity to an amiable and ultimately an amorous one, ultimately becoming girlfriend and boyfriend.

The struggles of dating a busy professional athlete did not deter Stonham, who desired as much as his girlfriend to see her succeed in the sport she loved. His emotional support was present through the ups and downs of soccer.

This included when Dobson was called up to the Matildas and received her first cap in 2014, and was subsequently dropped from the squad.

That support though went both ways.

When Stonham collapsed during a soccer match in 2017, Dobson refused to accept two doctors’ diagnosis of concussion.

Convinced it couldn’t be so, due to the lack of head contact, she did not let up until her boyfriend was sent to the MRI. It was there that the discovery was made that the seemingly healthy young man, a few days from his 30th birthday, had a grade two tumour.

Stonham was operated on several weeks later and then started six months of chemotherapy. It was during this time that Dobson received a call that she was being dropped from the Newcastle Jets.

She resigned herself that the professional footballing part of her life was over and it was her time hang up her boots.

However, several months later she got an unexpected call that changed it all. Melbourne City Football Club wanted her.

While Dobson was overwhelmed with joy, she was also weary about leaving Stonham. He indicated to her that she had to go and prove those who doubted her wrong.

Once in Melbourne, Dobson dedicated herself to her football training.  She became an integral part of the City squad that went on to with two championships and one premiership during her four years with the squad.

Her time with Melbourne City continued this past year.  However, in January Dobson received news bad news.  Stonham’s cancer had returned.  Not only would he need radiation treatment and another surgery, but 11 months of chemotherapy.

Dobson decided immediately that this would be her last season. After the conclusion of the 2020-21 W-League season she would retire from professional football and dedicate her time to supporting the man who had always been there for her.  During her last few months in Melbourne she proposed marriage to Stonham twice over voice calls, receiving laughs from his part on both occasions.

A 2-1 win over the Perth Glory with a goal in her last club game seemed like the perfect ending. A joyous way to conclude a distinguished career. However, Stonham had prepared a surprise to give Dobson one more thing to celebrate.  After the conclusion of the match he dropped to one knee and proposed.

Dobson is now back at home in Maitland, New South Wales, located 40 minutes from Newcastle. She has since become the first woman to feature in the men’s FFA Cup, when she played for the Bolwarra Bushrangers earlier this month.

Dobson and Stonham plan to marry later this year. They are the subject of Australian Story tonight at 8pm on ABC.