There will be no orderly transition of power, and no ceremonial handing over of the baton. Richmond remains the competition’s best team and has a genuine chance of winning a third consecutive premiership — its fourth in five years.

The Tigers went from the hunted to the hunters on Friday night against a Bulldogs side that was undefeated through the opening six rounds and playing some of the most convincing football of any team. The Western Bulldogs were on the verge of putting a big dent in Richmond’s flag defence, but one moment before half-time opened the door — and the Tigers ran right through it to show their classic style still works, writes Andrew McGarry.

The pressure was immense as Damien Hardwick’s side played with a renewed hunger and desperation.

Shai Bolton finished fourth in the club’s best and fairest last year and his standing in the game only continues to rise.

Tom Lynch returned to form with 12 marks and three goals, and Toby Nankervis, like his sizeable frame, was massive.

Yes, there was a narrow loss to Port Adelaide and a poor showing against Melbourne on Anzac Day eve, but the Tigers have shown they’re consistently at their best at the back end of the season.

Friday night was a reminder, even without key personnel, of just how good they can be.

Melbourne may not have built the bank of trust Richmond’s proven record has earned, but a seven-win start to the season has rightly put a sparkle in the eyes of many a Demons supporter.

Those I spoke to preseason were sceptical, but there’s now a growing sense of optimism. Few are willing to openly speak of breaking a premiership drought that dates back to 1964, but I’m certain the idea’s been privately entertained.

The Dees were initially a little subdued against a determined North Melbourne yesterday and the early loss of Adam Tomlinson to a serious knee injury was emotionally confronting. But Melbourne stood up in a match its former fragile self might have dropped.

Bayley Fritsch kicked a career-high six goals and excitement machine Kysaiah Pickett — three goals — again had you captivated. Steven May, Ed Langdon and Christian Salem were critical, with prime movers Clayton Oliver and Christian Petracca a little down, while Jack Viney was a late withdrawal and will miss a few weeks with a toe injury.

There were signs late last year that the Demons were building, but few would have predicted the magnitude of their rise.

Keep the lid on, Dees fans, but maybe clear out your September diaries.

Nathan Murphy’s superb back-with-the-flight mark in defence for Collingwood on Saturday should be the only bit of footage used in the Magpies’ review this week.

Murphy’s courage and unflinching commitment was in stark contrast to much of what was served up by his teammates on an indefensible afternoon for Nathan Buckley’s side.

Buckley has now declared he wants to continue as coach when his contract expires at the end of the season, but if club officials continue to perpetuate the myth the club can still play finals, he’s a dead man walking.

Collingwood’s hierarchy needs to acknowledge where it sits. A Dom Sheed kick away from the premiership in 2018, the Magpies have been in gradual decline ever since, and in 2021 have fallen off the cliff.

Buckley should not be judged against unrealistic targets but against his success in bringing through the emerging youth on his list as the season rolls on.

Magpies’ head of football, Graeme Wright, gave Buckley cause for optimism on The Lead on ABC Grandstand on Saturday. 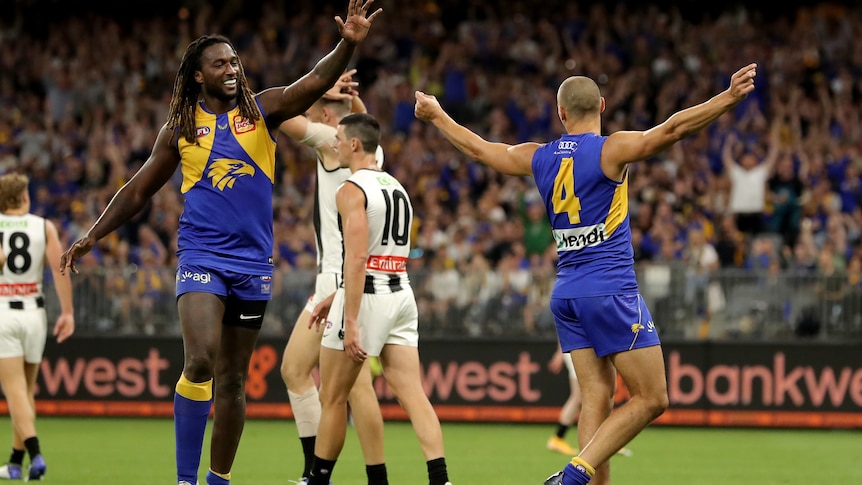 The best interviews, conversations and coverage from ABC Grandstand across the country. A sports lover’s dream.

“I’ve been a fan as well from the outside and also too from the inside, so I think it all tracks in the right direction.

“But we were all clear, let’s make a decision when we’ve got two-thirds of the year under our belt.”

Collingwood is determined to ignore the external noise, which will reach deafening proportions if the Magpies fall to the bottom-placed Kangaroos this weekend.

Karma comes for the Cats

It’s fair to say if you were a golf professional, you wouldn’t want an AFL umpire for a caddy.

But the 15-metre kick is the most poorly adjudicated rule in the game, with marks routinely paid when the ball travelled no further than a 20-foot putt.

The usually generous assessment of distance made Saturday night’s howler at the SCG all the more conspicuous.

In this instance, the umpires badly underestimated the length of Brad Close’s kick across the goal mouth in the dying moments of the clash with Sydney.

The AFL on Sunday confirmed Jeremy Cameron should have been paid a mark in the right forward pocket, giving him the chance to be a hero in just his second game for the Cats. Cameron still needed to bend the ball through from a tight angle but, as a left-footer, there was every chance.

Seconds later, the Cats should also have been awarded a holding-the-ball free kick directly in front when James Rowbottom leapt on the ball, was tackled by Joel Selwood and made no effort to dispose of it. It was blatant.

Few will sympathise with Geelong given there was a sense of irony in the finish at the SCG. In round two, the Cats’ own good fortune saw them hang on against Brisbane with the help of an umpiring blunder.

So, I guess Geelong is even par with one that was lucky to drop and another that looked in but lipped out.

Q1 2021: A Historic Quarter of Growth for Keller Williams

The Secret To Add Value To Learning Outcomes

Native Spring Ephemerals for the Midwest