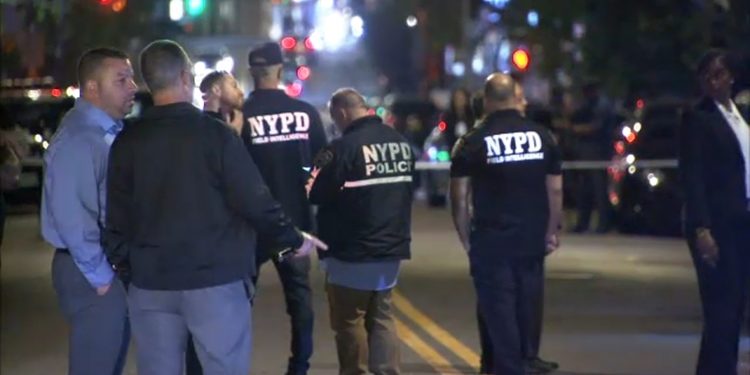 0
SHARES
4
VIEWS
Share on FacebookShare on Twitter
WEST BRIGHTON, Staten Island (WABC) — An on-duty EMT was shot in his shoulder while treating an allegedly drunk and disorderly patient on Staten Island.

First responders picked up the apparently intoxicated patient outside of the Funky Monkey Bar in the West Brighton neighborhood of Staten Island just before 8:00 p.m.
Wednesday after reports of a disorderly person at the bar.

Police say the 37-year-old suspect, identified as Thomas McCauley, was outside of the bar when the EMTs arrived and walked himself into the back of the ambulance. They say he was answering questions on the way to Richmond University Medical Center.

As an EMT was administering aid on-board the ambulance, the patient is accused of suddenly firing a handgun, striking the 25-year-old paramedic in the shoulder.

When the driver of the ambulance pulled over, they say McCauley fled out the back door.

He was quickly apprehended by a retired NYPD detective and off-duty Department of Sanitation lieutenant.

The EMT was transported by his partner to Richmond University Medical Center and is being treated in the trauma unit in stable condition. He is expected to make a full recovery.

A 38-caliber revolver held together by black electrical tape was recovered at the scene.

McCauley has been detained and charges are pending against him. Officials say he had been the subject of a previous call to police about an emotionally disturbed person.

ALSO READ | Homemade baby formula could be dangerous: What parents can do amid shortage