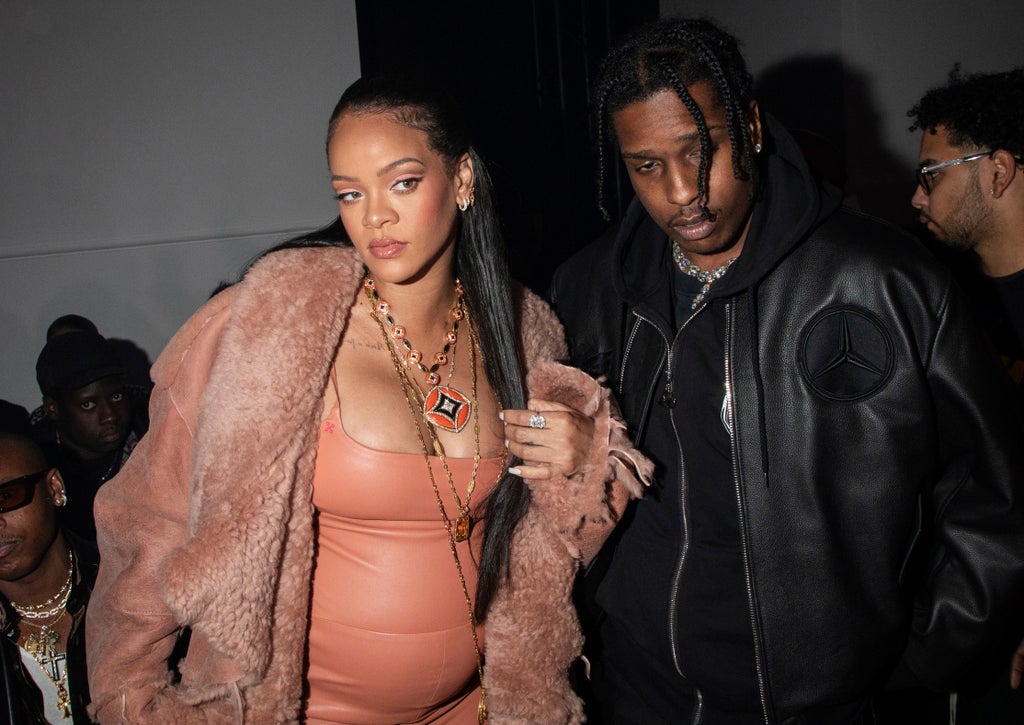 Rihanna and A$AP Rocky are trending on social media as fans try to work out if rumours around the couple’s relationship status are true.

It comes after fashion influencer and writer Louis Pisano tweeted that Rihanna and A$AP have “split” and alleged that the latter was “caught cheating”.

The Barbadian singer is currently expecting her first child with the rapper and is in her third trimester.

Pisano alleged: “Rihanna broke up with [A$AP] after she caught him cheating with shoe designer Amina Muaddi.

“Amina was responsible for designing Fenty’s footwear offering and Rihanna is often seen in custom shoes from her own label,” he added.

The unverified claims have sparked huge reactions from fans of the Fenty Beauty mogul, with many of them reluctant to believe it until official confirmation from either party.

One person said: “Me finding out Rihanna and A$AP have broken up but I have yet to see an actually valid source to confirm.”

Another wrote: “I do not believe A$AP Rocky cheated on Rihanna. I refuse to believe he’s that dumb.”

However, several people pointed out that Muaddi posted photographs of Rihanna wearing her designs just hours ago on her Instagram account.

On Thursday evening, the designer posted a shot of the Umbrella singer wearing the Ursina pumps in red and white snakeskin.

Muaddin had also posted a photograph of Rihanna on 4 April, of the pop star wearing her thigh-high black boots.

Many people lamented that if the rumour was true, it would mean there is “no hope” for them.

“Rihanna got cheated on?!?! Yeah there’s no hope I’ll find a good man,” one person tweeted.

A second person added: “Rihanna getting cheated on while pregnant just made all women lose hope towards finding a loyal man.”

Rapper Drake has also been trending on Twitter, after hundreds of people posted memes joking about him running to Rihanna’s side to comfort her.

The pair were linked romantically for several months in 2009, but never made their relationship official. They have collaborated on several hugely popular songs, including What’s My Name?, Take Careand Work.

At the 2016 MTV Video Music Awards, Drake said he had “been in love” with Rihanna since he was 22, adding: “She’s one of my best friends in the world. She’s a living, breathing legend in our industry.”

Earlier this week, Rihanna appeared on the cover of US Vogue and opened up about her relationship with A$AP in an interview with the fashion magazine.

She said: “I just feel like I can do any part of life by his side.

“People don’t get out of the friend zone very easily with me. I certainly took a while to get over how much I know him and how much he knows me, because we also know how much trouble we can land each other in.”

The Independent has contacted representatives for Rihanna, A$AP and Muaddi for comment.

Biden ups Ukraine aid as war enters new phase. Will it be enough?