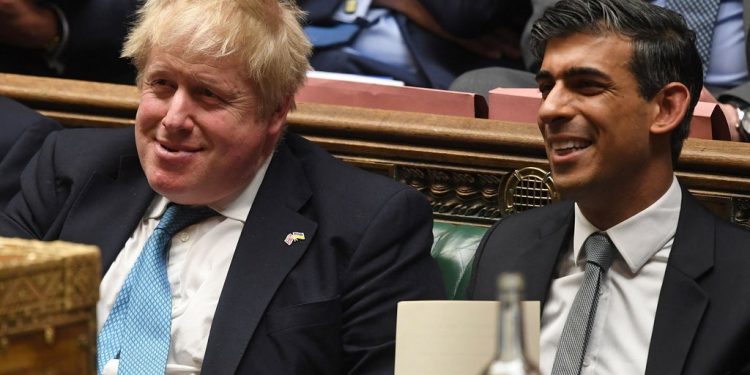 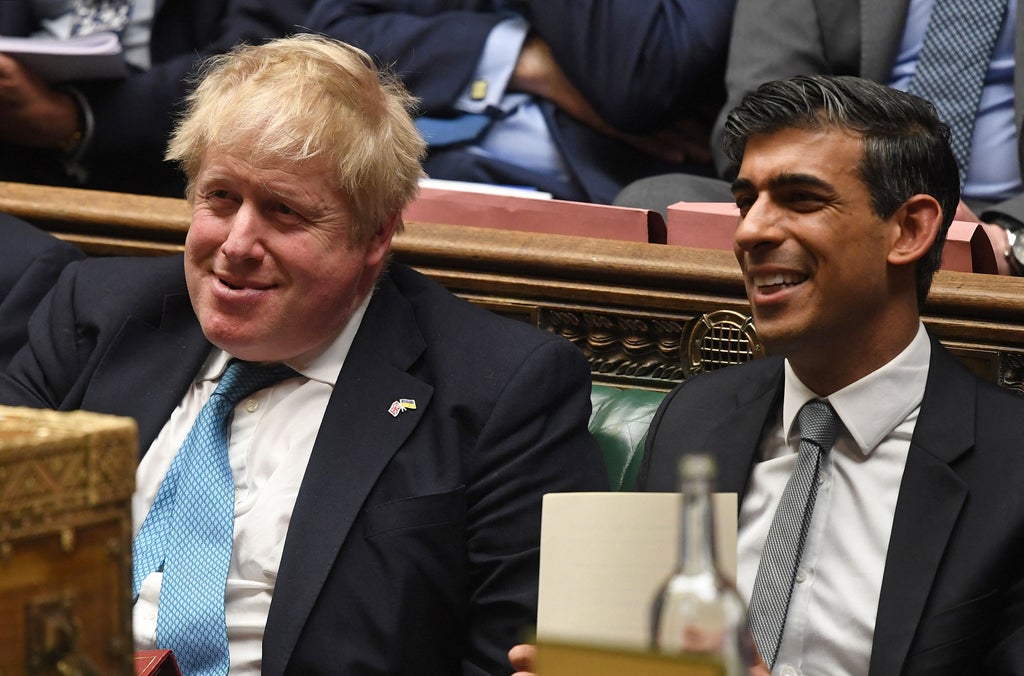 Rishi Sunak is a ‘remarkable force for good’ in British politics, says minister

Rishi Sunak has written to prime minister Boris Johnson seeking an investigation into his finances just days after The Independent revealed that his millionaire wife Akshata Murty saved on taxes due to her “non-dom” status.

The embattled multimillionaire chancellor has asked that his declarations are submitted to Lord Christopher Geidt, the Independent Adviser on Ministers’ Interests, following mounting pressure over his tax affairs.

Labour’s deputy leader Angela Rayner claims Rishi Sunak has made a “catalogue of potential breaches of the Ministerial Code”.

Meanwhile the shadow justice secretary said there was a “whole list of areas where the chancellor appears to have failed to declare things he should have declared.”

In a statement posted on Twitter, Mr Sunak said: “I have always followed the rules and I hope such a review will provide further clarity.”

Rishi Sunak has been ‘very candid’ about his financial affairs, insists Eustice

Embattled Rishi Sunak has “paid all of his taxes” and been very candid about his financial arrangements, a Cabinet colleague insisted after the Chancellor requested an investigation into his own actions.

Mr Sunak referred himself to Boris Johnson’s independent adviser on ministerial interests as he sought to fend off questions over his family’s finances.

In a letter to the prime minister, Mr Sunak asked that Lord Geidt should review all his declarations of interest since he became a minister in 2018 to ensure they had been properly stated.

Environment Secretary George Eustice has defended the embattled multimillionaire chancellor Rishi Sunak, saying: “I don’t think it’s right that we should have a rule that says you’re too wealthy to be able to do a role.”

He told BBC Radio 4’s Today programme: “It’s usually the case that if you’re taking a decision that’s got a direct impact on your own family members or even sometimes on your own constituency, there’s a convention that a different minister would take that individual decision.

“But it doesn’t stop you from taking more general policy decisions in the round, so it’s a complex area, but it’s something obviously the Cabinet Office will now look at, but Rishi Sunak’s been very clear that he’s declared everything that needed to be declared at the right time.”

Asked if Mr Sunak was “too rich” to be chancellor or potential party leader, Mr Eustice said: “I don’t think it’s right that we should have a rule that says you’re too wealthy to be able to do a role – what matters is the knowledge, the technical expertise that you have.”

He added: “You can’t walk a mile in everyone’s shoes, all of us have different perspectives, different experiences in life and for any MP, let alone minister, the single most important thing is an ability to empathise (with) people who might have had experiences and challenges in their life, that you’ve personally not experienced.”

‘I’m not the accountant for cabinet colleagues’: Eustice dodges question on non-dom status of ministers

Environment secretary George Eustice said he was not “the accountant for cabinet colleagues” as he asked if fellow ministers had ever held non-dom status.

Multimillionaire chancellor Rishi Sunak has faced days of scrutiny following The Independent’s revelation that his wife Akshata Murty – whose father is one of India’s richest men – has been claiming non-domicile status.

Senior Tory minister: ‘I don’t know anybody who may or may not have had non-dom status’ in cabinet

Environment secretary George Eustice says he does not anticipate other cabinet colleagues coming forward about their tax status.

“I’m not the accountant for my ministerial colleagues in cabinet,” he told Sky News. “I don’t know anybody who may or may not have had non-dom status.”

“I can tell you that I never have and would never seek to have one.”

He added: “I judge ministerial colleagues based on their performance in the role and I think Rishi Sunak has performed very well as Chancellor of the Exchequer (during) some extraordinarily difficult times, and he himself has now referred himself to Lord Geidt, the prime minister’s adviser on ministerial (standards) to look at these matters and I’m really not going to get drawn in to commenting any further than I have on his wife’s tax affairs.”

Senior Tory minister: Rishi Sunak ‘declared everything that should have been declared’

The chancellor has been “very candid about his own arrangements at every stage,” environment secretary George Eustice says.

Asked about Rishi Sunak referring himself to Boris Johnson’s independent adviser on ministerial interests, Mr Eustice told Sky News: “Rishi Sunak and his wife have spoken for themselves on this. I’m not his accountant, I’m not responsible obviously for his tax affairs or those indeed of his wife.

“She gave a statement over the weekend, she’s now made clear that although she hasn’t done anything wrong, she’s a citizen of India and grew up and was born in India, has some income from that, nevertheless she’s changing her tax arrangements so that she would pay the tax on that income here in the UK.

“Rishi himself, there’s been some speculation around that, he’s written to the prime minister and asked the adviser on ministerial (standards) to look at this case. He’s very clear that he’s declared everything that should have been declared at the right time and there is a process here that you have as a minister.

“You declare all your interests to the permanent secretary in your department, and the Cabinet Office then decide which bits should be made public, which bits they should be aware of, there’s a duty of candour in both directions and Rishi’s very clear that he’s been very candid about his own arrangements at every stage.”

Asked if he thinks Rishi Sunak has possibly broken the ministerial code, Steve Reed told BBC Radio 4’s Today programme: “Absolutely. But it’s not an isolated incident, there are other failures here as well.”

The shadow justice secretary added: “He also failed to declare his wife’s £690-million share-hold in Infosys, an IT company based in India, which has had, according to what we’ve been able to find out, 15 different one-to-one meetings with senior ministers, including the prime minister, and has been awarded multimillion-pound government contracts.

“Now, if the chancellor’s household is benefiting from contracts of that kind that should have been something that he declared in the register of interest, but he didn’t.

“There’s a whole list of areas where the chancellor appears to have failed to declare things he should have declared.”

Shadow justice secretary Steve Reed says a letter from Labour deputy leader Angela Rayner to the prime minister detailing a list of concerns seems to have been the trigger for Chancellor Rishi Sunak referring himself to Boris Johnson’s independent adviser on ministerial interests.

Mr Reed told BBC Radio 4’s Today programme: “What really concerns me is that there is a growing sense of self-entitlement right across the top of Government now.

“We saw it in ‘partygate’ where the Government were breaking the laws that they expected everyone else to follow, ripping up the rules after Owen Patterson, and now with Rishi Sunak.

“Some of the concerns include the Chancellor’s failure to declare his wife’s non-dom status in his register of interests, and why that matters is because the Finance Act, this year just went through Parliament, includes changes that benefit wealthy non-doms.

“Now under the ministerial code, ministers should not be taking decisions, they should recuse themselves from decisions where they personally may be benefiting, and the Chancellor’s household income certainly benefited in this case.”

Labour’s deputy leader Angela Rayner claims Rishi Sunak has made a “catalogue of potential breaches of the Ministerial Code”.

In a letter addressed to the prime minister, she accused the chancellor of failing to be transparent about his finances.

Mr Sunak says he has “always followed the rules”.

You can read the full letter below.

“Rishi Sunak wants an enquiry into who leaked details of his wife’s tax status. I want an enquiry into why he has put up taxes 15 times for ordinary people while his family was allowed to get away with not paying taxes,” Labour MP Bill Esterson wrote on Twitter.

Truss takes over Sunak as top contender to replace PM

Liz Truss is emerging as a frontrunner within the Torries to replace prime minister Boris Johnson after Rishi Sunak was caught in a controversy over his wife’s tax affairs.

Sir Keir Starmer remains the favourite to become the next prime minister, with comparison site Oddschecker putting the Labour leader’s chances at 6/1.

Within the Conservative Party, the foreign secretary is now out in front of the chancellor, with odds of 9/1 for Ms Truss and 21/10 for Mr Sunak, reports Andy Gregory.

4 Things Landlords Are Not Allowed to Do