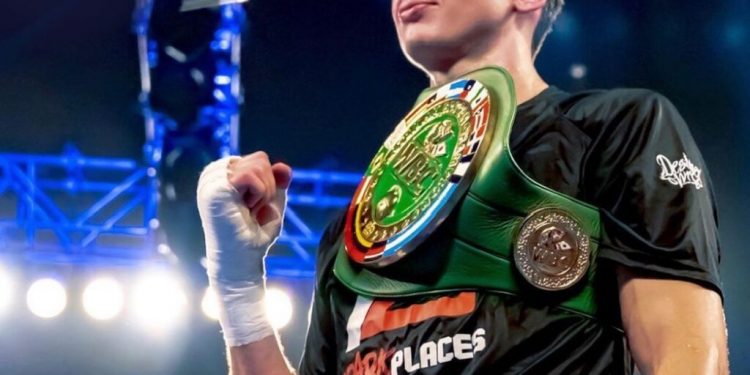 
What city hosted the famous fights between Tyson and Spinks, Forman and Holyfield, Duran and Barkley, and Roy Jones and Vinny Pazienza? If you quickly answered Las Vegas, well, you are wrong. These epic fights took place in Atlantic City, New Jersey. However, one can hardly blame you if you answered the question incorrectly. Today, most of boxing’s premier fights and world title matches mostly take place in Las Vegas. However, during the 1980s, this New Jersey coastal city rivaled “sin city” as boxing’s “mecca,” hosting upwards of one-hundred-fifty boxing events per year. And one of its most popular venues was Boardwalk Hall.

Constructed in 1929, Boardwalk Hall held its first boxing match in 1930 and has hosted over 250 fights. Joey Giardello and Dick Tiger fought for the WBA/WBC world title match in this historic building. It was a first for both Atlantic City and Boardwalk Hall. Since then, “The Hall” would be home to some of boxing’s most memorable matches, including the four I mentioned previously.

Long past its glory days, Boardwalk Hall doesn’t host many world-title matches. And it’s been three years since a world-title event has headlined there. However, that doesn’t mean great boxing doesn’t occur at this historic landmark. On March 26th, now known as the Jim Whelan Boardwalk Hall, Rising Star Promotions will showcase what promises to be an exciting night of boxing.

The event is promoted by Thomas “Cornflake” LaManna. You’re probably saying to yourself, wait a minute, LaManna? As in the professional boxer from Millville, New Jersey? Thomas LaManna is teaming up with Fight Night Live & Flo Sports for this boxing event live from Atlantic City.

Yes, that’s him, alright. The thirty-year-old New Jersey native is an accomplished boxer who has fought for the WBA World Middleweight title. But on Saturday night, Thomas LaManna will moonlight as a boxing promoter. A proud New Jerseyan, LaManna focuses on presenting cards highlighting up-and-coming local and regional fighters.

This boxing card is stacked with twelve bouts featuring twenty-four local, national, and international fighters. Fighters from the Philippines, Puerto Rico, Louisiana, Florida, and Maryland will descend upon Atlantic City to wage a pugilistic war against the east coast prospects.

The Main Event is headlined by Greg “Sharpshooter” Outlaw (9-1) from Bowie, MD going up against Johnathan “John Boy” Montrel (12-0) from New Orleans, LA. In what is set to be an exciting bout, Montrel looks to preserve his undefeated record against a defensively sound counterpunching southpaw in Outlaw.

Brooklyn’s Omar Salem (10-1) takes on Philadelphia native Christopher Booker (16-9) in the co-main event. Salem will attempt to add a second “W” in the win column after suffering a controversial loss in his comeback fight this past August at Myrtle Beach, South Carolina. While the card is stacked with talented fighters, there are two Brooklyn prospects boxing fans should look for on Saturday night.

Scheduled for the seventh bout of the night, Brooklyn’s Kurt Scoby (pronounced Scooby) is a talented boxer with a deep boxing pedigree. I knew I was interviewing a fighter cut from a different cloth when he asked me not to call him champ. “I tried to stay away from that because everyone is a champ nowadays. I rather just stay in the grind and keep working for mine,” said Scoby.

Hard work is all Scoby has ever known. Born and raised in Duarte, California, Kurt made his way to Brooklyn to pursue his dream of becoming a prizefighter. “Life” was his response when I asked him what turned him onto boxing. Constantly fighting in school, Kurt needed a way to channel that energy and do something positive. So, following the advice of family and friends, he stepped into the Duarte Boxing Gym, led by trainers Louie and Victor Valenzuela. There, Scoby would learn the sweet science and develop as an amateur. The California native described his childhood as “growing up in the trenches.” Scoby would live in sixteen different foster care homes for much of his adolescence. But, determined not to let that define his future, Scoby worked hard to change his life. Kurt was an all-star high school running back, a two-sport phenom, and was recruited to play Division One football by Fresno State University. All the while training as a boxer when he could. Football was his way out of his difficult life, but boxing fueled him. After garnering success on the college gridiron, Scoby was scouted by various NFL teams, including the Chargers, Steelers, Patriots, and Jaguars. However, his heart was tied to boxing, and he would not pursue a career in the NFL. “When you don’t love something, you can get hurt doing it,” said the young prospect on why he decided to no longer play football.

With that, Scoby set out to make his dream of becoming a prizefighter. The aspiring boxer bought a plane ticket for eleven dollars during the pandemic and boarded a plane heading for New York City to fight in an amateur boxing tournament. Ludacris, right? Not to Kurt, who believes the cheap plane ticket was “a sign” to pursue this venture.

Upon arriving in New York, he ran into trainers Don Saxby and Leon “Cat” Taylor at the famous Gleason’s Gym. These men helped refine the young fighter into a complete boxer from one that was used to fighting an aggressive “Mexican style.” After compiling an impressive 125-35 amateur record, Scoby turned pro and is undefeated in six outings.

Kurt Scoby is an “old soul” whose favorite boxer is Ezzard Charles, and his ring-walk song is “Candy” by Cameo. Interesting, given most fighters his age gravitates towards Floyd Mayweather Jr. or Canelo Álvarez.  Why Ezzard Charles? “That’s old school; that’s where everything originated from. Ezzard Charles was a dog, and there are many more from the black murderers’ row. Not many people know about them,” said Scoby to NYFights.

Scoby has assimilated to the New York way of life. And other than him saying he’s from California, I wouldn’t have known otherwise. “I fell in love with the hustle of New York. In L.A., you can get complacent with all the beaches and driving. I knew this was my place because of the hustle and how people moved. They say New Yorkers are hard-nosed. Nah, they are not hard-nosed; they just tell you the truth. And that’s not what people are used in L.A.,” said Scoby with a New York swag.

Motivated by his six-year-old daughter Leo Noelle, his goal is to become a world champion. However, when asked what he hopes to achieve in the sport of boxing, Scoby humbly answered, “Honestly, just waking up the next day. Being a better person each day than I was yesterday. That’s my goal. Keep being great to not just myself but other people as well.” Kurt Scoby is looking to steal the show on Saturday night.

What can fans expect on March 26th? According to Scoby, you’re going to have to purchase a ticket. “Come watch me fight, and then you tell me what kind of fighter I am,” said Scoby to NYFights when asked to describe his fighting style.

Kurt continued, “you tell me what you think about me. All I can do is stay hard and stay in the gym. I’m mentally prepared for it, and physically this is the best camp I’ve been in. I didn’t train for this fight. I lived for this fight. People come and do their training camps. I live mine. It’s an everyday grind. I’m 7-0 in my mind already.”

Born and raised in Brooklyn, New York, Yemeni American Khalid Twaiti (pronounced Tway-tee) has been boxing since he was nine years old and had a deep amateur pedigree. Like Kurt Scoby, Khalid too is trained by Don Saxby and fights out of Gleason’s gym. Saxby has been in Khalid’s corner since the boxer was nine-years-old. The duo has won the New York City Golden Gloves championship, competed in the Olympic Trials, and won national tournaments.

Currently undefeated as a professional, Khalid is ready to become a household name in boxing. “We are coming to take over the game. Boxing needs something new and fresh. I feel I’m that guy,” said Twaiti. So, what’s the new and the fresh? “Personality, charisma, and a different style. Someone that can box, bang, and do it all. Bring something exciting to the game. Something like Ali. There hasn’t been anything like him since; I might be the next. Honestly, it’s about standing for something worth standing for,” said Twaiti passionately.

New York has a variety of sports in which young kids can participate. So, I asked Khalid why he chose to become a boxer. Twaiti chuckled and said, “Man, sometimes I ask myself that question. Yo, honestly, I was always a fighter. Growing up, I always fought in school. I love to compete, and I always had a fighter’s mentality. My family are big fans of boxing and watched boxing on T.V. I used to always tell my dad to take me boxing.”

Twaiti continued, “But he thought boxing was too dangerous, so my uncle took me when I was nine years old, and ever since then, I went to the gym every day, and I worked hard.” After reading a New York Daily News headline, Khalid donned the alias “Pure Gold.” The headline read, “Brooklyn’s Twaiti is pure gold.” Every day people inspire Khalid. “Just knowing that there are people in the world fighting bigger battles. I know I’m going to the ring and boxing, but there are people out there fighting for their lives. And that’s what keeps me driven, focused, determined and gives me that push to go hard every single day.”

What can fans expect from Khalid on Saturday night? “I take a little from everyone Ali, Prince Naseem, Mayweather, Sugar Ray Leonard, and all the greats. That’s what makes me Khalid Twaiti. I try to move my head and not get touched. But don’t get me wrong, if we are in the pocket, I will bang it out with you. But I’m not afraid to dog it out,” said Twaiti.

Khalid Twaiti is ready to elevate his career to the bigger stage. “I’m about to be 10-0, and I really want to start crunching down on these guys. I feel like I’m the guy at the 118 bantamweight division. I’m ready to dog it out. Once we get through this one, God willing, I’m ready to show them. Give me whoever; I’ll crush them and show them who pure gold is,” concluded Twaiti.

Atlantic City may no longer be the marquee venue related to World Championship Boxing. But that doesn’t mean that great fights don’t happen there. Rising Star Promotions and Thomas “Cornflake” LaManna have put together a group of young talented boxers guaranteed to put on great fights. How do I know? Because of fighters like Kurt Scoby and Khalid Twaiti. Fighters that are motivated every day to be better boxers and better people. These fighters are consciously and socially aware of life inside and outside the ring. Therefore, they understand their platform and understand the responsibility to be great for themselves, their team, and the fans that support them.