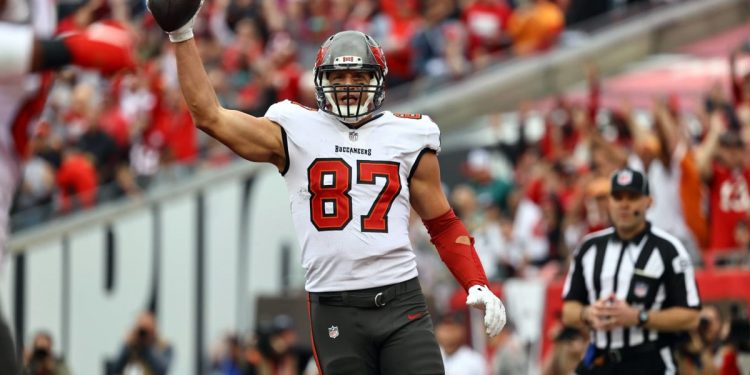 Rob Gronkowski is still undecided on whether he will play in the NFL this year, but he will only play for one team if he decides to return.

“There’s one thing, if I do play football, though, it would definitely be with the Bucs,” Gronkowski said, via PEOPLE’s Lanae Brady.

Gronkowski’s relationship with Tom Brady may be a factor when Gronkowski makes a decision. When Brady first signed in Tampa Bay in 2020, Gronkowski came out of retirement to play with him, so now that Brady is back it is probably more likely Gronkowski is too.

Tampa Bay reportedly wants to bring him back for another year. Additionally, the tight end said he’s enjoyed his time with the Buccaneers over the past two years.

“Just the teammates there that I’m so familiar with and the organization is just A-plus. I’ve been in that decision mind for the last couple months, since the end of the season,” he said.

However, Gronkowski mentioned he will take his time to make up his mind.

“I’m just really taking my time. The season doesn’t really start for another three, or four months. So it’s actually great not to really be signed with a team because it’s just that freedom,” he says.

Gronkowski is no stranger to preparing for the season in a shorter period of time, and Tampa Bay traded for his rights on April 21 in 2020.

The Buccaneers tight end depth chart is currently thin after O.J. Howard signed in Buffalo, with Cameron Brate and Codey McElroy the only two players at the position.