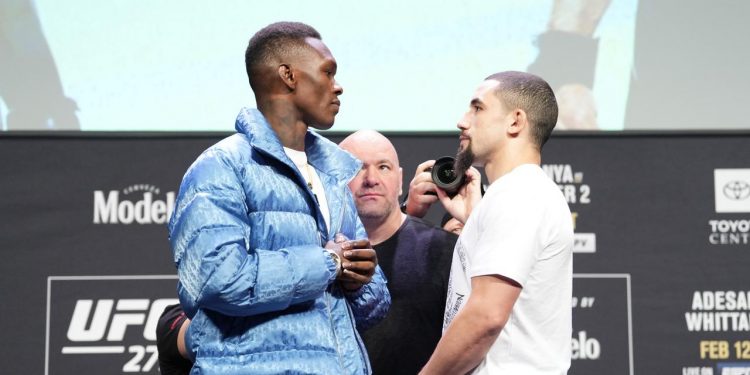 
Robert Whittaker has this week been interviewed, analysed, even torn apart like some biology frog by everyone but that one fella who knows him best.

A bearded brawler from western Sydney who, outside the grappling classes he teaches at Whittaker’s Smeaton Grange gym, or wrestling session with reigning NRL premiers Penrith, exists largely in anonymity.

But know that when it comes to Sunday’s UFC 271 blockbuster between Whittaker and UFC king Israel Adesanya, nobody knows the Aussie half of said showdown better.

Same as when it comes to the changes Whittaker has made since losing Australia’s first UFC title in 2019, none have seen more, or felt it on the mats, quite like this guy.

But get asked about it?

Which is strange, right?

Especially when knowing the biggest question to the biggest fight in Australian UFC history is this: How is Whittaker different enough to get this done?

After all, when losing his middleweight crown to Adesanya before a record UFC crowd of almost 60,000, Bobby Knuckles was kayoed not once – but twice.

With only the first round bell preventing an outcome which arrived early in the second.

So again, how is Whittaker different? What’s changed?

And is it enough to beat a New Zealand phenom all bling, blinding hands and the biggest UFC contract owned by any fighter not named Conor McGregor?

Which is why this week in Houston, Texas, we tracked Malkoun down.

Keen to pick the brain of Whittaker’s long-time training partner who, nine years ago, and as an overweight teen, was taken by the old man to what both thought was a local boxing gym.

No, instead, it was an MMA sweathouse where a CityRail electrician named Whittaker trained.

Back then, just five or six wins into a professional career that would eventually morph into one of the greatest UFC middleweight records of all time.

A chunk of which, you should know, is now credited to Malkoun.

A fighter who has himself transformed from 115kg park footballer to UFC middleweight who also teaches defence at Panthers with Whittaker and the pair’s head coach Alex Prates.

So this week while walking through the fighter hotel, dressed down in tracky dacks and slides, we stopped the quietly-spoken Malkoun to ask the only question that matters.

“More comfortable,” Malkoun he started when quizzed on the changes to Whittaker since not only the loss, but subsequent disappearance to deal with what he later revealed was physical and mental burnout.

“But you can see he’s more comfortable in himself now. Happier.”

Importantly, it is this happiness, Malkoun continued, that has seen his mate not only embracing the grind like never before, but also “improve out of sight”.

But the real kicker?

“Rob’s always been the better fighter,” he stressed.

“Yes, he got caught on the night. And this will again be a tough fight.

“But Rob has more skills than Israel. He’s the better fighter and always has been.”

Which is absolutely worth discussing.

Specifically, what if all the things Whittaker was suffering around that first showdown – the burnout, pressure, hating his rival, even an injury history which included emergency surgery on a twisted bowel – means the difference between him and his megastar rival are much less than everyone thinks?

But remember also he fought uncharacteristically reckless, leaping after a guy like he were in some Jackass skit.

Which is why former UFC champions Michael Bisping and Chris Weidman are both tipping an upset, with the latter expecting a Whittaker wrestle game that, even if not enough to keep Adesanya down, will accrue points and make his rival “more timid” when standing.

Esteemed analyst and former fighter Dan Hardy can also see a Whittaker submission win, predicting for the Submission Radio podcast “arm triangles and rear-naked chokes all day in the fourth and fifth rounds”.

Even Whittaker himself, when cornered on media day, agreed he and Adesanya were far closer in skill than that first fight suggested.

“Although I’m not taking anything away from his first win — he beat me handily,” he said.

“But, yeah, I do think our skill levels are much closer.

“What I can say though is that if I give my best performance I’m happy. And I did not do that in our first fight.”

Back with Malkoun, he also revealed the pair’s work at Panthers this past year had also provided both fighters with some unlikely motivation.

Yet on his return to Australia, he and Whittaker took up as wrestling coaches with a Panthers team that had just suffered its heartbreaking grand final defeat.

“But watching the way they returned to training, the attitude they brought, I really learned a lot from that,” he said.

“Rugby league games are like a fight. Carry the same pressure.

“And it’s so great to be part of what happened there.”

Of course, history now shows what happened was the Panthers recovered to win the NRL grand final, just as Malkoun won next up and is now set to face undefeated American AJ Dobson.

So as for Whittaker’s own great shot at redemption?