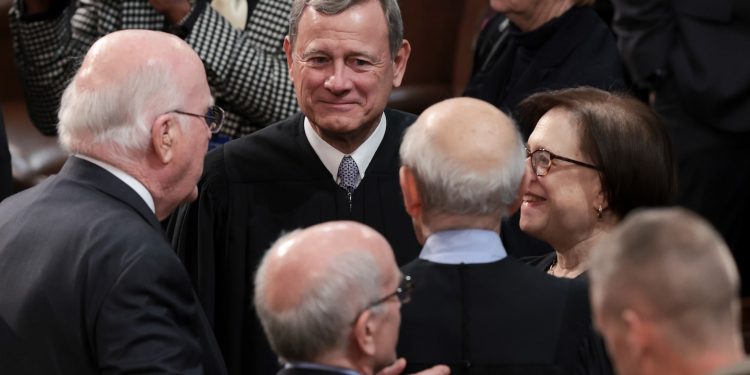 Conservatives on the Supreme Court on Wednesday reinstated for now a Trump-era environmental rule that limited the ability of states to block projects that could pollute rivers and streams, a decision more notable because Chief Justice John G. Roberts Jr. joined liberals in calling it an abuse of the court’s emergency powers.

The five members of the court who granted the request from Louisiana, other states and the oil and gas industry did not explain their reasoning, which is common in emergency requests at the court.

But Justice Elena Kagan, dissenting along with Roberts and Justices Stephen G. Breyer and Sonia Sotomayor, said her conservative colleagues were turning what critics have called the court’s “shadow docket” into something it was never intended to be.

The majority’s order “renders the Court’s emergency docket not for emergencies at all,” Kagan wrote. “The docket becomes only another place for merits determinations — except made without full briefing and argument.”

Kagan said the applicants had waited months to bring the request and provided no evidence that they would suffer irreparable harm if the Supreme Court did not intervene, which is one of the essential elements necessary for putting on hold a lower court’s order.

Democratic members of Congress have been increasingly critical of the court’s use of the emergency docket, which has expanded since Justice Amy Coney Barrett joined the court to provide a more consistent conservative majority. She granted the stay along with Justices Clarence Thomas, Samuel A. Alito Jr., Neil M. Gorsuch and Brett M. Kavanaugh.

Stephen Vladeck, a University of Texas law professor who has documented the court’s use of the shadow docket, said Wednesday’s order was significant for what it says about the chief justice’s role on the court.

“This is the ninth time that Chief Justice Roberts has publicly been on the short side of a 5-4 ruling since Justice Barrett’s confirmation,” Vladeck said. “Seven of the nine have been from shadow docket rulings. This is the first time, though, that he’s endorsed criticism of the shadow docket itself.”

The fight is over a rule put forward by the Environmental Protection Agency during the Trump administration. It limited objecting states’ ability to stop pipeline and other projects that could pollute navigable waters regulated by the Clean Water Act, reacting to complaints that some states and Native American tribes were abusing their discretion.

A coalition of states and environmental groups challenged the rule, saying it was at odds with 50 years of environmental regulations. After President Biden was elected, the agency said it would revise the rule and asked judges in three cases filed against the regulation to return the rule to the agency.

Two did, but a third, Judge William H. Alsup in San Francisco, vacated it nationwide. Louisiana and other plaintiffs defending the rule appealed to the U.S. Court of Appeals for the 9th Circuit, but judges there declined to put Alsup’s order on hold while they considered the case. That’s when those states went to the Supreme Court.

If allowed to stand, Louisiana and groups such as the American Petroleum Institute told the court, “the district court’s decision will become an easy-to-replicate blueprint for a new Administration’s premature elimination of rules adopted by the prior Administration, with the help of aligned plaintiffs and a single, sympathetic district court.”

Solicitor General Elizabeth B. Prelogar, representing the EPA, acknowledged in her reply to the Supreme Court that Alsup “lacked authority to vacate the 2020 rule without first determining that the rule was invalid.” But she said his ruling only returned the regulations to the status quo while the agency came up with a new rule.

Barrett in an address Monday told a California audience that in judging the court’s actions, citizens should read the court’s ruling. But a frequent criticism of the court’s “shadow docket” decisions is that often no reasoning is provided. That was true in Wednesday’s order.

Kagan, in her dissent, said the court’s precedents allow emergency intervention only in “extraordinary circumstances,” including that one of the parties will suffer irreparable injury.

The states wanting to stop Alsup’s decision did not even attempt that, she said.

Kagan noted that action in the appeals court is imminent, and that by intervening without full briefing and argument, the Supreme Court majority “signals its view of the merits.”

Kagan and the court’s other liberals have become frequent critics of the shadow docket. And while Roberts has sometimes been on their side regarding the outcome of one of the emergency petitions, it is the first time he has joined their criticism of the process.

Fungi speak in a similar language to humans, and this isn’t a mushroom joke

Dug Up with Dogster: April 2022 Dog Events and Holidays

Dug Up with Dogster: April 2022 Dog Events and Holidays