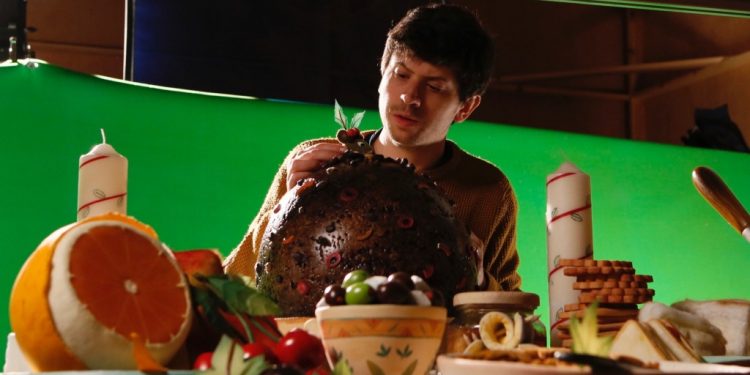 Robin Robin follows Robin (Bronte Carmichael), a young bird raised by a family of mice after her egg rolls into a dump. As she grows up and the differences between her and her family become more apparent, Robin sets off on a heist to prove that she can be just as good of a mouse as them. Richard E. Grant, Gillian Anderson, and Adeel Akhtar also voice characters.

This musical animated short has been shortlisted for the Best Animated Short category at the Oscars. Robin Robin was produced by Aardman Animations and is streaming on Netflix.

DEADLINE: What was the inspiration for Robin Robin?

AND OJARI: I think the starting point was thinking about the tradition of an animated Christmas special, which me and Mikey love dearly, and they’re a big part of the UK Christmas celebrations. A very known one is Raymond Briggs’ The Snowman, but also all of the Wallace and Gromit films that came out every Christmas and sort of became part of the background of Christmas Day.

And it dawned on us, that’s a wonderful platform to tell a story, having a whole family gather around and watch, particularly an animated short. And we make animated shorts, that’s what we were doing as a filmmakers, and we thought, “oh, that would be an amazing kind of thing to make.”

And it was actually my wife that mentioned that robins are quite Christmas-y, and we should make something about robins. It was about eight years ago, I think, we came up with the beginning of the story, and the main parts of the story, I guess, about a robin brought up by a family of mice, and getting roped into this bizarre heist to steal a star on top of the Christmas tree.

MIKEY PLEASE: I think there’s something we both really love about the short form medium. We think short films are amazing ways to encapsulate a story and they’re often really clear and have something very special around them, like the Christmas special anomaly, in which an otherwise ignored art form is once a year welcomed into people’s households. So, I think that’s another reason why we were drawn to the one exception in which the art form that we seemed to be making was culturally embraced.

DEADLINE: All of the characters have this fuzzy appearance of felt that is reminiscent of those old holiday animations. What was the thought process behind you bringing that in?

OJARI: Yeah, the needle felt, it was actually right from the beginning, we loved the idea of making the characters out of needle felt. And I think it probably came from a lot of Christmas decorations that, in the UK anyway, that are hung on trees that are needle felted. And they’ve got this really warm… I don’t know, they’re very traditionally made.

And also, they’re often characters, and they seem very endearing, even the simplest character made in this technique, that seems to have a life to it. So, we love that. There’s some brilliant needle felt animations and films out there that we were aware of, and we love them for the way they embraced it.

It was actually only afterwards, that I’ve been really getting into the US classic Christmas films that you watch, like the Rudolph films. And I noticed that they are kind of felted in a way as well, which is strange to not make that connection.

PLEASE: I haven’t even seen those, are they needle felted?

OJARI: They are, yeah. They’re very tightly needle felted, so they don’t really play with the medium hugely, but I think it is felted. And so, I think using a material like felt, which is kind of like fabric, it’s sort of very clearly handcrafted and physical on camera. Like some materials you use, you film them and you kind of lose what they’re made out of in the material.

And perhaps by having that very grounded material in the center of the screen, which is always what our characters were being made from, it allowed us to go a bit more cinematic with everything around them so we could push the boundaries of the stop motion look to be as epic as possible. Because it was always going to be very, very grounded in the heart of it with these felt characters.

DEADLINE: Can you talk about playing with scale? How big did you build the figure of Robin?

PLEASE: The main performance puppets were like 170% real life, so just under double size. But we had three scales. We had three scales of puppets and then there were four scales. There was a lot of juggling between sets and lots of pre-production meetings of like, is this A-scale, B-scale, or C-scale? It’s an A-scale foreground, but a D-scale background. And we’re going to have to convince some C-scale puppets along the way.

So, there’s loads of juggling, but the C-scale puppets were really tiny, about one centimeter tall. They were slightly bigger, but really, really tiny. And they would be to fit into the smaller model sets that we’d make. For example, the living room was where they did the heist, was one of the C-scales sets. But then we also had a B-scale cat with a real-life cat size.

But then the A-scale robin was the 170%. So, whenever those two had to interact, it was quite tricky. We had to do lots of split screen, and matching camera angles, and all sorts of those things that make them feel like they’re in the same space.

OJARI: It was really amazing walking around the art department workshop where they made all these sets, because as Mikey was saying, there was four different scales. And they were really dramatically different, but they were all being built at the same time, in the same place, by the same team. So, you’d kind of walk around and it would just be such a great experience of scale. You’d feel really huge, and then walk around the corner, you’d be a shrunken version. You’d feel tiny in this massive kitchen. It was loads of fun.

PLEASE: Like we were sipping from the caterpillar’s tea party in Alice in Wonderland with every door we pass through.