Robinhood Stock: Watch For A Leg Lower Into Q1 Earnings 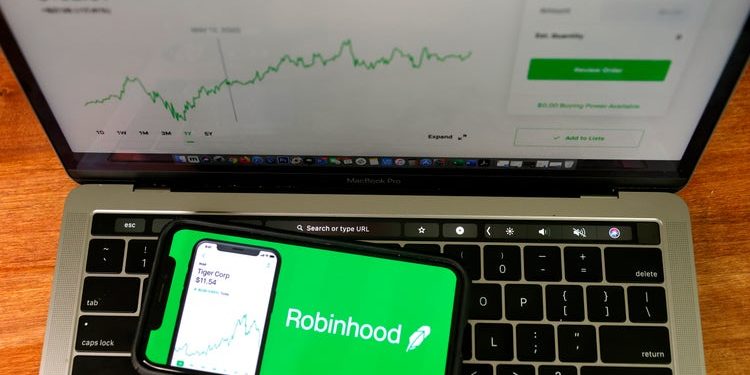 
Robinhood Markets Inc. (NASDAQ:HOOD) is recognized for pioneering commission-free trading with an easy-to-use brokerage platform. The company rode a wave of user growth momentum during the early stages of the pandemic with the allure of strong market gains into its 2021 IPO. Unfortunately, shares of HOOD have been nothing short of a disaster, down by over 70% in the last 6 months amid a drop in active users adding to concerns over the long-term earnings outlook.

Our take is that the weak market performance and more volatile trading conditions are the biggest growth headwinds, directly impacting near-term financials. Ahead of the upcoming Q1 earnings report, we see room for HOOD to disappoint expectations while its valuation is likely still too high.

2021 was a big year for Robinhood which added over 10 million funded accounts on the platform, reaching nearly $100 billion in assets under custody and delivering 89% revenue growth. Indeed, these are impressive accomplishments that help explain the company’s peak valuation which briefly reached $60 billion last year.

That said, the problem here is an understanding that those trends were simply not sustainable with the more recent quarterly data disappointing. The stock’s current market cap of just under $10 billion highlights not only the reset valuation but what was likely unrealistic optimism at the top.

The company last reported its Q4 results in late January with revenue of $363 million increasing 14% year-over-year, a far cry from the 131% increase posted in Q2. By this measure, HOOD is no longer a “high-growth” name, facing tough y/y comps. The other point here is that losses have accelerated. Negative Q4 EPS of -$0.49 reversed a marginally positive $0.02 result in Q4 2020 when the company was still private.

High levels of share-based compensation, totaling $1.6 billion in 2021, have added to expenses. Excluding this amount, as well the accounting procedure of a change in fair value change of convertible notes and warrants, the adjusted EBITDA in 2021 at $34 million declined from $155 million in 2020. Overall, the company is attempting to invest in growth through more technology and headcount. The trend in earnings is sharply lower here with the Q4 adjusted EBITDA negative at -$87 million expected to continue through 2022.

As it relates to the balance sheet, the company ended 2021 with $6.3 billion in part related to IPO proceeds. While the company is not carrying long-term debt which is a strong point on the liquidity side, negative earnings and an ongoing cash bleed will work against the balance sheet.

The bulk of revenues is related to transaction volumes across different segments between equities, options, and cryptocurrencies trading. While trading is commission free to users, Robinhood gets compensated by routing orders to market makers for execution. The model based on payment for order flows, essentially adding liquidity to markets, is dependent on more active users on the platform. Here 17.3 million active monthly users in Q4 were down from 21.3 million in Q2. The result is that transaction-based revenues while up 12% y/y were down 42% from $451 million at its peak in Q2.

We believe this is a problem going forward considering the current market environment defined by poor returns in stocks with the S&P 500 (SPY) and NASDAQ-100 (QQQ) at or near a correction territory from their 2021 highs, each down by 8% and 12% respectfully this year. Individual stocks particularly small-caps and high-growth names that get traders excited have fared even worse with deeper losses.

In other words, it’s hard for Robinhood to get a new group of investors on board to open an account and deposit money when the trading environment is more difficult. This is in contrast to the second half of 2020 and into early 2021 when seemingly “every” stock just went up. Similarly, there’s a thought that many Robinhood investors may have become disillusioned by poor market performance-limiting overall trading activity this year.

So the impact on Robinhood into 2022 is two-fold. First, we expect another decline in monthly active users for Q1. From there, assets under custody should also take a hit considering the market value of open positions and unrealized gains within user accounts adjust lower.

The setup here is for a weak Q1 report from Robinhood when it reports on April 28th, after the market closes. The company last guided for Q1 revenue of “less than $340 million” which implies a year over year decline of 35% against strong market performance which boosted trading activity in Q1 2021. Curiously, the current market consensus is a bit stronger at $357 million, as an average of nine Wall Street estimates ranging from $328 million to as high as $398 million. We’ll take the under.

There are other moving parts beyond just the equity market. Robinhood has been betting on cryptocurrency trading and digital assets as part of its long-term growth strategy. Robinhood has launched crypto wallets for all its customers on the mobile app. The company is also moving to integrate with Bitcoin (BTC-USD) “Lightning Network” which enables faster transactions for payments and transfers.

Here, it’s worth mentioning that the price action in crypto has been sluggish this year with Bitcoin (BTC-USD) down by about 15% year-to-date and also 42% off its all-time high last year. This is another case where the subdued market momentum has likely hit sentiment, particularly among small-retail traders as Robinhood’s target clientele.

The company is also up against intense competition from crypto leaders like Coinbase Global Inc (COIN) which offers similar services through a crypto-specific platform. Even with a bullish long-term outlook on crypto, we don’t see it moving the needle for Robinhood in the near term. For context, cryptocurrencies trading represented less than 20% of total revenue in Q4.

For the year ahead, the market consensus is for Robinhood’s revenue to reach $1.8 billion, up just 1% year over year. The expectation is that the growth initiatives including the payments options, international expansion, and long-term investing tools can again accelerate growth in 2023 targeting revenues of $2.6 billion, up 41% y/y. We’re skeptical of this pivot and see a downside to these estimates. The market does not expect HOOD to be profitable through at least 2025 which implies upwards of $3 billion in losses over the period.

As it relates to valuation, the silver lining is that HOOD is trading at a forward sales multiple of 5.6x or even 2x net of cash, well off the peak valuation when shares traded at a price to sales multiple near 25x. The bearish angle would say that this discount is justified considering the current operating and financial trends and outlook for recurring negative cash flows. Simply put, the stock can still get cheaper if the growth outlook is revised lower.

Putting it all together, we have several reasons to be bearish on HOOD. As a quasi-fintech slash brokerage platform, the company is highly exposed to financial market conditions and the reality is that the recent growth trends on a quarter-over-quarter basis leave a lot to be desired. If the major stock market indexes break down, whether it be due to a looming recession or slowdown in consumer spending, we expect HOOD to underperform again.

On that point, there is a component to the company’s operating outlook that is based on discretionary spending. Potential Robinhood customers that are being pinched from high inflation are going to be less likely to have extra investable assets to try their luck in stocks.

From the stock chart, it appears the ~$10.50 stock price has acted as a measure of technical support, bouncing off that level a few times in 2022. We see risk tilted to the downside and rate shares of HOOD as a sell. In terms of a price target, a breakdown into the Q1 report could open the door down to $8.50 as our price target implying a 4x price to sales multiple on the current consensus 2022 revenue. For most investors, the call here is to simply avoid HOOD against poor fundamentals and too many uncertainties.

What we can say is that to the upside, a few things need to happen. For Robinhood, a potential resolution to the Russia-Ukraine conflict would likely be positive for broader market sentiment and add a boost to operating trends. If there is a scenario where the stock market is going to rally strongly back towards an all-time high and get high-growth momentum-type stocks delivering multi-bagger returns, we would also expect Robinhood to benefit from such an environment although it’s unlikely in our view. For the Q1 report, user metrics and assets under custody are the key monitoring points.