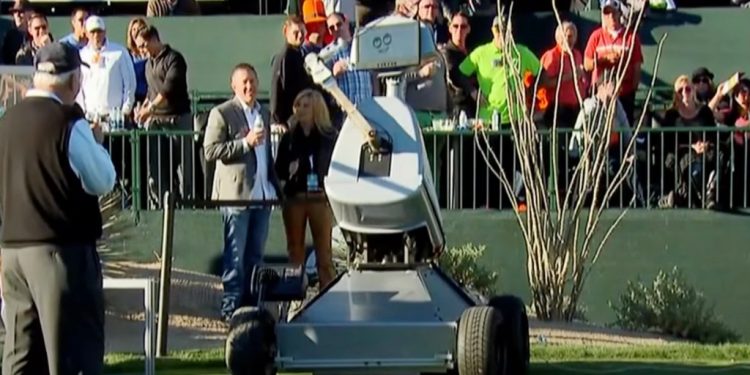 
Tiger Woods might be absent from this year’s Phoenix Open.

But that hasn’t stopped fans reminiscing on one of the craziest holes-in-one in golf history.

A robot named after the 15-time major champion nailed an incredible ace at TPC Scottsdale six years ago.

LDRIC – in homage to Woods’ rarely used first name Eldrick – made the shot on the rowdy 16th hole.

The par-3 is famous for its raucous galleries of 20,000 beer-swilling fans surrounding the green.

Woods himself made a sensational hole-in-one on the same hole back in 1997.

That was in his first season as a professional and the crowd went wild for the new kid on the block.

Fast forward 19 years and the fans were going just as crazy as the pinpoint robot sank the same shot.

LDRIC was created by Gene Parente, the owner of Golf Laboratories Inc.

The robot is reportedly used in the golf industry to test new clubs and made the 163-yard ace with stunning accuracy.

California’s Sahith Theegala is currently leading this year’s Phoenix Open on -7 after first-round play was suspended due to bad light.

Clues Your Teen May Be Facing a Mental Health Challenge