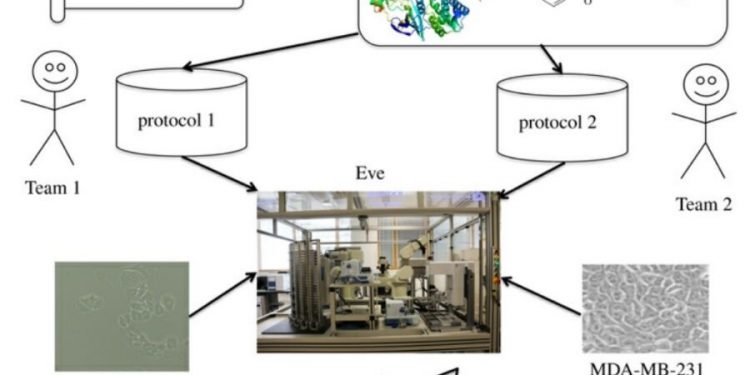 
Researchers have used a combination of automated text analysis and the “robot scientist” Eve to semi-automate the process of reproducing research results. The problem of lack of reproducibility is one of the biggest crises facing modern science.

The researchers, led by the University of Cambridge, analyzed more than 12,000 research papers on breast cancer cell biology. After narrowing the set down to 74 papers of high scientific interest, less than one third—22 papers—were found to be reproducible. In two cases, Eve was able to make serendipitous discoveries.

The results, reported in the Journal of the Royal Society Interfacedemonstrate that it is possible to use robotics and artificial intelligence to help address the reproducibility crisis.

“Good science relies on results being reproducible; otherwise, the results are essentially meaningless,” said Professor Ross King from Cambridge’s Department of Chemical Engineering and Biotechnology, who led the research. “This is particularly critical in biomedicine: If I’m a patient and I read about a promising new potential treatment, but the results aren’t reproducible, how am I supposed to know what to believe? The result could be people losing trust in science.”

“One of the big advantages of using machines to do science is they’re more precise and record details more exactly than a human can,” said King. “This makes them well-suited to the job of attempting to reproduce scientific results.”

As part of a project funded by DARPA, King and his colleagues from the UK, US and Sweden designed an experiment that uses a combination of AI and robotics to help address the reproducibility crisis, by getting computers to read scientific papers and understand them, and getting Eve to attempt to reproduce the experiments.

For the current paper, the team focused on cancer research. “The cancer literature is enormous, but no one ever does the same thing twice, making reproducibility a huge issue,” said King. “Given the vast sums of money spent on cancer research, and the sheer number of people affected by cancer worldwide, it’s an area where we urgently need to improve reproducibility.”

From an initial set of more than 12,000 published scientific papers, the researchers used automated text mining techniques to extract statements related to a change in gene expression in response to drug treatment in breast cancer. From this set, 74 papers were selected.

Two different human teams used Eve and two breast cancer cell lines and attempted to reproduce the 74 results. Statistically significant evidence for repeatability was found for 43 papers, meaning that the results were replicable under identical conditions; and significant evidence for reproducibility or robustness was found in 22 papers, meaning the results were replicable by different scientists under similar conditions. In two cases, the automation made serendipitous discoveries.

While only 22 out of 74 papers were found to be reproducible in this experiment, the researchers say that this does not mean that the remaining papers are not scientifically reproducible or robust. “There are lots of reasons why a particular result may not be reproducible in another lab,” said King. “Cell lines can sometimes change their behavior in different labs under different conditions, for instance. The most important difference we found was that it matters who does the experiment, because every person is different.”

King says that this work shows that automated and semi-automated techniques could be an important tool to help address the reproducibility crisis, and that reproducibility should become a standard part of the scientific process.

“It’s quite shocking how big of an issue reproducibility is in science, and it’s going to need a complete overhaul in the way that a lot of science is done,” said King. “We think that machines have a key role to play in helping to fix it.”