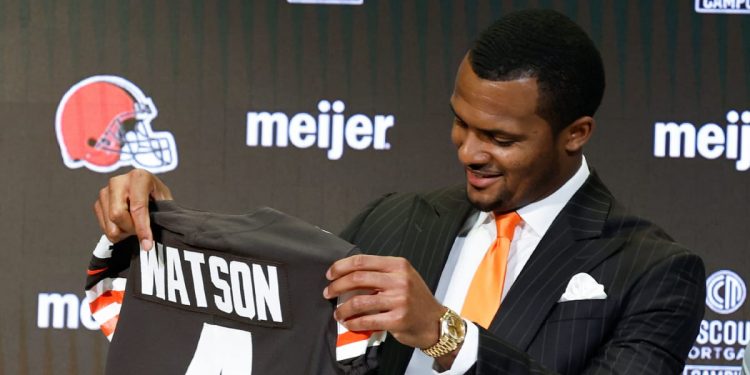 Editor’s note: This story contains accounts of sexual assault. If you or someone you know is a survivor of sexual assault, contact the National Sexual Assault Hotline at 1-800-656-4673 or at https://www.rainn.org.

Although Roger Goodell confirmed the league’s investigation into Deshaun Watson is still ongoing, the commissioner is reportedly not the one who will determine whether the quarterback violated the personal conduct policy, per the 2020 collective bargaining agreement.

A source told Yahoo Sports that, instead, it is expected to be former U.S. District Court Judge Sue Robinson, someone both the NFL and NFLPA agreed to act as an impartial arbitrator with disciplinary cases similar to Watson’s.

Goodell had previously been able to act unilaterally before the new CBA. Regardless of who determines the outcome of the investigation, Watson still faces three possibilities: fine, suspension or no punishment.

“We’ve been very clear over the last year that the civil cases were at play over the last year; the only thing that has changed is the criminal element that has been at least resolved,” Goodell said. “And that was an important element in the context of the commissioner’s exemption that we have discussed with our players association. So, if the criminal had proceeded, that would’ve more likely triggered a commissioner’s exempt. I think at this point the civil cases in it of itself would not do that. If there is a violation of the personal conduct policy, that may trigger something. But it would more likely trigger some type of discipline in some fashion.”

The former Texans quarterback was recently traded to the Browns in a blockbuster five-year, $230 million fully guaranteed deal, a record-setting contract that became the largest guaranteed contract in league history. However, Watson still faces extensive legal trouble—22 active civil lawsuits that allege sexual harassment and assault during massage therapy sessions. The lawsuits describe accounts that range from the quarterback’s refusing to cover his genitals to “touching [a plaintiff] with his penis and trying to force her to perform oral sex on him.”

On March 11, a Harris County grand jury returned nine “no” bills on nine criminal complaints against the then Texans quarterback. A Harris County prosecutor said that the decision concluded criminal proceedings against him in that county, and Watson was traded shortly afterward. A grand jury in Brazoria County declined to charge Watson on a 10th count Thursday.

Although the criminal proceedings have concluded in both counties, the civil depositions, which began on the same day the first grand jury convened, are ongoing. The quarterback reportedly invoked the Fifth Amendment during the first two depositions, but he reportedly answered questions under oath several days after the criminal proceedings concluded in Harris County.

The trade was announced before the Brazoria County grand jury considered a criminal complaint but after Watson had answered questions under oath in the deposition for the civil cases.

Watson denied assaulting, harassing or disrespecting any woman during his introductory press conference with the Browns on Friday.

“I understand these allegations are serious. I never assaulted any woman. I’ve never disrespected any woman,” Watson said. “I was raised to be genuine and to respect everyone around me. … I’ve never done the things that these people are alleging.”

In the wake of the trade, the Cleveland Rape Crisis Center received more than 1,800 donations in response, raising more than $88,000 in under one week as of Friday morning. The agency released a statement March 19 in response to the trade, saying in part, “We understand the story surrounding Deshaun Watson joining the Cleveland Browns team is triggering for far too many of our friends and neighbors. For those who need additional support, please know Cleveland Rape Crisis Center is available to you 24/7/365.

“To the community we say, we see you. We hear your outrage. We feel it too. Every click. Every post and every tweet. Every donation sends a clear message.”

There is another eye-catching detail built into his Browns contract: For every game Watson is suspended, the quarterback will lose only $55,556. His base salary is just $1 million in 2022, per NFL Network’s Ian Rapoport. If Watson had stayed with the Texans, he would have lost $1.94 million for every game in which he was suspended.

As the civil deposition proceedings continue, here’s a recap of what has happened on and off the field since Watson’s last snap.