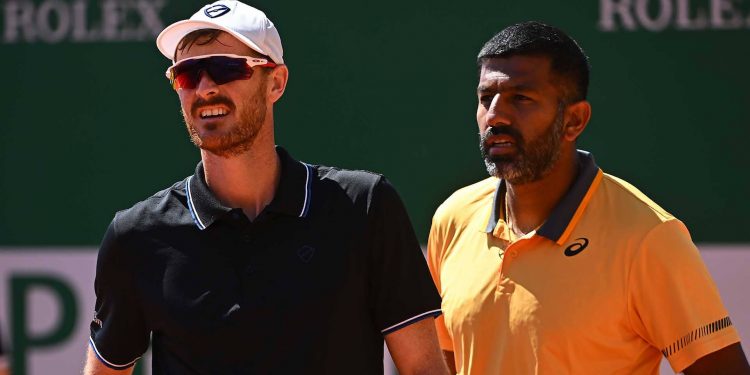 On a dramatic day of doubles action at the Rolex Monte-Carlo Masters, the first-time pairing of Rohan Bopanna and Jamie Murray won an extended Match Tie-break to successfully open their account on Monday.

The Indian/British duo scored a 2-6, 6-3, 12-10 victory over Miami finalists Wesley Koolhof and Neal Skupski, completing the comeback on a third match point. After both Bopanna and Murray dropped serve in the opening set, the duo broke both opponents in the second to force the decider. Down 1/5 in the Match Tie-break, they clawed back two mini-breaks as part of a late surge to take the match.

While Bopanna and Murray have competed against each other 12 times on the ATP Tour, including three times in Monte Carlo, this was their first time playing on the same side of the net. Their maiden victory sets up a second-round meeting with Americans Taylor Fritz and Sebastian Korda, who took a 6-3, 7-5 decision over Kevin Krawietz and Andreas Mies.

That was the only Monte Carlo doubles match not decided by a Match Tie-break on Monday. Aslan Karatsev and John Peers saved a match point in the second-set tie-break before notching a 4-6, 7-6(9), 10-8 win over Austin Krajicek and Edouard Roger-Vasselin.

The doubles opening round will conclude on Tuesday, with two second-round matches also on the schedule, including fourth seeds Pierre-Hugues Herbert and Nicolas Mahut taking on Marcelo Melo and Alexander Zverev.