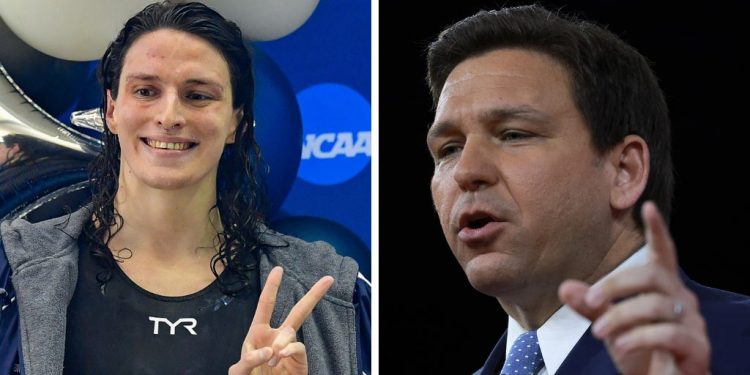 In a statement uploaded to Twitter on Tuesday, the governor said he was declaring the second-placed University of Virginia swimmer Emma Weyant the “rightful winner” of Thursday’s 500-yard women’s freestyle event.

Weyant, an Olympic silver medalist, finished more than a second behind Thomaswho made history by becoming the NCAA’s first-ever transgender champion in Division I swimming.

“It is my determination that men should not be competing against women such as Emma Weyant, robbing women and girls of achievements, awards, and scholarships,” DeSantis wrote, referring to Thomas as a “male identifying as a woman.”

He then accused the NCAA of making “efforts to destroy women’s athletics” and expressed his disapproval of the “NCAA elevating ideology over biology.”

DeSantis then declared Weyant, who is a Floridian, the “rightful winner of the 2022 NCAA Division 1 Women’s 500-yard freestyle.”

“By allowing men to compete in women’s sports, the NCAA is destroying opportunities for women, making a mockery of its championships, and perpetuating a fraud,” DeSantis said in his tweet alongside the statement.

“In Florida, we reject these lies and recognize Sarasota’s Emma Weyant as the best women’s swimmer in the 500y freestyle,” DeSantis added.

Thomas had competed on the University of Pennsylvania’s men’s swimming team for three years before transitioning. She began competing on the college’s women’s team in 2020.

After posting a series of record-breaking times, Thomas received pushback from her Penn teammates and faced anti-trans protests at swim meets.

However, she has also received heartwarming messages of support from other swimmers, including Erica Sullivan, the Olympic silver medalist who placed third after Thomas and Weyant in last week’s event, and Yale swimmer Iszac Henig, who is a transgender man.

Thomas has expressed her interest in competing beyond the college circuit and is eyeing the 2024 Summer Olympics in Paris.