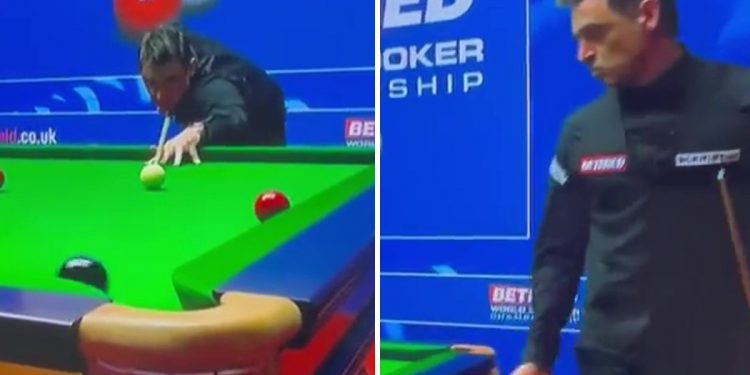 
RONNIE O’Sullivan had enough in the tank to overcome David Gilbert in the snooker World Snooker Championship.

‘Rocket’, 46, came from behind to win 10-5 at the Crucible – but this performance will be remembered for other reasons.

Winning seven frames to five, O’Sullivan was lining up a routine black to continue a break.

However, with just 28 points on the board he inexplicably missed the easy pot.

And Ronnie wasn’t shy of showing his dissatisfaction with his effort, and was caught on BBC cameras doing an x-rated hand gesture soon after.

It didn’t matter though, as O’Sullivan would go on to win the frame before sealing his place in the second round. 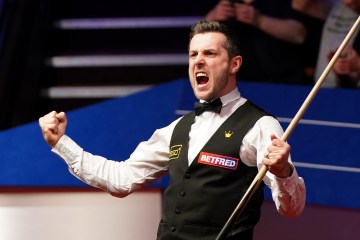 The sports legend is aiming for a record-equalling seventh world title, but needed to be at his best after trailing 3-0 early on.

However, this week Iranian Hossein Vafaei bashed O’Sullivan by saying the World No1 should retire.

O’Sullivan has also incurred the wrath of John Higgins after suggesting he would not encourage his kids to take up the sport as for many playing snooker is “a waste of life”.

Most read in Other Sports

After beating Lei Peifan 10-9 to qualify for the World Snooker Championship Vafaei, who beat O’Sullivan 5-0 in a match in October, shared his thoughts on the 45-year-old’s comments.

He told The Metro: ” A lot of things he says frustrates me. What kind of legend are you if you call people numpties?

“I was and am still good friends with him, but I don’t like that. Maybe he likes it and gives him a good feeling but I think people should treat him like that as well. I treat him like he deserves.

“Listen, he doesn’t need to remind us he’s won 20 major tournaments. I think someone who is beside him should remind him that he is Ronnie O’Sullivan.

“He’s saying you are poor, I am rich, I am Ronnie O’Sullivan. I don’t like that. I have money, my people in Iran have money, but we have to respect human beings as well.

“I don’t want to get involved in that kind of conversation really. I like him a lot, I am his fan, I love what he does but sometimes he’s disrespectful, he’s not good for the game.