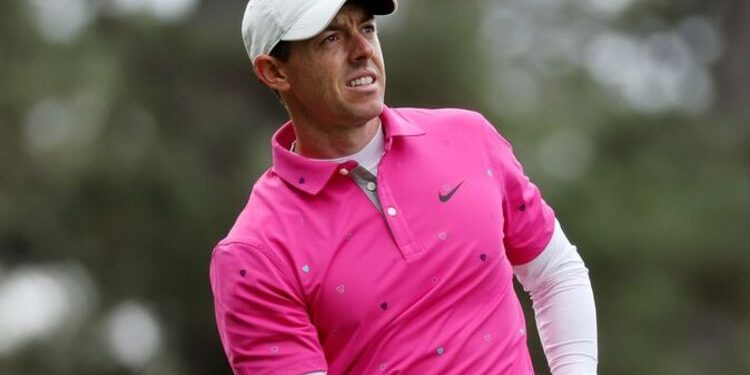 
It was a tough day at the Masters on Friday for everyone in the field but a particularly tough one to be Rory McIlroy. The 32-year-old’s latest tilt at the career Grand Slam was blown off course with a ragged second round in the wind which left his dream of a Green Jacket looking as far away as ever.

Thirty-one of the last 32 Masters winners were in the top ten at the halfway point; the chance would be a fine thing for McIlroy. After another over-par start to a Major on Thursday, he surrendered three shots in the space of two holes at the start of a blustery back nine on Friday to plunge further down a bunched field.

McIlroy claimed before the tournament to be at peace with whatever Augusta has in store for him during his career now but acceptance must sometimes give way to private despair. This is his 14th attempt to win the Masters and so far it has proved a fruitless pursuit.

Plenty of golfers play in plenty of Masters without winning one but McIlroy suffers from the misfortune of not just being any old golfer. His talent makes the gap between ambition and reward since the last of his four Majors eight years ago all the more galling. If it is frustrating for those watching him, imagine how McIlroy must really feel about it.

If goodwill from the galleries counted for anything he would already have the missing garment in his wardrobe. Americans tend to root for Americans but the louder cheers at the first tee were for McIlroy rather than US playing partner Brooks Koepka or the unassuming Englishman Matt Fitzpatrick.

McIlroy is undoubtedly the most popular overseas golfer at the Masters and, alongside Jordan Spieth, perhaps ranked second overall in the popularity stakes behind Tiger Woods. The patrons, rustling along with their Masters merchandise bags, would have loved more of an excuse to cheer him but instead found themselves taking cover as they came under attack from the World No 9 mid-round.

It wasn’t easy for anyone with the capricious winds and some testing pins stirring the Masters pot but McIlroy could not blame the conditions for everything.The round started well enough as he brought admiring gasps from the patrons around the first tee box with a cannonball drive that split the fairway but could not convert his birdie opportunity from eight feet.

He did birdie the par-five second from a distinctly unpromising position in the trees off the tee but after a 15ft par save at the next, gave the shot back with a scruffy three-putt from the fringe at the difficult fifth after missing the fairway to the left.

The scorable eighth came and went with no return after more bother off the tee when he went way right. Turning at level par for the day was no disaster. He was still only five shots behind leader Sungjae Kim as he walked past the giant scoreboard in the valley.

But when he bogeyed the tenth from the middle of the fairway after an awful approach with his seven-foot par putt failing to touch the hole the alarm bells sounded to ring. The second shot into the 11th which arrowed into the crowd to the right triggered a disastrous double bogey. The deep sigh McIlroy let out as he left the green after his four-foot bogey putt slid by looked like resignation.

He is no quitter and he bounced back with birdies at 13 and 16 but the sense remained that a weekend run will be a stretch. The first two rounds have left him a lot to do. Probably too much.