Royals’ eight-day Caribbean tour back on track after rocky start 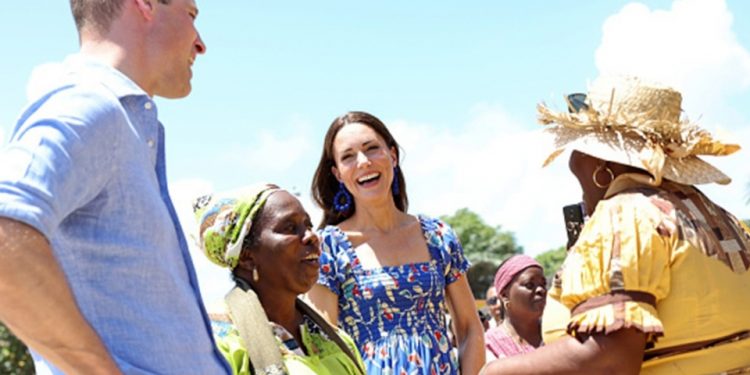 
In their first overseas trip together since the pandemic began, the Duke and Duchess of Cambridge are exploring the Caribbean, greeted by a chorus of dignitaries and well wishers … and protests.

In a series of royal tours throughout the year, the Caribbean trip by Prince William and his wife Kate continues the celebration of Queen Elizabeth II’s Platinum Jubilee, her record 70 years on the throne.

It also comes nearly five months after neighbouring country Barbados voted to become a republic, cutting ties with the monarchy but still remaining part of the British-led Commonwealth of Nations.

However, as the future king and his wife kicked off their royal tour on March 19 in Belize – without their three children – little did they know a scheduled visit to the Akte ‘il Ha cacao farm in the Maya village of Indian Creek was hastily cancelled after villagers staged a protest against their arrival.

In another sign of growing scrutiny of the British Empire’s colonial ties to the region, people in the village said they were upset that they were not consulted about the planned landing of the royal couple’s helicopter on a football field.

Indian Creek is in dispute with Fauna & Flora International (FFI), a conservation group that lists Prince William as a patron.

FFI has property near the village’s communal land, which has caused tensions over ownership rights, according to locals.

The couple is due to stay in Belize, formerly British Honduras, until Tuesday morning.

After Belize, the duke and duchess will visit Jamaica and the Bahamas, where they’ll continue doing some serious public relations on behalf of the Queen as debates over colonial-era oppression continue.

But according to The Independentthe royal couple can expect a frosty welcome in Jamaica.

As the nation celebrates 60 years of independence, a human rights coalition of activists, politicians and musicians have urged the British crown to apologise for colonialism and pay slavery reparations.

The group, which is called the Advocates Network, has staged a protest to occur at the same time as the royals’ arrival in Jamaica.

It is slated to take place near the British High Commission in the capital of Kingston from 10.30am on Tuesday.

In line with Jamaica’s 60th anniversary, the network listed 60 reasons for an apology and recompense from the monarchy.

“We note with great concern your visit to our country, Jamaica, during a period when we are still in the throes of a global pandemic and bracing for the full impact of another global crisis associated with the Russian/Ukraine war,” an open letter from the network read.

“We see no reason to celebrate 70 years of the ascension of your grandmother to the British throne because her leadership, and that of her predecessors, has perpetuated the greatest human rights tragedy in the history of humankind.”

The letter also called on the Queen and the UK government to apologise for crimes against humanity, including but not limited to the “exploitation of the Indigenous people of Jamaica, the trans-Atlantic trafficking of Africans, the enslavement of Africans, indentureship and colonisation”.

A local Creole song, chocolate tasting and lots of dancing

After leaving an air force base in England with an entourage of 15 and a gaggle of UK media, William and Kate changed into their so-called arrival clothes and descended the British government RAF VIP Voyager jet in Belize City as three miniature cannons fired off a salute.

A military band played the national anthems of Belize and Britain, then William inspected a guard of honour as the band played local Creole song Ding Ding Wala.

Kate, who paid tribute to her host country’s flag by wearing a blue lace Jenny Packham skirt suit and a matching clutch, and William, who wore a light-blue suit, were then greeted by the Governor-General of Belize, Froyla Tzalam and her husband Daniel Mendez, People magazine reported.

Putting aside the dispute, the Caribbean nations have had a long association with the British royals, and by all accounts are thrilled when they visit.

They caught up with an excited Prime Minister John Briceno and his wife Rossana at the Laing Building.

He told Reuters he was “delighted to have them … we wish them a fruitful and memorable visit”.

Joseline Ramirez, a manager in the Cayo district of western Belize said: “I believe it’s a wonderful opportunity for them to appreciate the country’s multiculturalism, natural attractions and to enjoy our culinary practices.”

On day two, William and Kate got to taste and make chocolate.

Next stop was Hopkins, a small village on the coast that is considered the cultural centre of the Garifuna community in Belize, where they danced with the locals and played the bongos.

UK royal expert and former press secretary of the Queen, Dickie Arbiter, described the tour as a goodwill visit with hope it will give a temporary lift to the family’s popularity.

He said many people in former colonies see the monarchy as an anachronism that should be let go, adding he expected little would change while the Queen remained on the throne.

“The royal family is pragmatic,” he said, per Reuters. “It knows it can’t look at these countries as realm states forever and a day.”

Carolyn Cooper, a professor emerita at the University of the West Indies, told Reuters the royal couple’s visit was unlikely to discourage Jamaica from opting for republic status.

“I think there is a groundswell of popular opinion against the monarchy,” she said.

Alan Mckoy, a mechanic in Belize City, said earlier this week he “couldn’t care less” about the royal family.

“They are no better than any of us,” he said.

17 Things Humans Do That Dogs Dislike

17 Things Humans Do That Dogs Dislike