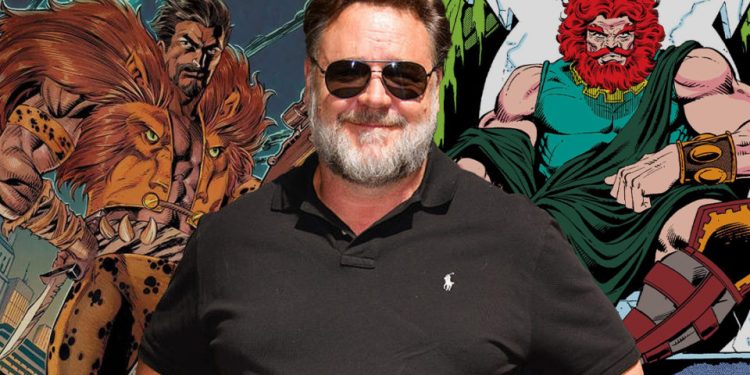 
Oscar winner and much-admired Gladiator Russell Crowe is happiest when he’s filming, at the rugby league or hanging out with family on the New South Wales farm he’s owned for 25 years.

He’s filmed Poker Face during an extended NSW lockdown, flown to Bangkok to shoot The Greatest Beer Run Ever with his mates Chris Hemsworth and Sam Burgess, and even turned into Zeus for a cameo in Taika Waititi’s Thor: Love and Thunder.

Now, the 57-year-old is embracing the superhero format once again (don’t forget he was father to Superman in 2013’s Man of Steel), reportedly set to join Sony’s Marvel movie Kraven the Hunter.

According to Hollywood Reporter, Kraven the Hunter will be Crowe’s “second entrée into Marvel filmmaking” after Disney’s Thor.

Taylor-Johnson has signed a multi-picture deal to play the antihero (not a pretend superhero in a home-made green costume), with the first film expected out early 2023, reports HR.

We know Taylor-Johnson’s role, but Crowe’s is still under lock and key.

“Kraven, who is one of Spider-Man’s best-known nemeses, made his comic debut all the way back in 1964’s The Amazing Spider-Man No.15, with the character created by Spider-Man co-creators Stan Lee and Steve Ditko.

“The Russian big-game hunter decided to target the most dangerous foe he could imagine: Spider-Man,” reports HR.

We first learned of Crowe’s Thor cameo during an extended FM radio interview in April.

Speaking on Australia’s first and only LGBTQI+ community radio station 94.9 Joy Breakfast With The Murphys, Crowe spoke about the death of his elderly father during one of the COVID-19 lockdowns and Boy Erased, the powerful story about gay conversion therapy.

Crowe played a pastor in the 2018 film alongside Joel Edgerton and Nicole Kidman.

Before signing off, he said: “I’m going to get on my bicycle and I’m going to ride up to Disney Fox Studios.

Crowe, who regularly shares snippets of his life and retweets meaningful moments and news stories, hasn’t responded publicly yet about the Kraven news.

In the post-credits scene of Captain America: The Winter Soldier (2014), Taylor-Johnson first appeared as the character Quicksilver, Pietro Maximoff.

He went on to star in Avengers: Age of Ultron (2015), the sequel to 2012’s The Avengers, as part of the Marvel Cinematic Universe.

The role reunited him with Elizabeth Olsen, who played his wife in Godzilla, and in the post-production promotional Avengers tour, he got to hang out with the A-list team of superheroes.

The tips and tutorials would have been gold.

When asked in 2019 whether he would reprise his role as Quicksilver, who sacrificed his life to save Hawkeye, Taylor-Johnson spoke about a future with Marvel.

This time, Taylor-Johnson takes the lead role, and with a multi-film deal, is unlikely to be killed off.

Energy crisis: A third have cut back on heating to dodge bill rises