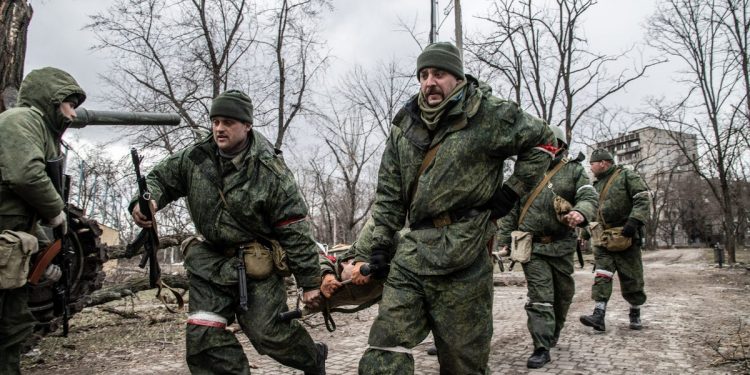 
The head of the breakaway Donetsk People’s Republic in Ukraine has been seen in a video awarding a medal to a fighter for helping to kill “more than 250 nationalists.”

Published on April 3 through the Russia-backed republic’s website, the footage also shows the fighter wearing neo-Nazi symbols on his sleeve.

According to the site, the video shows DPR leader Denis Pushilin saluting and shaking hands with Senior Lieutenant Roman Vorobyov of the “Somalia” motorized rifle battalion during a visit to Mariupol. He then pins the commendation — called the “St George Cross II” by an accompanying report — on Vorobyov.

Two patches can be seen on Vorobyov’s right arm.

One depicts the “Totenkopf,” or “death’s head” — a skull-and-crossbones image recognized as a neo-Nazi and white supremacist symbol by the Anti-Defamation League. It was originally used by a Nazi German SS branch that guarded concentration camps and was later incorporated into the Third SS Panzer Division during World War II.

Vorobyov also wore a patch bearing the “Valknot,” an ancient Norse symbol associated with the god Odin, per the ADL. The Valknot has also been appropriated by white supremacists, the league says.

The video’s accompanying report said that Vorobyov and his battalion had eliminated “45 units of military equipment and more than 250 nationalists” while fighting alongside Russian forces.

A version of the video posted on Pushilin’s official website did not show Vorobyov receiving his medal. It is not immediately clear why that portion of the video was removed.

In justifying the invasion of Ukraine, Russian President Vladimir Putin has claimed that the country is run by “Nazis” and that Russia’s campaign aims to “denazify” the region. Moscow has also recognized the territories of Luhansk and Donetsk — where the DPR is located — as independent republics and said it aims to “liberate” the areas.

While Ukraine has a neo-Nazi presence among some of its fighters, such as the ultranationalist Azov Battalion, experts say Putin’s claims are a mischaracterization of the country and factually wrong. Ukraine’s democratically-elected president, Volodymyr Zelenskyy, is a Jewish man with several family members who perished in the Holocaust.