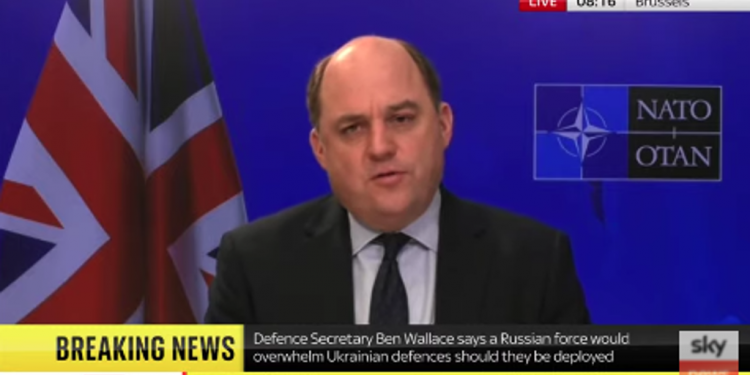 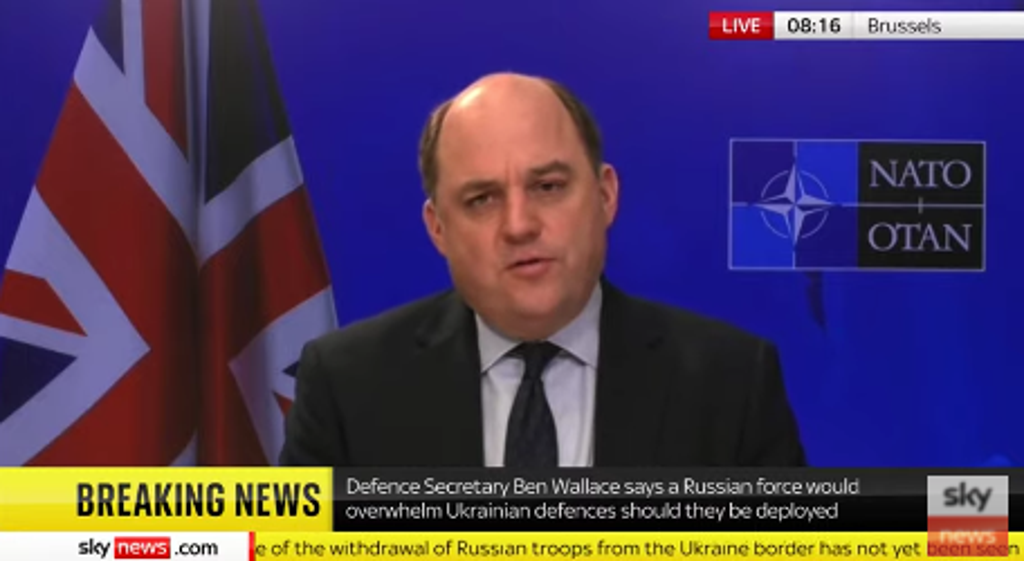 Russia has not taken its “foot off the gas” over a potential invasion and Ukraine and the UK hasn’t “seen evidence” of a withdrawal of forces, Ben Wallace has warned.

Pouring cold water on claims from the Kremlin that some troops were being pulled back from the Eastern European country’s border, the defence secretary claimed forces were “increasing in key areas”.

“I think what we haven’t seen is evidence of withdrawal that has been claimed by the Kremlin,” Mr Wallace told Sky News.

The cabinet minister claimed the government continued to see a “build up” of Russian field hospitals and strategic weapons being deployed to the region, insisting: “Until we see a proper de-escalation, I think we should all be cautious about the direction of travel from the Kremlin”.

With over 130,000 estimated troops massed on the border of Ukraine, Mr Wallace said it represented “60 per cent of the entire Russian land combat power”.

“Also out at sea there’s effectively a significant flotilla of Russian and amphibious landing ships, and indeed war ships and missile ships, and from a Ukrainian point of view they’re fairly surrounded by a very large force of ready troops.

“That continues – they haven’t taken the foot of the gas.”

His remarks come ahead of a meeting of Nato defence ministers in Brussels on Wednesday and after US president, Joe Biden, gave a televised address, in which he said an invasion was still possible and stressed his administration would defend all Nato territory.

However, after reports quoting US intelligence sources that an invasion could commence in the early hours of Wednesday morning were proved incorrect, Mr Wallace insisted it was “unhelpful” to speculate over dates for a possible invasion.

“I’ve never talked about a date because in all the intelligence I’ve seen dates are not the issue. The issue here is the significant amount of forces,” he stressed.

He added: “There’s really not point speculating on a specific date, however there are definitely dates in the mix. I think it’s unhelpful to speculate.”

But speaking on BBC Radio 4’s Today programme, the former head of MI6, Sir John Sawers, said the risk of a “full-blooded” Russian invasion of Ukraine was never as high as some western governments portrayed and has now “receded”.

“I don’t think that president Putin ever decided to invade the country and, indeed, I think it would always have been a very risky course for him to have taken,” he said.

“But I think Russia has also come out of this with a number of important gains,” he added, saying it has got Russia’s security concerns back to the top of the international security agenda, the Ukrainians have been intimidated and Europeans have been reminded how dependent they are on Russian gas.

How Many People Work in the Coal Industry?