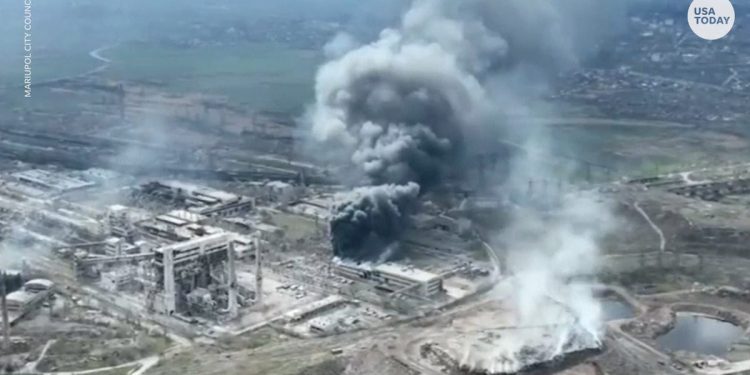 A day after Russian President Vladimir Putin claimed his troops were victorious in the battle for Mariupol, a Russian military official laid out wider aims in the country’s new phase of the war in eastern Ukraine, saying Russia was seeking full control of the Donbas and southern Ukraine.

Rustam Minnekayev, acting commander of Russia’s Central Military District, said the control “will provide a land corridor to Crimea, as well as influence (over) the vital objects of the Ukrainian economy.”

The move also would open the way to Moldova, including its Russian-backed breakaway region of Transnistria, Minnekayev said.

The senior military leader made the comments at a defense industry event, where he acknowledged the second phase of the war started “just two days ago.”

Capturing Mariupol is seen as central to the new phase, but thousands of Ukrainian troops and civilians remain in the giant Azovstal steel mill complex. Putin ordered his troops Thursday not to storm the stronghold but to seal it off “so that not even a fly comes through.”

Ukraine’s Deputy Prime Minister Iryna Vereshchuk on Friday called for Russia to open up humanitarian corridors for civilians in the plant to evacuate.

NEW PHASE OF WAR: What a new phase of war means for Ukrainians in the east

►United Nations Secretary-General António Guterres will travel to Moscow and meet with Russian President Vladimir Putin on Monday, his office said in a statement Friday.

►Satellite images showed what appeared to be mass graves near Mariupol, and the city’s mayor said Russian troops have buried as many as 9,000 civilians killed in the conflict in a nearby mass grave in order to cover up “military crimes.”

►The U.N.’s human rights office said Friday its investigators had documented at least 50 civilian deaths, including by summary execution, in the Kyiv suburb of Bucha.

►The International Atomic Energy Agency Director-General Rafael Mariano Grossi will travel to Ukraine next week to visit the Chernobyl nuclear power plant, the agency said Friday. Russian forces seized control of the site early in their invasion but have since left, with Ukrainian control of its operations in place.

►In his nightly address Thursday, Ukrainian President Volodymyr Zelenskyy said Russia had rejected a proposal for a truce during the Orthodox Easter holiday.

►U.S. Secretary of Defense Lloyd J. Austin III will travel to Germany next week to meet with a handful of nations to discuss the current and future defense needs of Ukraine, Pentagon Press Secretary John F. Kirby said.

Ukrainian Defense Ministry Spokesman Oleksandr Motuzianyk gave an update on the fighting Friday, saying Russian troops were most active toward Izyum and Barvinkove, around Popasna and Severodonetsk and between the Zaporizhzhia-Donetsk highway.

“We still assess that Mariupol is contested, that it hasn’t been taken by the Russians and that there’s still an active Ukrainian resistance. So they continue to fight for that city,” Kirby told CNN on Friday.

Petro Andryushchenko, an adviser to Mariupol’s mayor, told the Associated Press on Friday that “fighting, shelling, bombing” were ongoing.

Russia has ceaselessly bombarded the city for almost two months and appears to control most of the city. But a few thousand Ukrainian troops, by Moscow’s estimate, have stubbornly held out for weeks at the steel plant. Ukrainian officials also said about 1,000 civilians are also trapped there.

U.S. President Joe Biden pushed back on Putin’s claims that Mariupol had fallen to Russia. “It’s questionable whether he does control Mariupol,” Biden said. “There’s no evidence yet that Mariupol has completely fallen.”

The head of the United Nation’s human rights office on Friday said international humanitarian law appears to have been “tossed aside” during Russia’s invasion of Ukraine.

“Russian armed forces have indiscriminately shelled and bombed populated areas, killing civilians and wrecking hospitals, schools and other civilian infrastructure — actions that may amount to war crimes,” the U.N. human rights office said in a statement.

The office said it has verified at least 2,345 civilian deaths and 2,919 injuries since the invasion began Feb. 24. More than 92% of those were recorded in Ukrainian government-controlled territory, it added.

“Over these eight weeks, international humanitarian law has not merely been ignored but seemingly tossed aside,” said U.N. High Commissioner for Human Rights Michelle Bachelet.

Also included are 121 Phoenix Ghost drones developed by the U.S. Air Force specifically for the Ukrainians, Kirby said. The drones have abilities to the Switchblade kamikaze drones, which are single-use, armed drones that fit in a backpack. They are designed with cameras, guidance systems and abort systems.

Biden said not all the U.S. assistance is being advertised. “Sometimes we will speak softly and carry a large Javelin, because we’re sending a lot of those in as well,” Biden said, taking about surface-to-air Javelin missiles and playing off a famous line from President Theodore Roosevelt.

Ukrainian President Volodymyr Zelenskyy thanked the United States for the new package, which he said was “just what we were waiting for.”

A Russian state media reported Thursday that Russian security forces have received full information about all of Ukraine’s Secret Service Staff in the Kherson region.

The state-run media outlet listed the names, photos, and birth years of who it said were 14 employees of the Ukrainian Secret Service in the Kherson region, which is currently under Russian control.

The Russian-controlled news source said the Ukrainian service members aimed to “sabotage in the territories liberated by the Russian army.”

Many media outlets in Russia are state-controlled: any journalists or citizens who publish information running counter to Putin’s narrative of the war face up to 15 years in prison under Russian law.