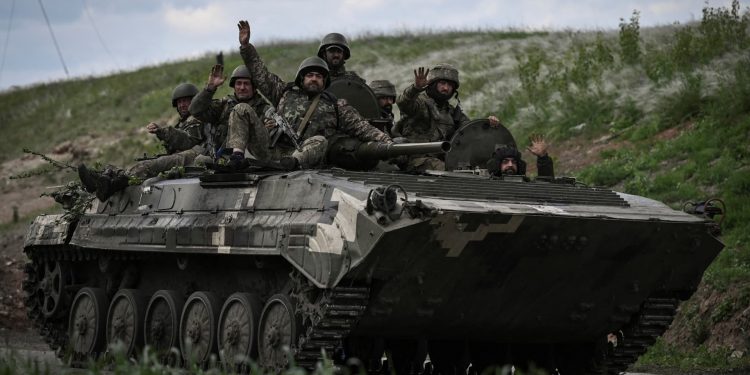 Putin is now getting ‘more NATO’ because of his invasion, alliance chief says

NATO Secretary-General Jens Stoltenberg attends a ceremony to mark Sweden’s and Finland’s application for membership in Brussels, Belgium, May 18, 2022.

“He wanted less NATO on his borders, now he’s getting more NATO,” Stoltenberg said in a special address to the World Economic Forum in Davos, Switzerland.

Stoltenberg’s comments come as relations between Russia and the Western military alliance NATO remain tense after Finland and Sweden announced applications to join the organization.

Although the application process takes time for all existing NATO members to approve, and Turkey’s objections have not yet been overcome, the expected expansion of NATO has irked Russia with President Putin calling it “a problem,” although his foreign minister has tried to downplay the significance of the enlargement.

UK looking at how to get grain out of Ukraine, warning of ‘hunger and famine’ if not

Ears of wheat are seen in a field near the village of Zhovtneve, Ukraine.

The U.K. is holding talks with Ukraine over how to get its grain out of the country, a British government minister said Tuesday.

Russia has blocked Ukraine’s main sea ports, blocking exports of grain from the country — which is seen as one of the world’s “bread baskets” as a massive exporter of agricultural products, from wheat to sunflower oil — and pushing up global food prices in the process.

U.K. Transport Minister Grant Shapps told Sky News that he was very concerned about the issue, saying more lives could be lost as a result of hunger.

“What really worries me is we’ve seen many lives lost in Ukraine and we could see even more lives lost in other places in the world through grain and food shortages which could be even greater than the lives lost in the war directly,” he said.

Shapps said he’d met Ukrainian Infrastructure Minister Oleksander Kubrakov last week to discuss how to move grain out of the country, following reports that the U.K. and other willing allies could put in place a military escort to ensure ships carrying goods out of the port of Odesa were kept safe.

“We were discussing details which I can’t go into but about how infrastructure could be in place to ensure the grain leaves,” Shapps said Tuesday. “We’re looking at all the different options … there are lots of different potential ways to get grain and other goods out of the country,” he said.

Shapps warned “there could be a lot of hunger and famine” if Ukraine’s agricultural produce could not be exported.

Russia’s Foreign Minister Sergey Lavrov has said that Moscow would “seriously consider” whether it needs to re-establish relations with the West.

Speaking in a question and answer session at an event in Moscow Monday evening, Lavrov said
Western countries had espoused “Russophobia” since the Kremlin had launched what it calls a “special military operation” in Ukraine on Feb.24. The West considers it an aggressive, unprovoked invasion.

“If they want to offer something in terms of resuming relations, then we will seriously consider whether we will need it or not,” he said, adding that Russia was developing its own system of import substitutions given the international sanctions on the country.

Russia should not be in any way “dependent on the supply of anything from the West to ensure the development of critical industries for the security, economy and social sphere of our motherland,” Lavrov added.

His comments, which were posted on the foreign ministry’s website, also signalled that Russia’s pivot toward China would continue.

“Now that the West is in a dictatorial position, our economic ties with China will grow even faster,” Lavrov said, adding that this also poses an opportunity to develop Russia’s far east and eastern Siberia.

Russia has increased the intensity of its operations in the Donbas as it seeks to encircle Severodonetsk, Lysychansk, and Rubizhne, the U.K.’s Ministry of Defence said in its latest intelligence update Tuesday.

“At present the northern and southern axes of this operation are separated by approximately 25 km of Ukrainian-held territory,” the ministry noted.

While there has been strong Ukrainian resistance with forces occupying well dug-in defensive positions, Russia has, however, achieved some localized successes, due in part to concentrating artillery units, the U.K. noted.

Capturing what the British military called the “Severodonetsk pocket” (area) matters a lot to Russia, because “it would see the whole of Luhansk Oblast placed under Russian occupation.”

Nonetheless, while currently Russia’s main effort, this operation is only one part of Russia’s campaign to seize the Donbas.

Russia has fired on 38 towns in Donetsk and Luhansk, Ukraine says

Ukraine has said that Russian forces have struck multiple towns in the Donbas region of eastern Ukraine, including civilian infrastructure.

“The occupiers fired on 38 towns in Donetsk and Luhansk oblasts,” Ukraine’s Joint Forces Task Force said in a Facebook post Tuesday, “destroying and damaging 62 civilian objects, including 53 houses, an agricultural enterprise, a kindergarten, a bank branch, a pharmacy and the national police administration building.”

As a result of these shellings, at least seven civilians were killed and six others were injured, the update noted. CNBC was unable to verify the information.

Russian forces have been intensifying their assaults in the Donbas region in recent weeks, with fierce fighting seen around the city of Severodonetsk which is located between Donetsk and Luhansk, currently the most contested areas in the Ukraine war.

A picture taken on May 22, 2022, shows the destroyed bridge connecting the city of Lysychansk with the city of Severodonetsk in the eastern Ukranian region of Donbas, amid Russian invasion of Ukraine.

In a separate Facebook post, the General Staff of the Armed Forces of Ukraine said Russian forces are “exerting intense fire along the entire line of contact and in the depths of the defense of our troops in the Donetsk, Slobozhansky and Pivdennobuzhsky operational areas.”

“The greatest activity of hostilities” is observed in the Donetsk operational district, the post noted, namely near Lysychansk and Severodonetsk.

A man holds up Russian ruble and Ukrainian hryvnia notes on 18 March 2014.

Saldo also said an office of a Russian bank will open in the region, the AP reported.

Kherson was the first city to fall fully under Russian control. A Russian official previously spoke of plans to request Russian President Vladimir Putin to annex the region and have it join the Russian Federation.

“We can in no way ignore the fact that Sweden is imposing sanctions against us,” Erdogan said, according to the AP. “Turkey’s rightful expectations concerning (an end to the) support to terrorism and sanctions must be met.”

Turkey has said it opposes Sweden’s application to join NATO, saying the country supports the Kurdistan Workers’ Party, or the PKK – a Kurdish Marxist separatist movement that has been fighting Turkish forces on-and-off since the 1980s.

The PKK is classified as a terrorist organization by Turkey, as well as by the U.S., Canada, Australia and the European Union.

The head of the U.N.’s World Food Program is telling billionaires it’s “time to step up” as the global threat of food insecurity rises with Russia’s war in Ukraine, saying he’s seen encouraging signs from some of the world’s richest people, like Elon Musk and Jeff Bezos.

Agency Executive Director David Beasley built upon a social media back-and-forth he had with Musk last year, when the Tesla CEO challenged policy advocates to show how a $6 billion donation sought by the U.N. agency could solve world hunger.

Since then, “Musk put $6 billion into a foundation. But everybody thought it came to us, but we ain’t gotten any of it yet. So I’m hopeful,” Beasley told The Associated Press at the World Economic Forum in Davos, Switzerland, where some of the world’s biggest elites and billionaires have gathered.

“I don’t know what it’s going to take,” he said of Musk. “We’re trying every angle, you know: Elon, we need your help, brother.”

Musk and Bezos didn’t immediately respond to emails or other messages seeking comment.

Habeck warned, however, that an embargo would not automatically weaken the Kremlin as rising prices were enabling it to rake in more income while selling lower volumes of oil.

Therefore, one consideration was to no longer pay “any price” for oil, but to agree on upper limits, he said. For that to work, however, many countries would have to get on board.

‘Never have I been so ashamed of my country’: Russian diplomat quits over Ukraine invasion

Russian service members work on demining the territory of Azovstal steel plant during Ukraine-Russia conflict in the southern port city of Mariupol, Ukraine May 22, 2022.

“Never have I been so ashamed of my country as on Feb. 24 of this year,” wrote Boris Bondarev, a counselor in Russia’s mission to the United Nations in Geneva, in an email to other diplomats there.

“Those who conceived this war want only one thing — to remain in power forever, live in pompous tasteless palaces, sail on yachts comparable in tonnage and cost to the entire Russian navy, enjoying unlimited power and complete impunity,” wrote Bondarev.

Bondarev wrote that during his 20 years in Russia’s Foreign Ministry, “the level of lies and unprofessionalism” has increased, but in recent years “has become simply catastrophic.”

“Today, the Ministry of Foreign Affairs is not about diplomacy. It is all about warmongering, lies and hatred.”