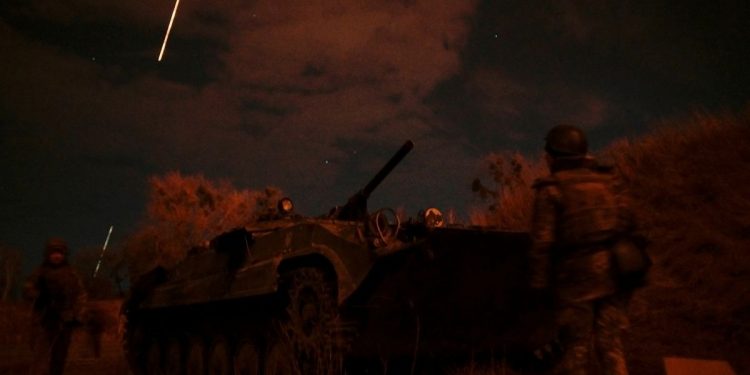 KYIV/MOSCOW, Feb 27 (Reuters) – President Vladimir Putin put Russia’s nuclear deterrent on high alert on Sunday in the face of a barrage of Western reprisals for his war on Ukraine, which said it had repelled Russian ground forces attacking its biggest cities.

The United States said Putin was escalating the war in a “totally unacceptable” way, amid signs that the biggest assault on a European state since World War Two was not producing rapid battlefield victories, but instead generating a far-reaching and concerted Western response.

The Ukrainian president’s office said negotiations with Moscow without preconditions would be held at the Belarusian-Ukrainian border.

“I do not really believe in the outcome of this meeting, but let them try, so that later not a single citizen of Ukraine has any doubt that I, as president, tried to stop the war,” President Volodymyr Zelenskiy said.

The Kremlin said talks had started.

As missiles fell on Ukrainian cities, nearly 400,000 Ukrainian civilians, mainly women and children, have fled into neighbouring countries. Hundreds were stranded in Kyiv on Sunday waiting for trains to take them west, away from the fighting.

The capital remained in Ukrainian government hands, with Zelenskiy rallying his people daily despite Russian shelling of civilian infrastructure.

The World Health Organization said medical oxygen was running low. But a doctor said a blood bank where donors had come under fire on Saturday was again packed.

Only three days after it started, the invasion has triggered a Western political, strategic, economic and corporate response unprecedented in its extent and coordination.

The 27-nation European Union decided for the first time in its history to supply weapons to a country at war, and a source told Reuters it would send 450 million euros ($507 million) of weaponry to its eastern neighbour.

It also shut all Russian planes out of its airspace, as did Canada, and banned the Russian media outlets RT and Sputnik. read more

Germany, which had already frozen a planned undersea gas pipeline from Russia, said it would increase defence spending massively, casting off decades of reluctance to match its economic power with military clout.

British oil major BP announced it would give up its 19.75% stake in Russian oil giant Rosneft (ROSN.MM), writing off up to $25 billion. read more

World Bank President David Malpass said the Group of Seven economies would discuss Ukraine on Tuesday, and that the bank may be able to provide Ukraine with financial aid in days. read more

‘NOT DETERRENCE BUT THREAT’

But Putin, who has called the invasion a “special operation”, thrust an alarming new element into play when he ordered Russia’s “deterrence forces” – which wield nuclear weapons – onto high alert.

He cited aggressive statements by NATO leaders and the raft of economic sanctions imposed on Russia by the West.

“Not only do Western countries take unfriendly measures against our country in the economic dimension – I mean the illegal sanctions that everyone knows about very well – but also the top officials of leading NATO countries allow themselves to make aggressive statements with regards to our country,” Putin said on state television.

He previously referred to his nuclear arsenal in a speech announcing the start of the invasion on Thursday, saying Russia’s response to any country that stood in its way would be immediate and carry “consequences that you have never encountered in your history”.

“This is not ‘deterrence’ on Putin’s part – this is a threat,” said Patricia Lewis, director of the Chatham House think-tank’s international security programme.

Ukrainian Foreign Minister Dmytro Kuleba said it was an attempt to pressure Kyiv during the talks, but that Ukraine would not be cowed.

U.S. Ambassador to the United Nations Linda Thomas-Greenfield told CBS: “President Putin is continuing to escalate this war in a manner that is totally unacceptable, and we have to continue to stem his actions in the strongest possible way.”

A U.S. defence official said Washington was trying to assess what Putin’s announcement meant in tangible terms, but that it increased the danger from any miscalculation. read more

In the strongest economic sanctions yet, the United States and Europe said on Saturday they would banish big Russian banks from the main global payments system SWIFT and announced other measures to limit Moscow’s use of a $630 billion war chest.

Rolling protests have been held around the world against the invasion, including in Russia, which has clamped down hard, detaining an additional 2,000 protesters on Sunday in 48 cities, bringing total arrests there to more than 4,000. read more

Tens of thousands of people across Europe marched in protest against Russia’s invasion on Saturday, including more than 100,000 in Berlin. read more

A Ukrainian state news agency said that, before daybreak, Russian troops blew up a natural gas pipeline in Kharkiv, Ukraine’s second largest city, sending a burning cloud up into the darkness.

Soon after, Russian soldiers and armoured vehicles rolled into Kharkiv, in northwest Ukraine, and witnesses reported firing and explosions. But city authorities said the attack had been repelled.

“Control over Kharkiv is completely ours! The armed forces, the police, and the defence forces are working, and the city is being completely cleansed of the enemy,” regional governor Oleh Sinegubov said.

Reuters was unable to corroborate the information.

“We have withstood and are successfully repelling enemy attacks. The fighting goes on,” Zelenskiy said in the latest of several video messages from the streets of Kyiv. read more

He has declined to leave the city and has been marshalling combatants and civilians, many of whom have sought shelter in underground railway stations.

At least 198 Ukrainians, including three children, have been killed in the invasion, Ukraine’s Health Ministry said.

A United Nations agency reported 64 civilian deaths and a Ukrainian presidential adviser said 3,500 Russian soldiers had been killed or wounded. Reuters was not able to verify the numbers.

The Russian Defence Ministry acknowledged that Russian soldiers had been killed and wounded, but said its losses were far lower than those suffered by Ukraine, the Interfax news agency reported. It said Russian attacks had hit 1,067 Ukrainian military sites.

Putin has said he must eliminate what he calls a serious threat to his country from its smaller neighbour, accusing it of genocide against Russian-speakers in eastern Ukraine – something Kyiv and its Western allies reject as a lie.

Ukraine, a democratic nation of 44 million people, won independence from Moscow in 1991 at the fall of the Soviet Union and has pushed to join the NATO Western military alliance and the EU, goals Russia vehemently opposes.

Germany, which is sending anti-tank weapons, surface-to-air missiles and ammunition to Ukraine, said on Sunday said it would boost defence spending to more than 2% of its economic output in response to the attack, ending its post-World War Two practice.

“There could be no other answer to Putin’s aggression,” Chancellor Olaf Scholz told lawmakers.

Trump news – live: Ex-AG launches attack on Trump in new book as he blames Biden for war in Europe – The Independent