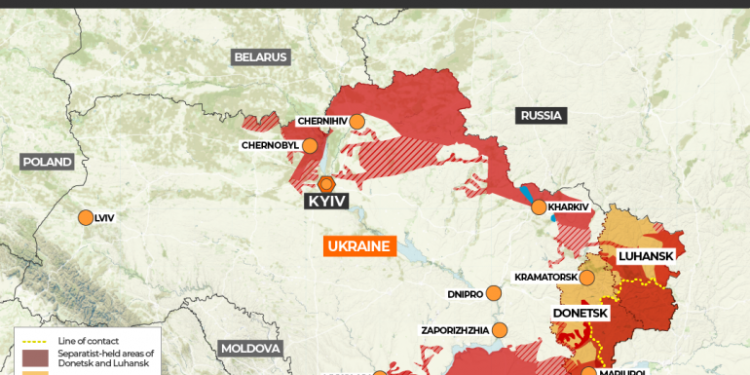 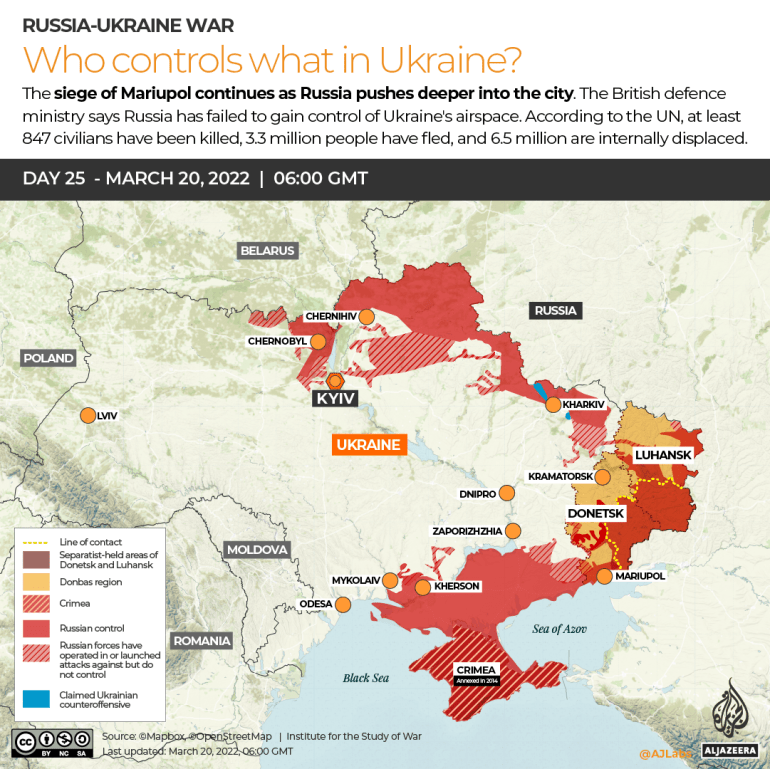 A Ukrainian official is raising the alarm over an ammonia leak at a chemicals plant in the northeastern Ukrainian city of Sumy besieged by Russian troops.

Dmytro Zhyvytskyy, Sumy regional governor, said the leak was reported at 04:30 local time (02:30 GMT) at the Sumykhimprom plant and that the area within a five-kilometre radius around the plant was hazardous.

He did not say what had caused the leak.

US President Joseph Biden has added a stop in Poland to his upcoming trip to Europe for urgent talks with NATO, G7 leaders and European allies.

Biden, who leaves Washington on Wednesday, will first travel to Brussels and then Warsaw, where he will hold a bilateral meeting with President Andrzej Duda, his spokeswoman said.

In the Polish capital on Friday, Biden will discuss the international response to “the humanitarian and human rights crisis that Russia’s unjustified and unprovoked war on Ukraine has created”, she added.

Ukrainian media have said at least two people were killed in Chernihiv on Sunday when an artillery shell hit their car.

News website Ukrainska Pravda cited a witness as saying that the two men were out delivering water to the city’s residents.

A Ukrainian official in Odesa says Russia has started “utilising unmanned aerial vehicles in urban areas of the region”.

But Maksym Marchenko, head of the Odesa Military Administration, noted that the “current situation in the region is quiet”.

Zelenskyy says Jerusalem ‘would be right place to find peace’

Ukraine’s president says Israel is undertaking many efforts to arrange top-level talks between his country and Russia and suggests they might take place in Jerusalem.

“The prime minister of Israel, Mr Bennett is trying to find a way of holding talks. And we are grateful for this. We are grateful for his efforts, so that sooner or later we will begin to have talks with Russia, possibly in Jerusalem,” Zelenskyy said during his nightly video address.

“That’s the right place to find peace. If possible.”

China will keep up ‘normal cooperation’ with Russia: Envoy

China’s ambassador to the US has defended his country’s refusal to condemn Russia’s invasion of Ukraine, contending such a rebuke will do nothing to stop the violence.

Qin Gang told the CBS television network’s “Face the Nation” on Sunday that China’s condemnation would not help and that he is doubtful it would have any effect on Russia.

He said China wants “friendly, good neighborly relations with Russia” and will keep up “normal trade, economic, financial, energy cooperation with Russia” as it continues “to promote peace talks” and urge an immediate ceasefire from Russia through negotiation and diplomacy.

Why can’t you condemn this as an invasion?” @margbrennan asks China’s Ambassador to the U.S., Qin Gang of Russia’s Ukraine invasion.

Qin said China is not providing any military assistance to Russia. He insisted that China remains “against a war” and “will do everything” – short of condemnation – “to deescalate the crisis”.

Iryna Vereshchuk, Ukraine’s deputy prime minister, has rejected a Russian call for Ukrainian forces in the besieged city of Mariupol to lay down their arms, saying “there can be no question of any surrender”.

In comments to Ukrainska Pravda, Vereshchuk said the Russian forces were demanding a surrender before allowing the evacuation of civilians.

She described the demand as “real hostage-taking”.

At least one person was killed in the shelling of residential houses and a shopping area in Kyiv’s Podil district, according to Mayor Vitali Klitschko.

He said rescue teams were putting out a large fire at the shopping centre.

Several explosions in Kyiv, Podilsk district According to preliminary information, it affected some residential buildings and the territory of one of the shopping centers. At least one person died— Kyiv City State Administration. pic.twitter.com/LK188YaGSl

Inside Story: Can talks end the war in Ukraine?

Representatives from Ukraine and Russia have met several times since Moscow’s invasion.

There are three main points of contention: a ceasefire, an end to all hostilities and humanitarian corridors. But there has been no progress so far.

So, do these talks serve any purpose?

The United Kingdom’s Defence Ministry said that Russian forces advancing from Crimea are still attempting to circumvent Mykolaiv as they look to drive west towards Odesa, adding that these forces have made little progress over the past week.

“The blockade of the Ukrainian coast is likely to exacerbate the humanitarian situation in Ukraine, preventing vital supplies reaching the Ukrainian population,” the ministry said in a Twitter post.

Find out more about the UK government’s response: https://t.co/4Kgqgh6q8K

“Several explosions in the capital’s Podil district,” Klitschko said on his Telegram channel.

“According to the information we have at the moment, several homes and one of the shopping centres [were hit]. Rescue teams, medics and the police are already on site.”

IAEA calls for more Chernobyl staff to be rotated soon

About half of the staff who have been working at the radioactive waste facilities at Chernobyl since Russian forces seized it last month have been relieved by other Ukrainian staff, the UN nuclear watchdog said.

“They were there for far too long. I sincerely hope that remaining staff from this shift can also rotate soon,” International Atomic Energy Agency (IAEA) chief Rafael Grossi said in a statement. Ukraine’s nuclear regulator informed the IAEA that the rotation had begun on Sunday morning, the agency said.

Russia says Ukraine has until 5am Moscow time (02:00 GMT) on Monday to respond to an offer on humanitarian corridors and laying down arms in the eastern port city of Mariupol.

“Lay down your arms,” Colonel-General Mikhail Mizintsev, the director of the Russian National Centre for Defence Management, said in a briefing distributed by the defence ministry.

“A terrible humanitarian catastrophe has developed,” Mizintsev said. “All who lay down their arms are guaranteed safe passage out of Mariupol.”

Mariupol has suffered some of the heaviest bombardments since Russia invaded Ukraine on February 24. Many of its 400,000 residents remain trapped in the city with little if any food, water and power.

Mizintsev said humanitarian corridors for civilians would be opened eastwards and westwards out of Mariupol at 10am Moscow time (07:00 GMT) on Monday.

A total of 7,295 people were evacuated from Ukrainian cities through humanitarian corridors on Sunday, Ukraine’s Deputy Prime Minister Iryna Vereshchuk said, with four out of seven planned routes working.

Of the total, 3,985 people were evacuated from the besieged city of Mariupol to Zaporizhzhia city. The Ukrainian government planned to send nearly 50 buses to Mariupol on Monday for further evacuations, Vereshchuk said.

Management of the Chernobyl nuclear power plant, site of the world’s worst nuclear accident in 1986, has said that 50 staff members who had been on the job since the plant was seized by Russian forces on February 24 have been rotated out and replaced.

Officials had repeatedly expressed alarm that the staff was suffering exhaustion after weeks of forced, unrelieved work and that this endangered the decommissioned plant’s safety.

The authority that manages the plant did not give specifics on how an agreement was reached to let the workers leave, and others come in to replace them.

A convoy of vehicles carrying residents evacuated from the Ukrainian village of Bobryk has arrived in Brovary, a city east of the capital Kyiv.

The convoy included 20 buses and 250 cars, carrying about 1,600 people in total, including 843 children, officials said.

One Bobryk resident, Ihor Lytvyn, told The Associated Press news agency he was shot in the hand and his grandmother was shot in the leg when a Russian convoy drove through the village. Another resident, Serhiy Gyziy, stayed for a week in a shelter without water and electricity.

About 10 million people have fled their homes – more than 6 million of them have been displaced internally, and more than 3.3 million have fled Ukraine, the UNHCR said on Sunday.

The plea by Japan’s foreign minister Yoshimasa Hayashi came during meetings with Emirati officials, which coincided with a visit by Germany’s economy minister, three weeks into the Russian offensive.

Hayashi asked “the UAE to contribute to the stabilisation of the international oil market by supplying a greater amount of oil, securing spare productive capacity as a leading member of OPEC+”, a Japanese foreign ministry spokesperson told an online briefing.

Negotiation the only way to end the war, Zelenskyy says

Ukrainian President Volodymyr Zelenskyy has renewed his plea for talks with his Russian counterpart, taking to US television to say negotiations were the only way to “end this war”.

He stressed that he and President Vladimir Putin were the only principals able to thrash out a deal to stop the fighting, now in its fourth week.

But he signalled he would lay down red lines against ceding Ukrainian territory, including two pro-Moscow breakaway regions.

“I’m ready for negotiations with him,” Zelenskyy told CNN show Fareed Zakaria GPS through a translator. “I think without negotiations we cannot end this war.”

Click here to read all the updates from March 20.