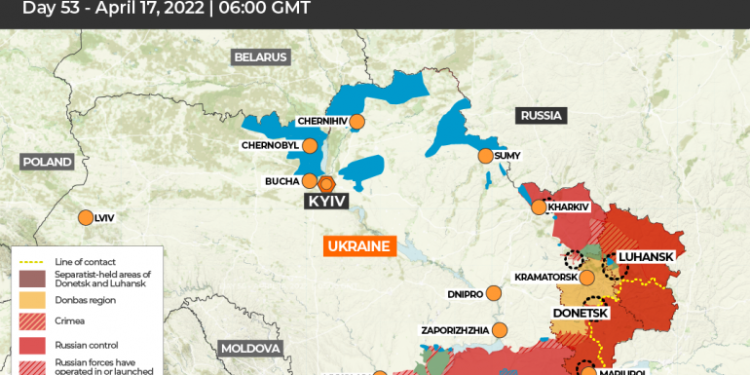 President Zelenskyy says Ukraine will offer tough resistance ahead of an expected Russian assault in the east. 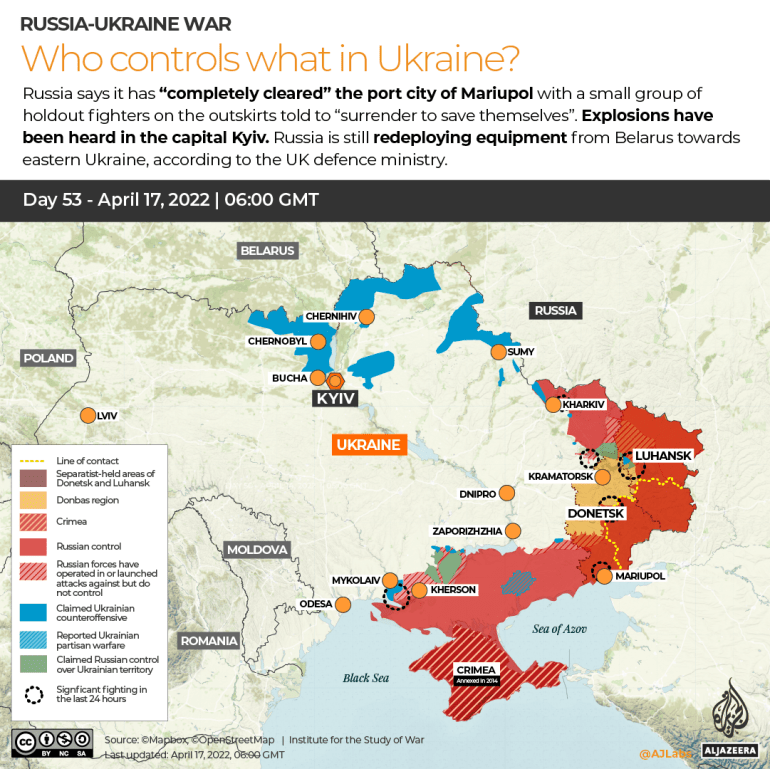 Mariupol fighters continue to hold out

Ukrainian Prime Minister Denys Shmyhal has said the remaining Ukrainian forces in the port city of Mariupol were still fighting and continued to defy the Russian demand that they surrender.

“The city still has not fallen,” Shmyhal told ABC’s This Week programme.

The UN refugee agency has said 4,869,019 million Ukrainians have left the country since Russia invaded on February 24 – up 32,574 on Saturday’s total.

“As Christians celebrate resurrection on this sombre Easter Sunday, we must stubbornly hope that in the days, months and years to come the methods and language of war will not prevail over those – more difficult, more complicated – that lead to peace,” said UNHCR chief Filippo Grandi.

The UN’s International Organization for Migration (IOM) has said an addditional 215,000 third-country nationals have also escaped to neighbouring countries since the war began.

Eighteen people have been killed and more than 100 wounded in Russian shelling in the past four days in the northeast Ukrainian city of Kharkiv, Ukraine’s president has said.

On Sunday, five people were killed and 20 were injured when a missile and artillery fire hit the city centre and the Saltivka suburb, regional governor Oleh Synyehubov said earlier.

Al Jazeera was unable to confirm the death toll.

Zelenskyy said in his nightly address that Russia’s shelling of Kharkiv has been constant.

Zelenskyy has said he spoke with IMF Managing Director Kristalina Georgieva about Ukraine’s financial stability and the country’s post-war reconstruction.

“Discussed with IMF Managing Director Georgieva the issue of ensuring Ukraine’s financial stability & preparations for post-war reconstruction. We have clear plans for now, as well as a vision of prospects. I’m sure cooperation between the IMF & Ukraine will continue to be fruitful,” he wrote in a tweet.

Discussed with IMF Managing Director @KGeorgieva the issue of ensuring Ukraine’s financial stability & preparations for post-war reconstruction. We have clear plans for now, as well as a vision of prospects. I’m sure cooperation between the IMF & 🇺🇦 will continue to be fruitful.

Georgieva later confirmed the call in a post on Twitter. She wrote support is “essential to lay the foundations for rebuilding a modern competitive #Ukraine”.

Ukrainian President Volodymyr Zelenskyy has said Ukraine is not willing to give up territory in the eastern part of the country to end the war with Russia and is preparing to offer tough resistance in the face of an expected large-scale offensive there.

Welcome to Al Jazeera’s continuing coverage of the war in Ukraine. Read all the updates from April 17 here.