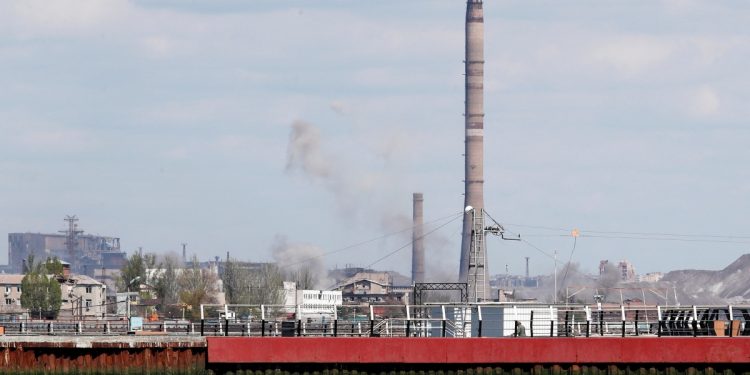 Doznes of people have been evacuated from a steel plant in the pulverised city of Mariupol, including women and children.

Two groups of civilians left the residential area around the Azovstal steelworks – the last Ukrainian stronghold in the bombed-out ruins of the southern Ukrainian city – on Saturday, Russian news agencies cited the defence ministry as saying on Sunday.

The ministry said a total of 46 civilians left the area and were “provided with food and shelter”, RIA and TASS reported. Those brought out included 19 adults and six children. No further details were given.

Many efforts to arrange a ceasefire to allow residents to leave the city have broken down, with Moscow and Kyiv repeatedly blaming each other.

A leader with the Azov Battalion, the Ukrainian unit defending the plant, said 20 civilians were evacuated during a ceasefire, though it was not clear if he was referring to the same group as the Russian news reports.

“Twenty civilians, women and children … have been transferred to a suitable place and we hope that they will be evacuated to Zaporizhzhia, on territory controlled by Ukraine,” Sviatoslav Palamar said in a video posted on the battalion’s Telegram channel.

He reported heavy bombardment of the site overnight and said fighters were still going through the debris searching for civilians to rescue.

“All night, the enemy artillery bombarded the site,” he said. “The Azov regiment is still clearing the rubble to get civilians out. We hope this procedure will continue that we will manage to evacuate all the civilians.”

There was no confirmation from the United Nations on the evacuations. The world body has been trying to broker a civilian evacuation from the plant, the only part of Mariupol that remains in the hands of Ukrainian troops.

An estimated 1,000 civilians and several hundred Ukrainian soldiers are thought to be sheltering in the maze of underground tunnels underneath the steelworks. Many of them require medical attention.

Call for evacuation of fighters

Video and images from inside the plant, shared with The Associated Press by two Ukrainian women who said their husbands were among the fighters refusing to surrender there, showed unidentified men with stained bandages; others had open wounds or amputated limbs.

A skeleton medical staff was treating at least 600 wounded people, said the women, who identified their husbands as members of the Azov Regiment. Some of the wounds were rotting with gangrene, they said.

In the video, the men say they eat just once daily and share as little as 1.5 litres (50 ounces) of water a day among four people, and that supplies inside the besieged facility are depleted.

One shirtless man appears to be in pain as he describes his wounds: two broken ribs, a punctured lung, and a dislocated arm that “was hanging on the flesh”.

“I want to tell everyone who sees this: If you will not stop this here, in Ukraine, it will go further to Europe,” he said.

The women told the AP the video was taken last week in the maze of corridors and bunkers beneath the plant. They urged that Ukrainian fighters also be evacuated alongside civilians, warning they could be tortured and executed if captured.

“The lives of soldiers matter too,” Yuliia Fedusiuk said from Rome, Italy.

Saviano Abreu, spokesman for the UN humanitarian office, said the world organisation was negotiating with authorities in Moscow and Kyiv, but he could not provide details of the ongoing evacuation effort “because of the complexity and fluidity of the operation”.

“There is, right now, ongoing, high-level engagements with all the governments, Russia and Ukraine, to make sure that you can save civilians and support the evacuation of civilians from the plant,” Abreu said.

The latest satellite images from the United States-based Maxar Technologies, taken on Friday, show nearly all the buildings at the steelworks have been destroyed.

Some roofs have been holed or complete caved in, some buildings reduced to rubble.