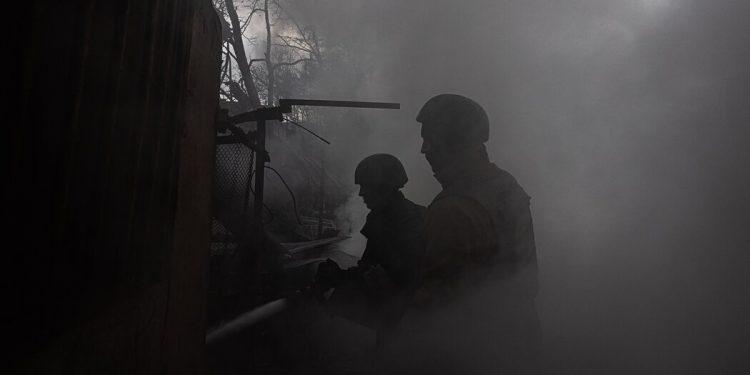 The flagship of Russia’s Black Sea Fleet suffered catastrophic damage on Thursday that a senior Ukrainian official said was the result of a missile strike by Ukrainian coastal defense forces, though Russia claimed that the damage was caused by an onboard fire.

The crew of the Russian guided-missile cruiser, the Moskva, abandoned ship after a fire detonated ammunition aboard, Russia’s defense ministry said. It said in a statement that the fire aboard the cruiser had been contained, but the Ukrainians said the ship had sunk.

The governor of the Odesa region along the Black Sea, Maxim Marchenko, said on Telegram that the country’s forces had struck the ship with anti-ship Neptune missiles. The senior Ukrainian official, speaking on the condition of anonymity to describe an active military engagement, said that it was the first time the Ukrainian-developed Neptune missile had been used in the war.

There was no independent visual confirmation of the vessel’s status, and the statement about the Neptune could not be independently verified.

Whatever the cause of the ship’s possible demise, it was a potent symbolic victory for the Ukrainian military, an embarrassment for Moscow and — if a Neptune was used — a demonstration of the power that new weapons could have in shaping the war. It would be the first successful Ukrainian attack on a major Russian warship at sea rather than at port.

Ships from Russia’s Black Sea Fleet have been offshore since the start of the war, periodically launching rocket or missile attacks against targets inside Ukraine. The fleet has cut off Ukraine’s access to the Black Sea, removing a key economic lifeline.

The potential loss of the Moskva provides a morale boost to Ukrainian forces, but it is unlikely to change the course of the war. Russian forces are on the verge of taking the strategic port city of Mariupol, which would pave the way for the creation of a “land bridge” between Russian territory and the occupied Crimean Peninsula.

The Moskva, with a crew of almost 700, is the pride of the Russian naval fleet in the Black Sea. It was originally built in the Soviet era in the Ukrainian port of Mykolaiv — the city where Ukrainian forces last month mounted a spirited defense that stopped the Russian advance toward Odesa.

The Ukrainians have long had the ability to strike Russian ships parked near their territorial waters, but the Neptune gives the nation’s territorial defense forces far greater range. The missile, which is based on the Soviet AS-20 “Kayak” anti-ship missile and is similar to the U.S.-built Harpoon missile, can reach targets as far as 200 miles offshore.

As the Russian Navy positioned its fleet in menacing fashion on the Black Sea in the weeks before the war, Ukraine raced to prepare defenses and its military described the Neptune as a vital weapon being added to its arsenal.

It is unclear how many Neptune missiles Ukraine’s Navy has. But if it was a Neptune that hit the Moskva, it would be a demonstration of the weapon’s effectiveness. The Ukrainians have called on the West to deliver sophisticated anti-ship weapons since the war began.

The Pentagon estimates that the Russian Navy has “a couple of dozen ships” in the Black Sea and the Sea of Azov, and Ukraine has had a hard time countering Russia’s naval dominance.

In March, Ukraine’s military said it had destroyed a Russian ship at the southern Ukrainian port of Berdiansk, which is under Russian occupation, and videos and photos reviewed by The New York Times confirmed at the time that a Russian ship was on fire at the port.

Writing for the Center for International Maritime Security this month, he said that “these behavioral changes limit Russia’s ability to utilize their fleet to their advantage,” and that “the added stress of sudden combat increases fatigue and can lead to mistakes.”

The flagship vessel entered service in the early 1980s, was renamed the Moskva in 1996 and was partially refitted in 2020, according to the Russian news media. It was an integral part of the Russian advance in this war.

It was also the vessel that Ukrainian troops famously told off as it approached a Ukrainian garrison on Snake Island on the Black Sea.

According to an audio exchange made public in late February, a Russian officer told the Ukrainians to surrender. “This is a Russian military warship,” the officer said. “I suggest you lay down your weapons and surrender to avoid bloodshed and needless casualties. Otherwise, you will be bombed.”

A Ukrainian soldier offered a simple, if obscene, refusal, using words that have become a rallying cry around Ukraine.