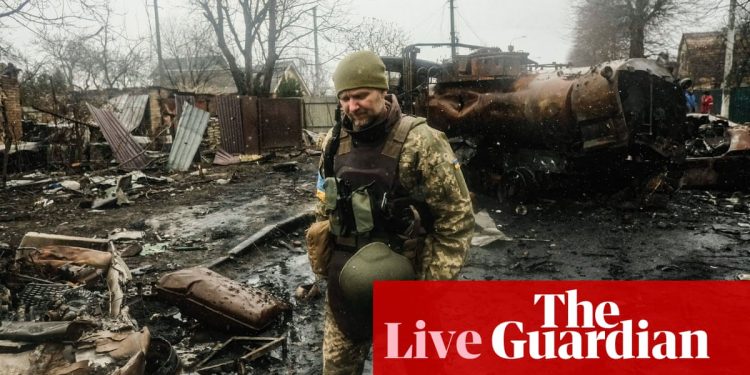 Ukraine has accused Russian forces of committing a “massacre” in Bucha, a town just 30km northwest of the capital Kyiv.

Bodies of civilians – many with bound hands, close-range gunshot wounds and signs of torture – were found littering some streets after Ukrainian troops reclaimed the town.

This is what we know at this stage about what happened in Bucha, as reported by Agence France-Presse.

Bucha, a commuter town of around 37,000 outside Kyiv, as well as the nearby town of Irpin, saw fierce fighting since Russia invaded Ukraine on 24 February.

Bucha was occupied by the Russian army on the third day of the war, on 26 February, and remained inaccessible for more than a month. Many residents were trapped by the incessant fighting and deprived of water and electricity while surviving in freezing temperatures.

When shelling stopped on Thursday, Ukrainian forces were only able to fully enter the town.

The journalists also reported seeing the bodies of at least 22 people in civilian clothes on a single street in the town. One was on the pavement near a bicycle, others had bags of provisions near them. Another man was found with his hands tied behind his back.

These reports were corroborated by Associated Press journalists who said they saw the bodies of at least 21 people in various places around Bucha. One group of nine, all in civilian clothes, were reportedly scattered around a site that residents said Russian troops used as a base. They appeared to have been killed at close range. At least two had their hands tied behind their backs, one was shot in the head, and another’s legs were bound, AP reported.

The cause of death of the victims found has not been able to be immediately determined.

Witnesses of alleged atrocities in Bucha told the Guardian that Russian soldiers had fired on men fleeing the town, and had killed civilians at will. Taras Schevchenko, 43, said Russian soldiers had refused to allow men to leave through a humanitarian corridor, instead shooting at them as they fled across an open field. Bodies, he said, were scattered on the pavements, with some of those killed having been “squashed by tanks … like animal skin rugs”.

Shevchenko’s mother, Yevdokia, 77, said she had witnessed an elderly man who had challenged a Russian soldier being shot dead as his wife stood next to him. “They shot him dead, and ordered the woman to leave,” she said. The accounts could not be independently verified.

According to the mayor of Bucha, Anatoliy Fedoruk, the victims were killed by Russian forces with a “bullet in the back of the neck”.

The corpses of 57 people were found in a mass grave, the chief of local rescue efforts Serhiy Kaplychniy, said as he showed AFP the trench where the bodies lay.

The mass grave is behind a church in the town’s centre. Some of the bodies were either unburied or partially buried. They were all dressed in civilian clothes.

On Sunday Mayor Fedoruk said 280 people were buried in mass graves because they could not have be buried in cemeteries that were within firing range.

“We found mass graves. We found people with their hands and legs tied up… with bullet holes in the back of their heads,” presidential spokesman Sergiy Nikiforov told the BBC Sunday.

The mayor of Kyiv who went to Bucha on Sunday, Vitaly Klitschko, told AFP that the exact number of victims was not yet known.

“We believe that more than 300 civilians died,” he said. “This is not a war, it is a genocide, a genocide of the Ukrainian population.”