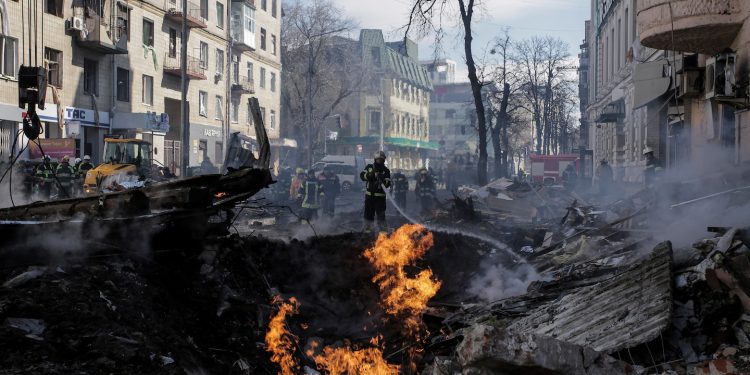 Russian President Vladimir Putin said Wednesday that his country’s attack on Ukraine is going according to plan and that the West is trying to “cancel Russia.”

“The special operation is developing successfully, in strict accordance with preapproved plans,” he said in a lengthy video address to government officials.

He claimed that Russian soldiers “do everything that depends on them to avoid losses among the civilian population of Ukrainian cities.” According to the United Nations, at least 726 civilians have been confirmed killed, including 52 children, while 1,174 have been injured — mostly as a result of shelling and airstrikes. The organization says its figures are incomplete and that the actual civilian toll is evidently much higher.

The meeting, which aired on Russian state television, came right after Ukrainian leader Volodymyr Zelensky pleaded with U.S. lawmakers for additional military aid and the creation of a “humanitarian no-fly zone” over Ukraine so that “Russia would not be able to terrorize [Ukrainian] free cities.”

Putin attempted to justify the presence of the Russian forces across all of Ukraine despite the initial stated goal of the “special operation” to help separatist-controlled “republics” in eastern Ukraine’s Donbas area, which Moscow recognized as last month as independent states.

“If our troops operated only on the territory of Donbas republics, helped them liberate their territory, this would not have been the final solution, would not have led to peace, and would not eliminate the threat to Russia,” he said.

He said a Donbas-limited operation would have created “a new front line” around the region and that “the armed conflict would drag on endlessly.”

The Russian leader also took the opportunity to directly address citizens of Western countries to tell them that their “ruling elites” are to blame for the economic ripples that the invasion of Ukraine has sent across markets.

“Now they are trying to convince you that all your difficulties are the result of some hostile actions by Russia and that from your wallet you need to pay for the fight against the mythical Russian threat,” Putin said. “All this is a lie!”

He also claimed that the West is trying to “cancel Russia” and doubled down on eyebrow-raising rhetoric likening international pressure on Russia to “antisemitic pogroms that the Nazis staged in Germany” before and during World War II.