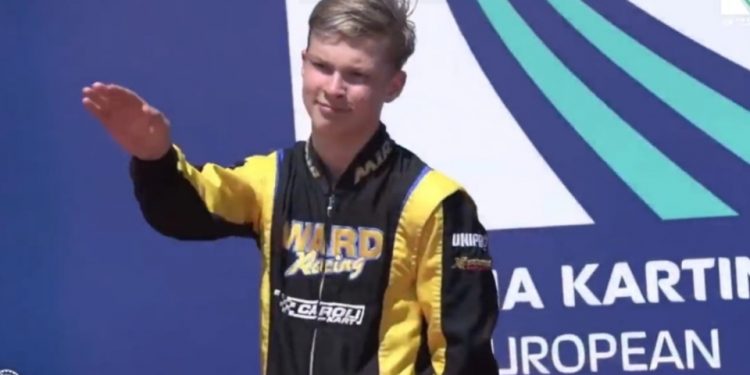 A teenage Russian karter is being investigated by the sport’s world governing body, after appearing to make a Nazi salute on the winner’s podium.

The FIA announced it had opened an investigation on Monday after racer Artem Severiukhin was captured seeming to make the fascist gesture during his victory celebration.

Fifteen-year-old Severiukhin was filmed after winning an FIA Karting European Championship race in Portugal on Sunday thumping his chest on the podium and extending his right arm.

A former junior Russian champion, he was seen laughing after the incident, as his actions drew worldwide attention. Footage of the salute has been viewed more than 1.3 million times on social media.

The FIA confirmed on Tuesday (Australian time) an “immediate investigation into the unacceptable conduct of Mr Artem Severiukhin”.

“The FIA will communicate shortly on the further steps that will be taken in this case,” it said.

The salute occurred as the national anthem of Italy was played – Severiukhin competes under the Italian flag because of sanctions imposed on Russia following its invasion of Ukraine.

The action has also cost the teenager his contract with his Swedish team Ward Racing.

The organisation said in a statement that Severiukhin’s actions were considered a “manifestation of unsportsmanlike behaviour, an unacceptable violation of the ethical and moral sports codex”, and terminated the contract.

“Ward Racing is deeply in shame of the pilot’s behaviour, which it condemns in the strongest possible terms,” it said.

Severiukhin posted a video on the Russian Automobile Federation’s Telegram channel on Monday, according to The Guardianwhere he apologised and said the gesture was not in support of fascism.

“I would like to apologise for what happened yesterday at the European Karting Championship,” he said.

“Standing on the podium, I depicted a gesture that many perceived as a Nazi greeting. But that’s not true – I have never supported Nazism and consider it one of the most terrible crimes against humanity.”

“I know it’s my fault, I know I’m stupid, and I’m ready to be punished. But please understand that I did not support Nazism or fascism with this gesture.”

CarMax Stock: A Leading Franchise At A Steep Discount (NYSE:KMX)

CarMax Stock: A Leading Franchise At A Steep Discount (NYSE:KMX)

20000 years ago, two American cheetahs fought to the death in a Grand Canyon cave – Livescience.com