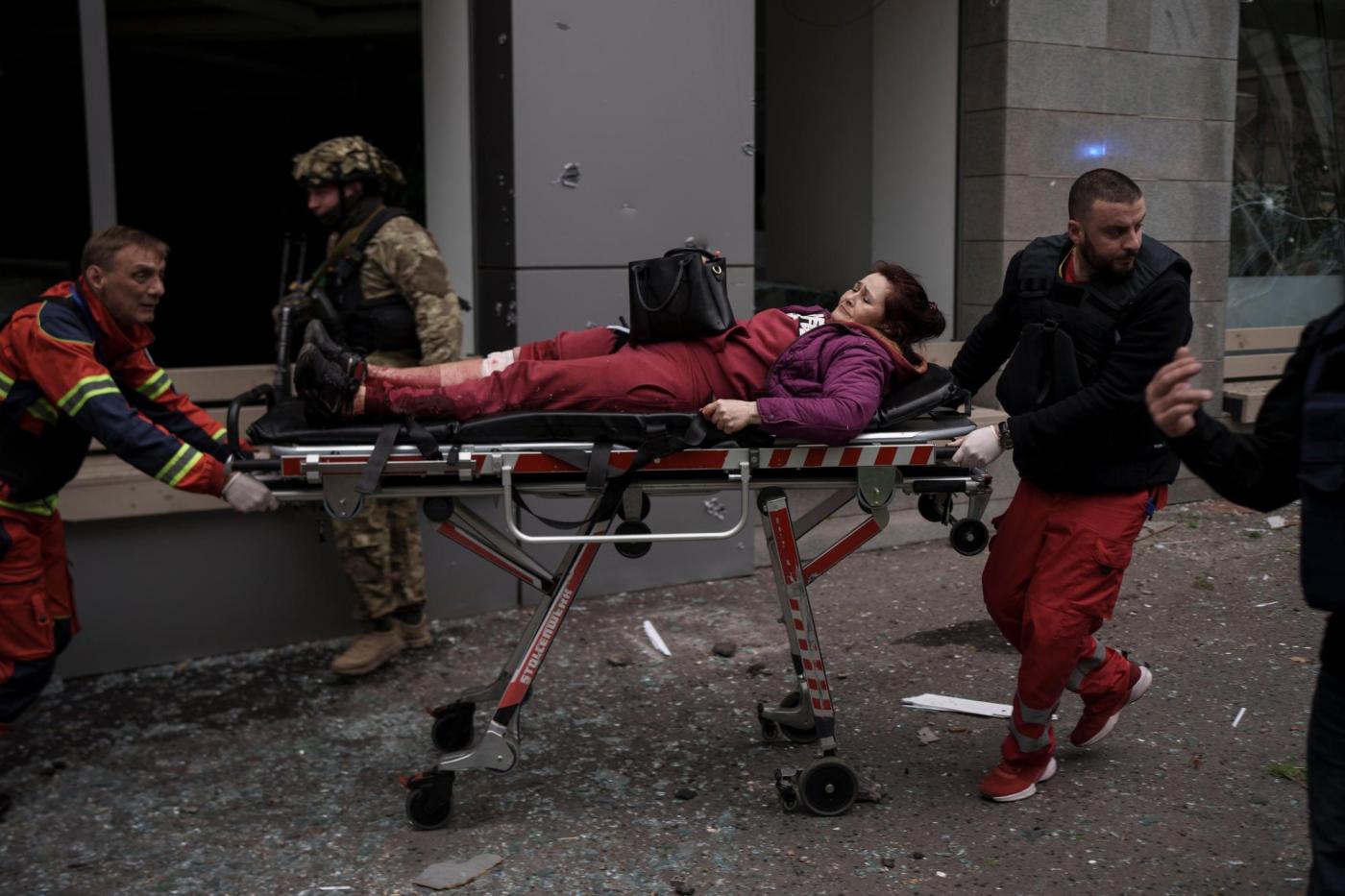 LVIV, Ukraine (AP) — Russian missiles hit the western Ukrainian city of Lviv on Monday, killing at least seven people, Ukrainian officials said, as Moscow’s troops stepped up strikes on infrastructure in preparation for an all-out assault on the east.

Plumes of thick, black smoke rose over the city after a series of explosions shattered windows and started fires. Lviv and the rest of western Ukraine have seen only sporadic strikes during almost two months of war and have become a relative safe haven for people from parts of the country where fighting has been more intense.

Ukrainian Prime Minister Denys Shmyhal, meanwhile, vowed to “fight absolutely to the end” in strategically vital Mariupol, where the last known pocket of resistance in a seven-week siege was holed up in a sprawling steel plant laced with tunnels. Russia has repeatedly urged forces there to lay down their arms, but those remaining ignored a surrender-or-die ultimatum on Sunday.

Seven people were killed and 11 wounded in overnight missile strikes, according to Lviv Mayor Andriy Sadovyi and the regional governor, Maksym Kozytskyy. The governor said the Russian strikes hit three military infrastructure facilities and a tire shop. He said the wounded included a child, and emergency teams were battling fires caused by the strikes

A hotel sheltering Ukrainians who had fled fighting farther east was among the buildings badly damaged in the attack, the mayor said.

“The nightmare of war has caught up with us even in Lviv,” said Lyudmila Turchak, 47, who fled with two children from the eastern city Kharkiv. “There is no longer anywhere in Ukraine where we can feel safe.”

A powerful explosion also rocked Vasylkiv, a town south of the capital of Kyiv that is home to a military airbase, according to residents. Video posted on social media sites showed smoke in the area after the blast. It was not immediately clear what was hit, and there was no official confirmation from authorities.

Military analysts say Russia is increasing its strikes on weapons factories, railways and other infrastructure targets across Ukraine to wear down the country’s ability to resist a major ground offensive in the Donbas, Ukraine’s mostly Russian-speaking eastern industrial heartland.

The Russian military said its missiles struck more than 20 military targets in eastern and central Ukraine in the past day — including ammunition depots, command headquarters and groups of troops and vehicles. Meanwhile, it said artillery hit another 315 Ukrainian targets, and warplanes conducted 108 strikes on Ukrainian troops and military equipment. The claims couldn’t be independently verified.

Gen. Richard Dannatt, a former head of the British Army, told Sky News the strikes were part of a “softening-up” campaign by Russia ahead of a planned ground offensive in the Donbas.

Deputy Prime Minister Iryna Vereshchuk said Ukraine had been negotiating passage from cities and towns in eastern and southeastern Ukraine, including Mariupol and other areas in the Donbas. The government of the Luhansk region in the Donbas said four civilians trying to flee were shot dead by Russian forces.

Russia is bent on capturing the Donbas, where Moscow-backed separatists already control some territory, after its attempt to take the capital failed.

“We are doing everything to ensure the defense” of eastern Ukraine, President Volodymyr Zelenskyy said in his nightly address to the nation on Sunday.

The looming offensive in the east, if successful, would give Russian President Vladimir Putin a badly needed victory to point to amid the war’s mounting casualties and the economic hardship caused by Western sanctions.

The capture of Mariupol is seen as a key step in preparations for any eastern assault since it would free Russian troops up for that new campaign. The fall of the city on the Sea of Azov would also hand Russia its biggest military victory of the war, giving it full control of a land corridor to the Crimean Peninsula, which it seized in 2014, and depriving Ukraine of a major port and prized industrial assets.

The city has been reduced to rubble in the siege, but a few thousand fighters, by Russia’s estimate, are holding on to the giant, 11-square-kilometer (4-square-mile) Azovstal steel mill.

“We will fight absolutely to the end, to the win, in this war,” Shmyhal, Ukraine’s prime minister, vowed Sunday on ABC’s “This Week.” He said Ukraine is prepared to end the war through diplomacy if possible, “but we do not have intention to surrender.”

Many Mariupol civilians, including children, are also sheltering at the Azovstal plant, Mikhail Vershinin, head of the city’s patrol police, told Mariupol television.

An estimated 100,000 people remained in the city out of a prewar population of 450,000, trapped without food, water, heat or electricity.

The relentless bombardment of Mariupol — including on a maternity hospital and a theater where civilians were sheltering — along with street fighting have killed at least 21,000 people, by Ukrainian estimates.

After the humiliating sinking of the flagship of Russia’s Black Sea Fleet last week in what the Ukrainians boasted was a missile attack, the Kremlin had vowed to step up strikes on Ukraine’s capital.

Ukraine says it hit the Russian warship Moskva with two Neptune missiles; Russia said only that it sank while being towed after a fire. Russia said its crew evacuated, but their fates remained unclear. Footage posted by the Russian military on Sunday showed Russia’s naval commander inspecting rows of sailors, identified as being from the ship, in the Moskva’s home port of Sevastopol in Crimea. It was unclear how many sailors were in the group.

Recent aerial attacks have also hit Kyiv and the eastern city of Kharkiv, where shelling on Monday killed at least three people and wounded three others, according to AP journalists on the scene. One of the dead was a woman who appeared to be going out to collect water in the rain. She was found lying bloodied with a water canister and umbrella by her side.

Zelenskyy called Sunday’s bombing in Kharkiv “nothing but deliberate terror.”

Zelenskyy also appealed for a stronger international response to what he said was the brutality of Russian troops in parts of southern Ukraine, where he accused them of torture and kidnappings. He urged the world to send more weapons and apply tougher sanctions against Moscow.

“Russian forces are destroying Mariupol,” he added, claiming Russia wanted to wipe cities in the Donbas “off the face of the Earth.”

Associated Press journalists Nico Maounis and Philip Crowther in Lviv, and Adam Schreck in Kyiv, Ukraine, contributed to this report, as did other AP staff around the world.

Eating less helps you lose weight. But it’s exercise that keeps the kilos off

Eating less helps you lose weight. But it's exercise that keeps the kilos off