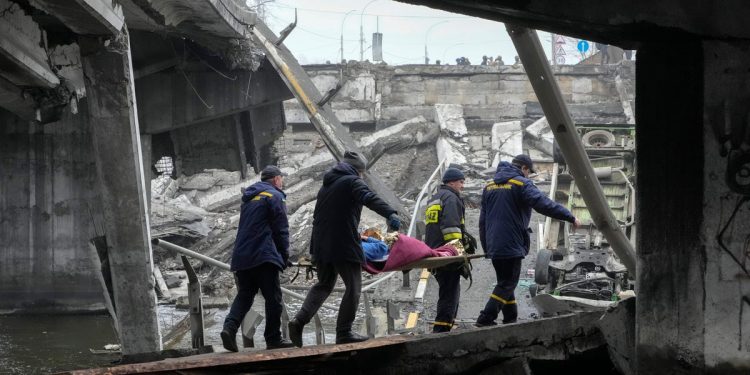 
Ukrainian officials in the besieged southern port city of Mariupol alleged on Friday that Russian troops are not letting residents bury their dead.

“Russian troops have begun the process of exhuming bodies that were previously buried in the yards of residential buildings,” Mariupol’s city council said in a Telegram message, citing local residents. “Moreover, the invaders forbid the burial of people killed by them.”

The city council accused Russian troops of placing an “overseer” in people’s yards to prevent them from burying friends or family.

Earlier in April, the city council accused Russia of using mobile crematoriums to burn bodies of Ukrainian civilians who have been killed in the ongoing war.

The city council said Russian leadership “ordered the destruction of any evidence of crimes committed by its army in Mariupol.”

It reiterated that message again on Friday, accusing Russian troops of using “every way to hide the traces of their war crimes.”

Mariupol has been bombarded for weeks by surrounding Russian forces, who have targeted civilian areas that include schools, shelters, theaters, and hospitals.

Ukrainian President Volodymyr Zelenskyy said on Monday that “tens of thousands” of civilians could be dead in the strategic port city.

Despite Russia’s devastating shelling campaign against the city, it has so far remained in Ukrainian hands.

UK intelligence on Thursday said Ukrainian defenders of Mariupol have tied down a “significant” number of Russian troops and equipment, which may soon be needed elsewhere.

As Russian President Vladimir Putin’s forces prepare for a renewed offensive in Ukraine’s eastern Donbas region — which Ukraine and the West have warned is on the horizon — that campaign may be limited by the taxing fight for Mariupol.

What Twitter’s ‘poison pill’ is supposed to do against Musk