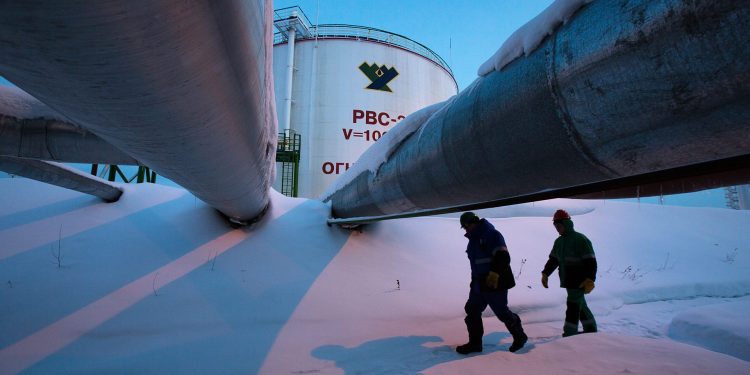 “We’re in a hot-box button-panic mode,” Perkins added. “If Russia shuts off the gas and oil, Europe is going to be scrambling this winter to maintain heating, and just maintain their economies,” he said.

Russia’s Gazprom on Tuesday informed Poland and Bulgaria’s state gas companies, PGNiG and Bulgargaz, that it will halt gas supplies after the two countries refused President Vladimir Putin’s demands to pay for supplies in the Russian ruble.

The escalation sent the Dutch wholesale gas contract for the day-ahead, a benchmark for Europe, up more than 20% Wednesday. Dutch TTF Natural Gas futures are up almost 60% year-to-date.

“Expect an elevated price and lots of volatility for the next few years,” Perkins warned, describing his forward market outlook as “slightly bearish in the front” but “constructive and bullish long term.”

“Given where prices are right now, and the flows of LNG [liquefied natural gas] to northwest Europe, it’s actually a bearish situation barring the complete removal of Russian gas,” he said. “Given that they’ve fired the first missile … everybody else is on notice, so those bearish bets are trimmed back,” he added.

“In the winter, all bets are off,” Perkins said. “Without Russian gas, which is about 40% of their gas supply or their demand for gas, it’s really difficult to see how the market balances without running out of gas.”

Employees pass beneath pipes leading to oil storage tanks at the central processing plant for oil and gas at the Salym Petroleum Development oil fields near the Bazhenov shale formation in Salym, Russia.

Last year, the European Union imported 155 billion cubic meters of natural gas from Russia, accounting for around 45% of EU gas imports and close to 40% of its total gas consumption, according to a recent report from the International Energy Agency.

European policymakers have pushed back on Putin’s demand, saying it violates existing contracts already agreed in dollars or euros. Europe is still weighing a full ban on Russian imports, despite its broad reliance on Russia for energy. European energy ministers are expected to discuss next steps at a meeting in France as soon as Monday next week, according to a recent Reuters report.

The U.S. and U.K. have moved to ban Russian energy imports, but European countries with a high dependency on Russian supply, like Germany, have been reluctant to follow. Germany has indicated it could wean itself off of Russian oil by the end of the year.

“This is a clear escalation of risks in gas markets,” analysts at MUFG said in a research note Thursday, describing the Russian ban as a “major turning point for European gas markets.”

“We believe it is in the interest of both the EU and Russia to work out a solution that brings gas payments in compliance with the EU’s legal requirements … given the unprecedented burden a halt in gas flows would have across the continent,” MUFG analysts said, warning that an “immediate interruption” of Russian flows to northwest Europe could raise TTF prices north of 200 euros per megawatt-hour “for an extended duration.”