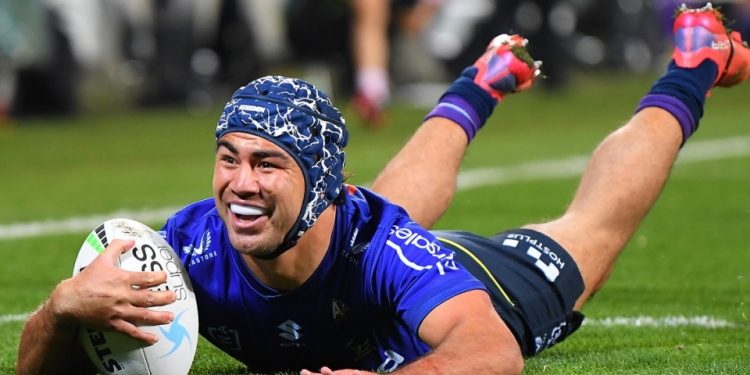 Melbourne Storm has completed a second-half demolition job on New Zealand Warriors, running in 10 unanswered tries to post a record 70-10 victory in their Anzac Day clash at AAMI Park.

The haul equalled the most points scored by Storm, and also the most ever conceded by the Warriors.

Winger Xavier Coates scored four tries among the side’s 13 but had to share star status with Ryan Papenhuyzen.

The superstar fullback scored twice in the space of five minutes in the second half to break the back of the Warriors and put the game out of reach.

He finished with a personal haul of 22 points from his 68 minutes before being rested.

The visitors were well in the hunt in the opening 40 minutes and only trailed 16-10 at half-time.

In that half they were hurt by two runaway tries by Storm, with the first coming as the Warriors were set to score in the seventh minute.

Winger Ed Kosi, who had a night to forget, spilt the ball with the line beckoning with Papenhuyzen pouncing and then offloading to halfback Jahrome Hughes, who ran 70 metres to score.

Winger Nick Meaney then intercepted a Shaun Johnson pass to also score a long-range try in the 26th minute.

The Warriors’ two tries also came in the first half when some quick hands by Chanel Harris-Tavita caught Storm short, with Dallin Watene-Zelezniak touching down.

And the hooker Wayde Egan found the tryline from a Johnson kick.

But that was all the Warriors fans had to celebrate as their game completely fell apart in the second half with Melbourne scoring 10 unanswered tries.

With more than 80 per cent of possession, Storm ran rampant with even prop Nelson Asofa-Solomona putting up a bomb for Papenhuyzen’s first try.

But their celebrations were tempered with Watene-Zelezniak knocked out cold and taken from the field in a medi-cab.

Chasing the kick he collided with teammate Bayley Sironen and then bounced into Asofa-Solomona’s knee, falling face first to the ground.

Reports were that he was conscious and talking in the change rooms.

Coates scored a 22nd-minute try, but the magic came in an eight-minute spell in the second half, crossing three times.

Prop Matt Lodge stood up for the Warriors, with 116 run metres, 42 post-contact metres while making 27 tackles.

But full-time couldn’t come quick enough for the visitors as the scoreboard continued to tick over in Storm’s favour.