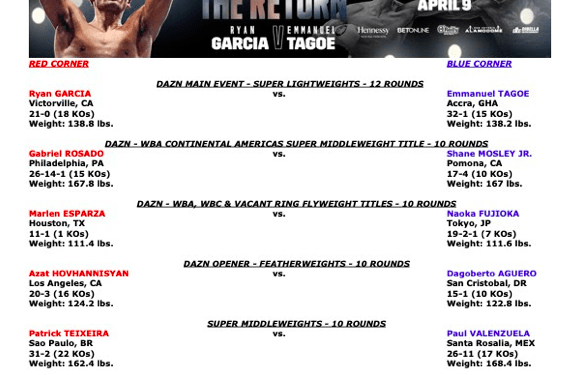 
Ryan Garcia has had an interesting last couple years. When we saw him last in a ring, it was Jan. 2, 2021, and he won a step-up fight against capable Luke Campbell (TKO7). Chatter ensued, about what juicy matchups might be made with “King Ry.” But life intruded. Injury issues, mental health battling, drama regarding his relationship with Eddy Reynoso and Team Canelo…the young man had a full plate of things to deal with, aside from in-ring action.

It is looking like things are smoothed out for Ryan Garcia (pictured above in Tom Hogan/Golden Boy pic), who on Friday made weight for his ring return against 32-1 Emmanuel Tagoe at the Alamodome in San Antonio, Texas, and on DAZN. This face-off is a “lightweight plus” battle; Garcia, with new Trainer Joe Goossen looking on in benevolent patriarch fashion, was 138 3/4, while Tagoe hit 138 1/4. For Ryan Garcia haters, is there a chance that Tagoe springs the upset on the Cali boxer? Sure, mostly always there’s a chance in most every prize fight that the underdog could rise up and cause jaws to drop.

Tagoe, though, doesn’t possess excessive pop, and he last fought a year and a half ago, so it remains to be seen how sharp he’ll be. He’s beaten some names, in Mzonke Fana and Moses Paulus, and downed Mason Menard (MD) in his last outing.

You see that Tagoe has some attributes, he’s unorthodox, he’s not predictable and we can see Ryan Garcia getting excited and trading with Tagoe as the Accra, Ghana boxer ducks and dips and rips. But the speed and power combo of Ryan Garcia will be of a much different caliber than he’s had to deal with, quite likely.