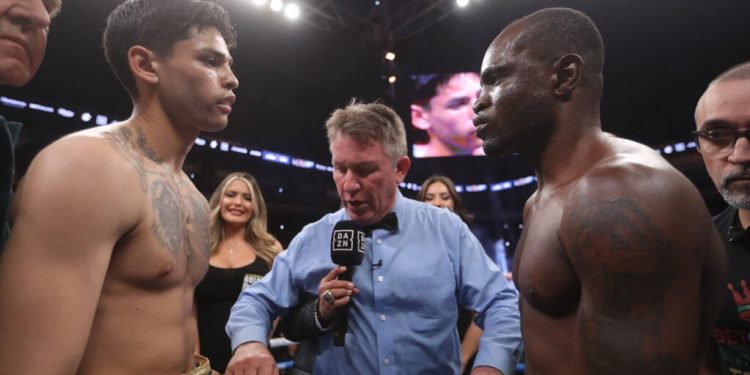 
After a considerably fraught 14-month layoff that included questions about his work ethic, the stability of his camp, his willingness to fight Devin Haney, and even his mental health, Ryan Garcia (22-0, 18 KOs) returned to the ring tonight against Ghanan Emmanuel Tagoe (32-2, 15 KOs) and scored an easy twelve round unanimous decision over his opponent at the Alamodome in San Antonio. Tagoe, upon suffering a second-round knockdown, was often unwilling to engage against the gifted Los Angeleno. Garcia was never in trouble for a single second against a fighter who seemed to go into survival mode early and never gave Garcia an opportunity to open up. Tagoe’s strategy, such that it was, amounted to defense first, last, and always. Garcia is a wildly talented fighter, but it’s hard to look great against an opponent whose focus is entirely on not getting knocked out. Tagoe came into the fight as the 9th ranked lightweight in the world and was on a 32-match winning streak, but never seemed serious about taking any chances at all,

The meteoric rise of Garcia has been slowed due to all of his personal issues. This was Garcia’s first fight under the tutelage of Joe Goossen (who replaced Eddie Reynoso, despite leading Garcia to 5 KOs in 5 fights), and he was clearly dominant, if not spectacular. This bout was billed as a “comeback” fight for Garcia by DAZN, but it’s hard to know what Garcia, an undefeated fighter, was coming back from – other than the tumultuous soap opera of his personal and professional life. What’s next for Ryan Garcia, then? The top four names in the division are Garcia, Gervonta Davis, Devin Haney, and George Kambosos; all have significant question marks by their names. As good as the four of them have looked at times, none have reached the level of greatness at this point – largely because they haven’t (at least yet) fought each other – that would give the division any clarity. We know these four guys are talented, but until they test their mettle against one another, we don’t know how loaded this division is. It’s time to get past the hype and have them duke it out. Haney and Kambosos are going first. That result should provide fans with a sense of where the division stands, but Davis and Garcia can’t feast off the B-list forever. At some point, they have to take the risk of fighting an opponent that we don’t know for 100% certain that they can beat.

Until then, they and we are in limbo.

Folk hero/fan favorite Gabriel Rosado (26-15-1, 15 KOs) and the progeny and namesake of “Sugar” Shane Mosley, Shane Mosley Jr (18-4-1, 10 KOs), went ten rounds, with the son of Sugar winning a majority decision by scores of 98-92, 97-93, and one mysterious card of 95-95. The first three rounds were met with a surprising amount of boos from the crowd at the Alamodome, but as the fight wore on, Junior’s superior boxing skills and ring generalship were a clear advantage over the always competitive (if often overmatched) Gabriel Rosado. Any right mind would have scored this fight easily for MosleyJr., but boxing is as boxing does. I guess we can just be grateful that the right fighter won. To be fair, though, while this fight was called the co-headliner with Garcia/Tagoe, this was a bout between two guys who are really opponents. The kind of fighters that champions choose to take on to keep themselves fresh for a bigger fight down the road.

That should take nothing away from Mosley Junior’s performance tonight, though. Rosado has been in the ring with better competition, and his recent 3rd round TKO of top prospect Bektemir Melikuziev and competitive UD loss to Jaime Munguia gave him a brief career boost. The problem for Rosado is being a 36-year-old fighter who has been through a number of wars (most of which ended in losses) appears to have taken its toll. As solid a fighter as Mosley Jr. is, if you are going to be a super middleweight champion, this is a fight you are supposed to win if you are Rosado. Not only did Rosado lose, he often looked out of his league from a pure skills-based aspect. Mosley Jr. is no world-beater, but he was a clear Rosado beater tonight. I suspect there’s a decent payday in his future, one that will likely end in a loss if it involves a step up in competition. There is no hall of fame for the “pretty good.” Both Rosado and Mosley Jr. are pretty good.

In a tightly contested title unification bout, Houston-based WBC Flyweight champion Marlen Esparza (12-1, 1 KOs) defeated 46-year-old WBA belt holder Naoko Fujioka (19-3-1, 7 KOs) from Japan in a 10 round title bout. The scorecards were, well, ridiculously typical of boxing scorecards. Two of the three judges scored the fight 100-90 for Esparza, while judge Lisa Giampa favored Esparza by a more reasonable score of 97-93. To have not scored one round for Fujioka is positively embarrassing. Her activity and punch count was on par with Esparza’s – by any rational set of eyes; this was a close fight. Here again, though, we have a fight scored by two blind mice out of three. That being said, Esparza did land the cleaner, sharper blows despite being wobbled by Fujioka in the 2nd, 7th, and 8th rounds. Esparza likely should have scored a knockdown in the 4th when she landed a straight right to the top of Fujioka’s skull, and she fell forward onto the canvas. The referee ruled the fall as a slip, but the replay argued strongly against that judgment.

Esparza more than managed to keep up with Fujioka’s pressure (out landing her 120-107 in punch count stats) and rightly won the fight on points, but the width of the two scorecards, once again, should leave a sour taste in the mouths of fight fans. Still, all credit is due to Esparza, who now has unified the WBA and WBC titles, setting herself up for more paydays in the future. When interviewed by our own Abraham Gonzalez earlier this week, one might have gotten the impression Esparza had one foot out of the fight game – looking to spend more time with her son. She didn’t fight that way tonight, though. She gave slightly better than she got, and the right fighter added a new belt to her wardrobe. I may eventually bore readers with this whinge, but I have to say, the two-minute rounds in women’s boxing pay a disservice to the sport. The extra minute in each round would have tested the two combatants to the fullest and likely would have made the bout a more entertaining contest. As usual, the sexism in the sport of boxing not only holds back the fighters but women as a whole.

The first televised bout of the evening between Azat Hovhannisyan (21-3, 17 KOs) and Dangoberto Aguero (15-2, 10 KOs) was short-lived. While Azat failed to stick the landing (hilariously) on his pre-fight backflip, he blasted out Aguero with a TKO victory in the 2nd round. Once Aguero was hurt, Hovhannisyan did not let up, and Aguero could not weather the storm. Azat’s non-acrobatic performance, the Russian judge, would have likely been harsh on his gymnastics) could put him in the title chase in the super bantamweight division.