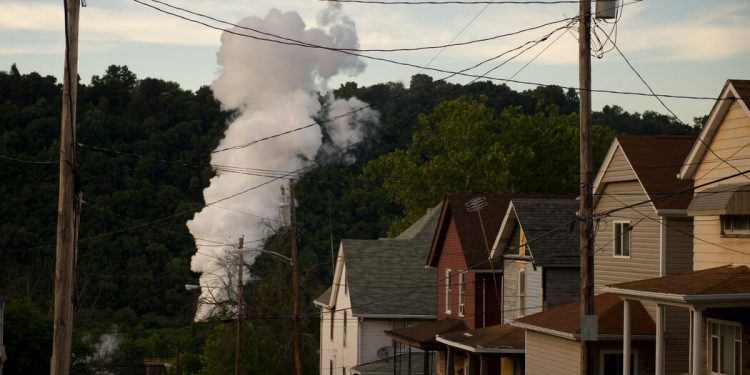 The Securities and Exchange Commission has said for the first time that public companies must tell their shareholders and the federal government how they affect the climate, a sweeping proposal long demanded by environmental advocates.

The nation’s top financial regulator gave initial approval to the much-anticipated climate disclosure rule at a meeting on Monday, moving forward with a measure that would bolster the Biden administration’s stalled environmental agenda.

The proposed rule — approved by a 3-to-1 vote — aims to give investors a clearer picture of the risks that climate change might pose to companies, because of disasters like droughts and wildfires, changes in government environmental policies or consumers’ declining interest in products that contribute to global warming.

But the consequences could be more far-reaching: Environmental and corporate-governance advocates said the transparency the rule requires would hold companies accountable for their role in climate change, and give investors more leverage in forcing changes to business practices that contribute to rising global temperatures.

“It will make it possible for all interested stakeholders, including shareholders, to then push companies to take real action,” said Bill Weihl, a former green energy czar at Google and director of sustainability at Facebook who now leads ClimateVoice, a group that encourages employees to press for climate actions.

The public will have up to 60 days to comment on the plan, which, if enacted, would set up a reporting framework for companies to provide information about climate-related risks in their annual reports and stock registration statements.

But the proposal has already provoked opposition from some business trade groups and may be challenged in court, which could delay its effective date. Much of the criticism has centered on to what extent emissions-related data falls under the S.E.C.’s jurisdiction.

A cornerstone of S.E.C. rules is requiring the disclosure of information that is “material” to investors, meaning they need it to make an informed decision about buying or selling a stock.

Representative Patrick T. McHenry of North Carolina, the ranking Republican on the House Financial Services Committee, called the proposal “tone-deaf and misguided” and said the climate risks were not a material issue for most businesses.

“The Biden administration is pushing its climate agenda through financial regulators because they don’t have the votes to pass it in Congress,” he said.

But many companies have already begun to release information about their greenhouse gas emissions; the S.E.C. estimates that a third of the 7,000 corporate annual reports it reviewed in 2019 and 2020 included some climate impact disclosures. Senator Jack Reed, Democrat of Rhode Island, said the proposed rule would bring order to the process.

“Publicly traded companies can no longer cherry-pick climate reporting, and investors will have a much better sense of their exposure to material climate risks,” he said.

Regulators have said the rule builds on guidance the S.E.C. issued in 2010 for companies about disclosing information on climate change. The S.E.C. took that action around the same time the Environmental Protection Agency began requiring some large companies to compile data on the emission of greenhouse gases.

“Over the generations, the S.E.C. has stepped in when there’s significant need for the disclosure of information relevant to investors’ decisions,” the commission’s chairman, Gary Gensler, said in a statement. And more investors have been pushing for such information, he said.

“Investors with $130 trillion in assets under management have requested that companies disclose their climate risks,” Mr. Gensler said.

The U.S. Chamber of Commerce, a business lobbying group, said it broadly supported the goal of climate disclosure by companies but wanted a more “clear and workable” rule that didn’t force companies to disclose immaterial risks.

“We will advocate against provisions of this proposal that deviate from that standard or are unnecessarily broad,” said Tom Quaadman, executive vice president of the chamber’s Center for Capital Markets Competitiveness.

In a discussion with investors after the commission vote, Mr. Gensler said the S.E.C. would seriously consider the comments from companies, investors and the legal community before it enacted a disclosure rule. “We look forward to the public comments,” he said.

Some companies — including Apple, Facebook, Google and Microsoft — already report extensive data and have set deadlines by which they hope to have zero carbon emissions overall. But the proposed rule, which runs more than 500 pages, would create a framework for all publicly traded companies.

Companies would be required to conduct three levels of analysis of their impact on the climate — an analysis that is consistent with the way scientists consider the environmental impact of business activity.

In the first two levels, companies would have to disclose annually the direct impact of their operations on climate change in terms of the products they make and any indirect effects on the environment that come with using electricity, trucks or other vehicles.

The third level is more extensive and involves assessing the so-called carbon footprint of suppliers, business travel and any assets a company leases. The S.E.C. proposal would require only the largest companies to report this level of climate impact — known as Scope 3 emissions — but would allow individual companies to decide if the information would be material to investors.

The disclosure of the Scope 3 emissions, which mainly include gases created by companies’ suppliers or more incidental operations, often dwarf the other two types. The requirement would not kick in for large companies for at least two years in most cases.

Todd Phillips, director of financial regulatory and corporate governance at the Center for American Progress, said he still had some questions about how the rule would address Scope 3 emissions. But he added that the proposed rule would give investors “access to important information they need to make informed investing decisions.”

When the commission said last year that it was weighing whether to propose climate rules, the public was invited to submit comment letters. A survey of the letters by Ceres, a nonprofit group that works with investors and companies to address environmental challenges, found that 65 percent of the comments filed by investment firms called for companies to be required to include Scope 3 emissions.

Some corporate executives are likely to welcome the proposed rule because they believe standardized climate disclosures will make it easier to compare the environmental efforts of companies.

Microsoft, for example, wrote a letter in support of the commission’s climate push. Large technology companies have cast themselves as leaders in moving away from fossil fuels, but they face headwinds as well: Microsoft, which aims to be “carbon negative” by 2030, recently reported a rise in emissions. The increase was almost wholly driven by an increase in Scope 3 emissions, as the company built new data centers and Xbox use soared in the pandemic.

Environmental advocates hope that rules requiring companies to measure and publicize their greenhouse gas emissions will encourage the businesses to take more aggressive steps to minimize their effect on the climate.

“There’s an old saying in business: What gets measured gets managed,” said Mr. Reed, the Rhode Island senator.

The Sierra Club and the Environmental Defense Fund both applauded the proposed rule and said it should be swiftly adopted. Ben Cushing, who leads the Sierra Club’s push for stronger climate disclosures, said the rule was “long overdue.”

“Companies have made commitments to address their climate impact without disclosing the full scope of their emissions, the risks their own businesses face from climate change or the relevant business plans to achieve their climate pledges,” he said.

Should the rule become final, it would be a notable victory for the Biden administration, which has struggled to carry out its broader climate agenda. The limited progress it has made with emissions-focused legislation has left financial regulation as one of the main tools it has to change the behavior of companies as climate change worsens.

Last week, one of the Biden administration’s nominees to serve on the Federal Reserve, Sarah Bloom Raskin, withdrew from consideration because of opposition from business groups and Republicans to some of her writings that argued financial regulators need to focus more on how companies affect the climate. She stepped aside after Senator Joe Manchin III, Democrat of West Virginia, said he would not vote to confirm her.

Russian convoy closing in on Kyiv after missile strikes cause devastation in Kharkiv, Ukraine