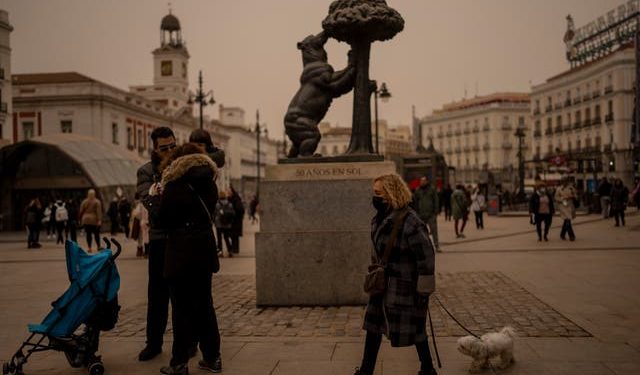 A huge dust storm swirling over Europe from the Sahara desert made it hard to breathe in large parts of Spain for a second day on Wednesday, and left a film of dirt on cars and buildings in France and Portugal.

The European Union’s Copernicus Atmosphere Monitoring Service said it is tracking the large cloud that has “degraded air quality across large parts of Spain, Portugal and France”.

While Spain is bearing the brunt of the storm, the dust spread much further afield, dumping ochre-coloured blobs on cars in Paris after mixing with falling rain, and coating buildings in Lisbon with a fine powder.

Spain’s national weather service said the particles could reach as far north as the Netherlands and western Germany.

The area of Spain rated by its national air quality index as “extremely unfavourable” – its worst rating – expanded from the start of the storm on Tuesday to include most of the nation’s southern and central regions, including Madrid and other major cities like Seville.

Madrid’s sky was tinged a dirty grey, with visibility reduced for a large swathe of the country.

Municipal cleaners swept up the dust from city streets, and photos on social media included images of red-tinged snow on a mountain range near Madrid.

In Spain’s south, the dust mixed with rain to produce mud.

“The air will then begin to clear little by little, although some floating dust will reach the Canary Islands (in the Atlantic Ocean) over the weekend,” he said.

To the relief of farmers, the storm front that pulled in the African dust is also forecast to bring more rain over the coming days to Spain’s parched fields and descending reservoirs.