Sahvir Wheeler makes it official: He’ll be back for Kentucky 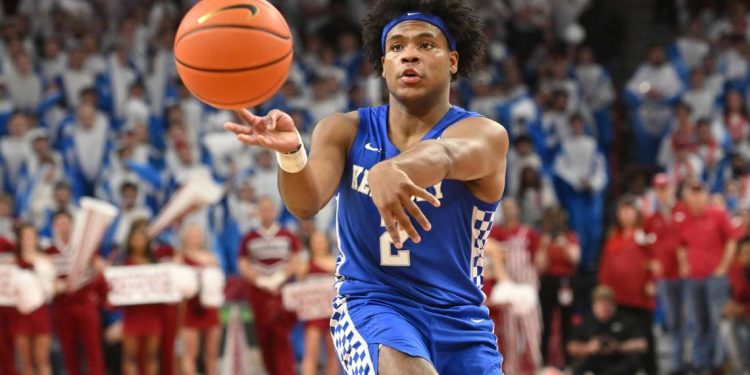 
One more of Kentucky’s cornerstone players from the 2021-22 men’s basketball season announced Sunday night that he’s coming back for a second season with the Wildcats.

Four days after national player of the year Oscar Tshiebwe decided to bypass the 2022 NBA Draft and stick around in Lexington, starting point guard Sahvir Wheeler announced the same choice in an Instagram post just hours before the deadline for players to declare entry.

Players had until 11:59 p.m. Sunday to make their NBA Draft intentions known.

Wheeler’s choice was widely expected after a previous social media post last week and some comments from head coach John Calipari during a Friday radio interview.

“Since everyone thinking the last post was a returning announcement, here’s your official one: IM BACK WATCH YOURS,” Wheeler posted Sunday night.

The 5-foot-9, 180-pound Wheeler started 29 of the 30 games in which he played last season as Kentucky finished 26-8 overall, earned a No. 2 seed in the NCAA Tournament and was upset by Saint Peter’s in the round of 64. Wheeler battled injuries off and on throughout the 2021-22 season but averaged 10.1 points and 6.9 assists per game in his first campaign as a Wildcat after transferring from Southeastern Conference rival Georgia.

NBAdraftroom.com did not include Wheeler among the top 12 point guards available in this year’s NBA Draft. Several mock drafts do not project him as being picked.

“The shooting piece is an important one because you have to be able to knock down shots in that league,” Bilas said. “Otherwise, they’re not going to guard you out there. They’ll go under screens. That’s what they did to him in college.”

“In order to be a good NBA player, he’s going to have to be a more reliable shooter.”

In leading the SEC in assists for a second straight season, Wheeler became a finalist for the Bob Cousy Point Guard of the Year Award. He was named to the All-SEC Second Team and had the third-best assist average among Division I players. He also had the second-best assist-to-turnover ratio among SEC players at 2.27-to-one.

Wheeler had eight or more assists in 12 games this past season.

On one of his radio shows, Calipari said Wheeler was the UK player who “stirs the drink.”

Even with the accolades and eye-catching statistics, Wheeler’s season had ups and downs. In the opening game against Duke, he had 16 points and 10 assists. The latter was the second-most assists by a player in his first game for Kentucky.

The downside also included Kentucky’s loss at Notre Dame. The Irish left Wheeler open for perimeter shots. After missing his five shots (two from three-point range), Wheeler watched from the bench in the final minutes of a possession-by-possession game. That completed a seven-game stretch in which he made one of 13 three-point shots.

Another low came barely two weeks later when Wheeler hurt his neck running blindly into a screen at LSU. He missed the next two games.

After the game at LSU, Calipari said of Wheeler, “he’s the engine on this thing. He gets us all moving.”

In his return, Wheeler had 21 points and eight assists in a victory over Tennessee.

In addition to Wheeler and Tshiebwe announcing they’ll return next season, Daimion Collins and CJ Fredrick have also said they’ll be back. Keion Brooks, Jacob Toppin and Shaedon Sharpe have all entered the NBA Draft but left open the possibility of returning. Lance Ware had not announced plans as of Sunday evening.

Five players have departed the program since last season: TyTy Washington entered the draft and plans to stay in it. Bryce Hopkins and Dontaie Allen entered the transfer portal, with Allen already announcing a commitment to Western Kentucky. Davion Mintz and Kellan Grady exhausted their eligibility.

Jerry Tipton has covered Kentucky basketball beginning with the 1981-82 season to the present. He is a member of the United States Basketball Writers Association Hall of Fame.
Support my work with a digital subscription
Tags: hellKentuckyofficialSahvirWheeler
Previous Post