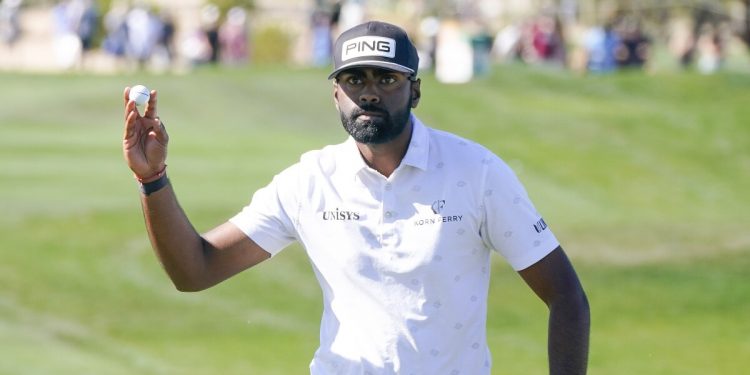 Sam Ryder brought down the house with a hole in one on the stadium 16th hole Saturday in the WM Phoenix Open, where newcomer Sahith Theegala topped a leaderboard as crowded as the course.

Ryder’s wedge shot on the 124-yard hole landed just right and short, bounced a couple of times, spun left and tumbled in. The rowdy fans on the 17,000-seat hole threw drinks in the air in celebration and littered the turf with bottles, cans and cups, leading to about a 15-minute delay.

“I don’t know how I could pick a hole over this one,” said Ryder, eight strokes behind Theegala after an even-par 71. “I don’t think there’s any hole that has the electricity that this one has.”

Ryder’s first tour ace was the 10th at No. 16 since the tournament moved to the course in 1997 and first since Francesco Molinari in the third round in 2015. Tiger Woods did it in 1997 before grandstands ringed the hole.

“It just ended up being a perfect 54-degree wedge,” Ryder said. “Everything always plays a little shorter in there, adrenaline or whatever it is.”

With about 200,000 fans packing firm and fast TPC Scottsdale on another sunny, 80-degree day in the Valley of the Sun, Theegala overcame a double bogey on the par-four second to shoot a 69.

Making his event debut on a sponsor exemption, Theegala had a 14-under 199 total for a one-stroke lead over defending champion Brooks Koepka. FedEx Cup champion Patrick Cantlay, Xander Schauffele, Scottie Scheffler and Talor Gooch were another stroke back.

“I’m really exhausted right now,” Theegala said. “Probably, I hit it in the desert five times. I got my ball stepped on twice, got my ball picked up twice. Very draining, for sure.”

Theegala is trying to become the first player to win on a sponsor exemption since Martin Laird in the 2020 Shriners Children’s Open. The 24-year-old Indian American grew up in Chino Hills and starred at Pepperdine. In 2020, he swept the three major college player of the year awards.

He’s playing for the fifth consecutive week, with his parents and some family members attending the last four in California and Arizona.

“It was hard to see them,” Theegala said. “Just engulfed in the sea of people.”

After hitting the lip of a fairway bunker en route to the double bogey on No. 2, Theegala rallied with birdies on Nos, 6, 7 and 8. He dropped a shot on the 11th, birdied the par-five 13th and holed a 15-footer on the par-four 17th.

“Obviously, really bad start and proud of the way I fought back there,” Theegala said. “But still trying to take it all in. There’s just is so much going on there too. Which is a good thing. I really enjoyed the fans out there.”

Koepka had a 68. The four-time major champion is the last player to win the event in his first appearance, doing it in 2015.

“I’m playing solid, so just go out and go play a good round tomorrow and see what happens,” Koepka said. “Just need to keep putting it the way I did. I feel confident. I like where my game’s at, and we’ll see.”

Scheffler flirted with his second 59 before settling for a 62. Seeking his first tour victory, he began the day nine strokes behind Theegala.

“I think it’s a fun event,” Scheffler said. “I think it would be a little bit draining if it was like this every week, but one week a year is pretty special.”

Scheffler played his first nine in seven-under 27 and added two birdies on his second nine. He was the last player on the tour to shoot a 59, doing it in the 2020 Northern Trust. Jim Furyk is the only player to break 60 twice in the PGA Tour, shooting 58 and 59.

The fourth-ranked Cantlay, a former UCLA standout also making his first start in the event, had a 68. Gooch birdied the last three holes for a 67, making a 40-footer on 18.

Schauffele, the leader at 14 under at the turn, shot a 69. He made a double bogey after driving into the water on the par-four 11th.

Matsuyama, the Masters champion who won in Scottsdale in 2016 and 2017, is making his first start since winning the Sony Open a month ago in Hawaii. Hoge won at Pebble Beach last week for his first PGA Tour title.