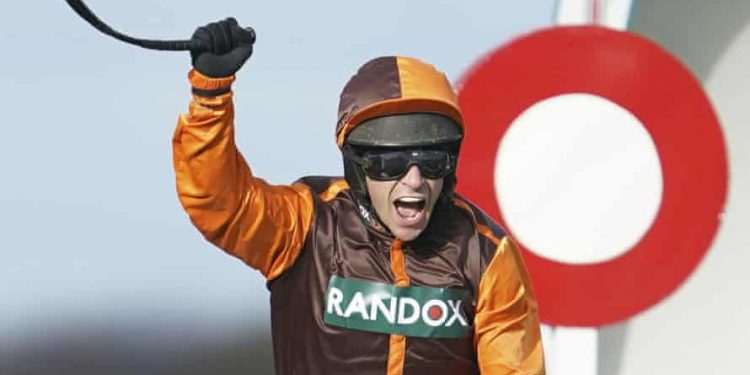 
Such is the enduring lure of the Grand National that one in four adults in Britain placed a bet on this race, prospecting for gold in a minefield of a 40-runner handicap. Not many got lucky, judging by the muted reaction at Aintree as Noble Yeats bounded clear to win at 50-1. But this was a result to warm the soul, not swell the wallet.

Earlier in the week Sam Waley-Cohen had announced this would be the final race of a career he has combined with running the £300m dentistry business he founded. Having won a Gold Cup on Long Run in 2011, few had expected him to top that riding a long shot 11 years later. But the 39-year-old summoned a ride of patience and poise to steer Noble Yeats gradually into the race before striking for home one fence from the finish to eclipse the 15-2 favourite, Any Second Now, by two lengths.

To add another twist to this extraordinary story, Noble Yeats had only been bought for Waley-Cohen by his father, Robert, in February – and had come ninth out of 24 runners in his last race at Cheltenham. And yet, on a boisterous Aintree day, a quiet miracle happened.

As a script it would surely have been rejected by Hollywood for being too outlandish. Yet after this victory it didn’t seem entirely reasonable for Waley-Cohen to suggest that his “doppelganger” Dominic West could play him in a star-studded film of this triumph.

It has become an iron law of the Grand National that horses seven and under don’t win. The last to do so was Bogskar in 1940, when war was on the mind, Aintree was packed with servicemen and sailors, and the headline in the Manchester Guardian hailed a “Winner Who Came Up Unnoticed”. More than 80 years later, that headline could happily be put back into service.

Yet everything about Waley-Cohen’s story has had a touch of stardust on it. Until now, he has perhaps been best known for getting the Duke and Duchess of Cambridge to rekindle their romance after their split in 2007 – tellingly, the pair tweeted their congratulations after the race.

But winning the greatest steeplechase of all, four-and-a-quarter miles of peril and drama over 30 jumps, surely will top that. “It’s a dream. I couldn’t believe it,” he admitted, before praising his dad and thanking his wife. “That is beyond words. It’s a fairytale, it’s a fantasy. Just full of love, happiness and gratefulness.”

Waley-Cohen also paid tribute to his brother Thomas, who died in 2004. “When you lose somebody you love, you realise you should make the most of life,” he said. “And also to try and put a lot of energy into every day – as you don’t know if it will be your last.”

This was the first National in front of fans since 2019, and from the stands and the bars 70,000 people watched on with pleasure and expectation, determined to make up for lost time. All afternoon Aintree hummed with a buzz that comes gratis at a major sporting event.

People cheered. People smiled. And most of all people drank, although at £5.80 for a can of Carling and £8 for a small wine, there was a price to pay on the bank balance as well as the liver.

But while the course was bathed in sunshine when the National began at 5.18pm, looks were deceptive. The temperatures remained defiantly stuck in single figures, while the wind was sharp and spiteful. Few of the 70,000 crowd, though, were deterred. This was a day when silk dresses outnumbered racing anoraks; of multiple stag and hen dos; an affirmation of fun and freer times after two years of a global pandemic.

The stories were not all positive, mind. Earlier in the day, Elle Est Belle, a six-year-old mare, died of a suspected heart attack after finishing fourth in the novices hurdle and Discorama was later revealed to have been put down after the Grand National.

Meanwhile as Aintree began to clean up, the bookmaker Neville Porter was revelling in his best Grand National day for over a decade. His afternoon began splendidly as three short-priced favourites, Edwardstone, Flooring Porter and Shan Blue, were all beaten. But the National was to provide even greater riches.

Before the race he had told the Observer: “We’re looking for a 50-1 or bigger winner, as most people won’t back them, to hit the jackpot. But they don’t come around very often.” Afterwards he couldn’t stop smiling. “We hit the jackpot and then some. It’s been a very good day.”

Waley-Cohen was also beaming as he confirmed that he would hang up his saddle for a life of Zoom and Microsoft Teams meetings running Portman Dental care. “It keeps me out of trouble,” he said. “Life will continue as before.

“I’ve said for ages that if I won the Grand National I would retire there and then. When you have a ride that goes as well as that it is wise to stick to that.”

And who could blame him after this, the perfect ending?