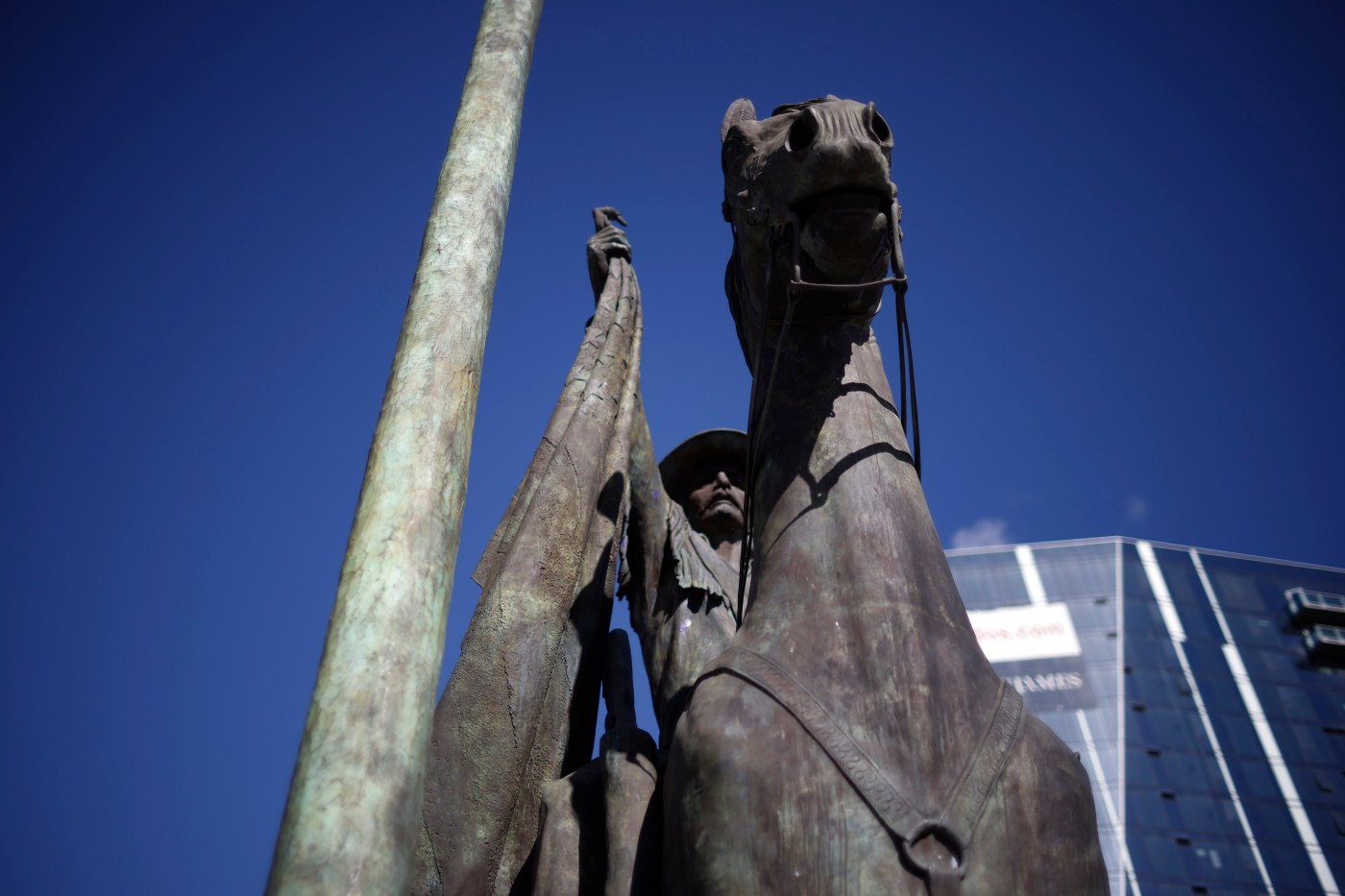 For nearly two decades, a 16-foot-tall bronze statue of a former San Jose mayor and captain in the Mexican-American War riding horseback while carrying the American flag has greeted residents and visitors as they entered downtown by way of St. James Street.

But by August 2022, the concrete slab that the 12,000-pound statue currently sits atop will be wiped clean, absent any remnants of the controversial memorial that once stood there.

The San Jose City Council on Tuesday night voted unanimously to formally begin the process of removing the Thomas Fallon statue and placing it in storage.

“This is the culmination of three decades of many members of our community, in particular our Latino and indigenous communities, voicing the pain that this statute has caused, and I’m glad that we’re finally at a point where we’re listening to those voices and taking a look at whose history we’re celebrating and how,” said councilwoman Maya Esparza, who called the statue an “example of what systematic racism is.”

Matt Cano, director of public works, said it could take up to 10 months to complete the removal, but he will be looking for ways to expedite that schedule. The city expects to spend up to $450,000 to remove it. That price tag includes barricading the road, shutting down a lane of traffic, jackhammering the concrete foundation, taking down the statue with a crane, transporting the pieces to storage and restoring the concrete.

The large piece of art, which is only valued at about $6,000, will permanently sit in storage unless a history museum or academic institution shows interest in displaying it exclusively for educational purposes, at which time the city would be required to go through another lengthy public process to approve the new use.

Since its inception, some Latino and indigenous residents of San Jose have denounced the statue as a symbol of racial subjugation and inequality and called for its banishment — a push that was renewed in the last year during a nationwide reckoning with systemic racism and a push to reexamine the legacy of racial injustice in the U.S.

The Thomas Fallon statue, which was commissioned in 1988 under then-Mayor Tom McEnery without any public input, displays Fallon and an unidentified companion riding on horseback into San Jose during the Mexican-American War in 1864 and hoisting the American flag as a symbol of the U.S. claiming California and much of the Southwest from Mexico.

For the first decade of the statue’s existence, it sat in storage in an Oakland warehouse as the city worked with community members to quell concerns that it celebrated imperialism and oppression. As part of a compromise later reached, the city agreed to put up four other pieces of art honoring different groups that served an integral role in the city’s history and then finally installed the Thomas Fallon statue — known by some as the ‘Raising of the Flag’ statue — in 2002.

Although Fallon did not participate in any genocide as some residents have accused him of, historians have agreed that he was an inconsequential figure in San Jose history.

In fact, Dr. Stephen Pitti, a professor at Yale University who wrote a book about Silicon Valley’s history with racism, said Fallon only garnered a reputation as a hero and key contributor to San Jose because of his own false self-promotion and later generations of civic leaders using those myths to “turn Fallon into a civic icon because his story contributed to their broader, ahistorical arguments and political agendas.”

Mayor Sam Liccardo said Tuesday that although some of the facts had been lost on both sides of the debate over the merits of the statue, he felt it was time for the community to move on.

“We critically need to focus our energies on what we build, not what we tear down,” he said. “I’m absolutely supportive of moving on and taking this statue down because we have many critical priorities that we need to focus on that are imperative and we need a community that is unified to address the great problem for our age.”

Some community members argued that the city should melt the statue down to create a piece of art that would honor the MuwekmaOhlone Tribe and ensure that the statue could not be put on display elsewhere.

“We need to be clear — it was an invasion of a sovereign nation,” Guillermo Tlacayaotzin Suarez, a member of the San Jose Chicano Moratorium Resistance Council, said in advocating for the melting down of the statue. “Thomas Fallon comes into San Jose de Guadalupe and raised a flag above the Republic of Mexico.”

McEnery, the former mayor who was leading the city when the statue was commissioned, vehemently disagreed.

“We reserve melting things down for swastikas and Confederate symbols — not for individuals who raise the flag, in this case, the American flag,” he said. “I think what’s most important is we that send a proper message to the future — future councils and our current citizens, as well as future citizens.”

Under California law, the city cannot authorize the melting or complete destruction of the statue unless the original artist gives their permission. In this case, the statue’s artist, Robert Glen of Tanzania, has declined to purchase it but requested that the city not melt it. Kerry Adams Hapner, San Jose cultural affairs director, informed the council that melting the statue would therefore be illegal.

Still, some council members pushed back and directed staff to reach back out to Glen and try to find a way in which the city did not have to pay to store the statue in San Jose.

“I’m not here to represent one artist that doesn’t even live in this country or on this continent,” said Councilwoman Sylvia Arenas. “I care about the people who are in the room with you now and the people who are listening and have been advocating for years against this statue.”

Poorest in UK have £40 a month less to spare than a year ago, study finds | Family finances