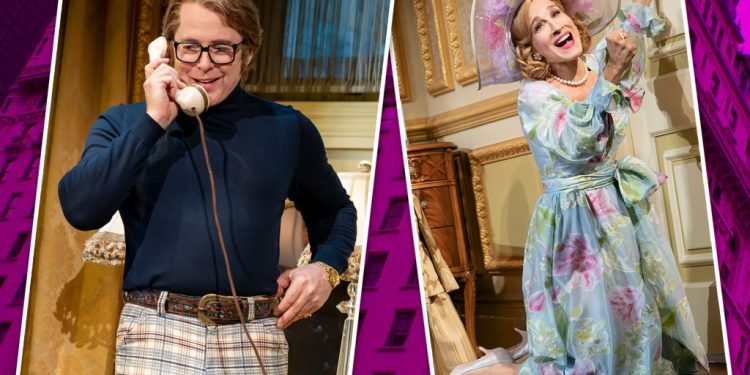 
You can’t get more Manhattan than Sarah Jessica Parker in the Plaza Hotel.

The two New York City icons are thrown together in the lighter-than-air revival of Neil Simon’s “Plaza Suite” that opened Monday night at the Hudson Theater on Broadway.

It’s a match made at Bergdorf’s.

Co-starring Parker’s husband Matthew Broderick, the 1960s-set comedy is an old-fashioned affair to be sure, but a sparkling one. “Sex and the City” fans will certainly enjoy it more than HBO’s weirdly woke and clunky “And Just Like That.” And, for everybody else, Simon’s middle-drawer play is a relaxing vacation from our overly serious theater season.

Running time: 2 and a half hours with one intermission. At the Hudson Theater, 141 West 44th Street.

Parker and Broderick play a trio of couples over three acts (the comedy is a long one for modern attention spans): A distant husband and wife celebrate their 23rd anniversary; a New Jersey housewife secretly reunites with her high school beau who’s become a big-time Hollywood producer; and a long-married pair spar while their daughter has locked herself in the bathroom, refusing to get married. The antics all go down in Suite 719 of the Plaza.

The deep first section fits most snugly on these two actors, who have been married for 25 years. While the wife, Karen, clamors to stage the perfect romantic anniversary at the fabulous hotel (John Lee Beatty’s set is richly detailed), Sam obsesses over his work and only half-listens to her. Between Broderick’s well-timed zingers, insecurities are revealed and humor conceals despair. This is the show’s high point, and lingers till the very end.

The next part has the least going for it, but serves as something of a halftime show. Broderick’s Jesse, dressed like Austin Powers, serves Muriel vodka stingers while they tiptoe around hooking up. He is enamored with her because she’s normal and wholesome, but she just wants to hobnob with his rich and famous friends.

Parker, perhaps from signing too many autographs in the West Village, has a strong grasp on Muriel’s bridge-and-tunnel perkiness. And Broderick, while not as skilled with transformation as his wife, channels a young Peter Bogdanovich (so, a bit creepy, but that’s partly the point).

The final act is the most broadly comic of the play. Roy and Norma angrily try to pry their daughter out of the bathroom on her wedding day. Nuptials at the Plaza ain’t cheap. Insults are slung, injuries are endured. Roy, who furiously counts every dollar being spent, is Broderick’s most appropriate pairing. The actor can be rather stiff — in recent years he’s pretty much turned into Leo Bloom from “The Producers” — and his staccato formality works well here. To Broderick’s credit, he also lets loose more than he has in ages.

On the whole, director John Benjamin Hickey’s production could be funnier in spots. The final act doesn’t go as madcap as it might. And while there was a feeling on Broadway that they were miscast — Maureen Stapleton and the more macho Walter Matthau were previous versions — there’s a tenderness to the married new stars that draws you in. And when Parker is let down by her husband in the first act, she brings us right back to Carrie Bradshaw being stood up by her friends at Il Cantinori on her 35th birthday. Your heart leaps out to her again and again.

The usual suspects will stick their noses up at “Plaza Suite” — it’s old, it has no relevance today, blah blah blah — but there is nothing wrong with some good ol’ opulence, one-liners and star power. Everything on Broadway need not be a brooding hipster musical with acoustic guitars and Edison bulbs.