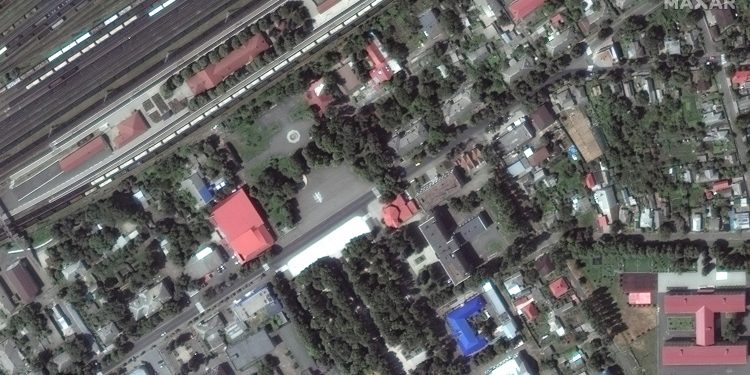 
Satellite images reveal the destruction of an eastern Ukraine city that has been attacked during Russia’s invasion.

Maxar Technologies have released before and after satellite images of the city of Sumy in Ukraine’s north-east, near the Russian border.

The US company has released satellite images of a train station and two residential areas, taken on July 18 last year, and March 14 this year.

Russia has said its strikes on Ukraine are not targeting civilians.

In their latest release, Maxar said the before and after comparison shots show a destroyed apartment building as well as homes that have been shelled.

The company also released images from the besieged eastern city of Kharkiv and the city of Chernihiv, which is roughly 150 kilometres from the centre of Kyiv.

In Kharkiv, Maxar said, fires and “artillery impact craters” can be seen in residential areas.

In Chernihiv, satellite shots show fires burning around homes and a local stadium that has been destroyed.

Meanwhile, large deployments of armour and military transport can be seen building up in southern Belarus.

Belarus President Alexander Lukashenko — an ally of Russian counterpart Vladimir Putin — has not officially said his country would participate in the war.

However, Maxar said, its images show a field hospital compound built in the Belarusian city of Naroulia.

Maxar also said an increased presence of Russian military in southern Belarus —  near the Ukraine border — was noticeable.

“Russian ground forces, engineering equipment and attack and troop transport helicopters deployments are noted in the region,” it said.