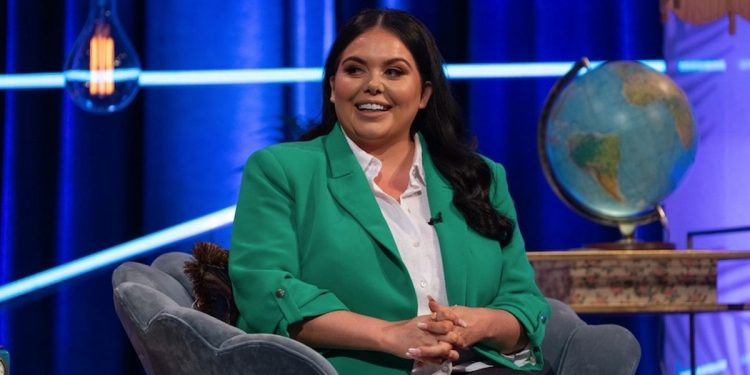 
Former Gogglebox star Scarlett Moffatt made an embarrassing blunder leaving a friend with a lewd tattoo that will be hard to live down, she revealed on Mel Giedroyc: Unforgivable

I’m A Celebrity winner Scarlett Moffatt has opened up about how her bad spelling led to a rather unfortunate tattoo for one of her friends while they were on holiday.

The ex-Gogglebox cast member, 31, had egged on mate Jenny Fleming to get ‘Don’t Stop Believin” tattooed on her back in tribute to Journey’s eighties hit that the pair fell in love with after it was covered on the hit US TV show, Glee.

Scarlett said: “We went on holiday to Turkey.

“We got pretty drunk and I was like, ‘Why don’t we all get tattoos?’

The star scrawled what she thought was the name of the song on a piece of paper, but admitted that spelling wasn’t her strong point at the best of times – let alone in the early hours.

Jenny says that Scarlett took her to a tattoo parlour
(

“It was about three o’clock in the morning. I think we could have possibly paid the tattoo man with a kebab, I can’t remember,” she said.

She explained that she realised her error when she went to put suncream on her friend the next morning and spotted the tattoo.

Her friend kept the tattoo, which is embellished with a star at either end of the misquoted song title, and is set to show it off on Mel Giedroyc: Unforgivable – a show where celebs confess their worst deeds.

Jenny recalled the wild incident: “We were supposed to go for a kebab and Scarlett took me to the tattoo shop with a drag queen.”

The story is a far cry from Scarlett’s other recent headlines, with the I’m A Celeb winner set to explore her Christian faith side on a BBC show.

The star will join seven other celebs, including Laurence Llewelyn-Bowen, in BBC Two’s The Pilgrimage: The Road to the Scottish Isles.

The show will see the stars travel through the Republic of Ireland and Scotland as they learn about the UK’s religious history.

Speaking about why she’s looking forward to the show, Scarlett said she wants to discover what her religion is, stating that she wants to be able to ‘answer that question with confidence’.

Mel Giedroyc: Unforgivable is back and airs on Tuesdays at 10pm on Dave. Catch up on missed episodes on UKTV play.

Who are new Gogglebox couple Roisin and Joe – and what are their real jobs?
Tags: embarrassingfriendleavesMoffattsrubbishScarlettspellingTattoo
Previous Post

Boris Johnson latest news: War could last years but may be beginning of end for Russian president, Liz truss says