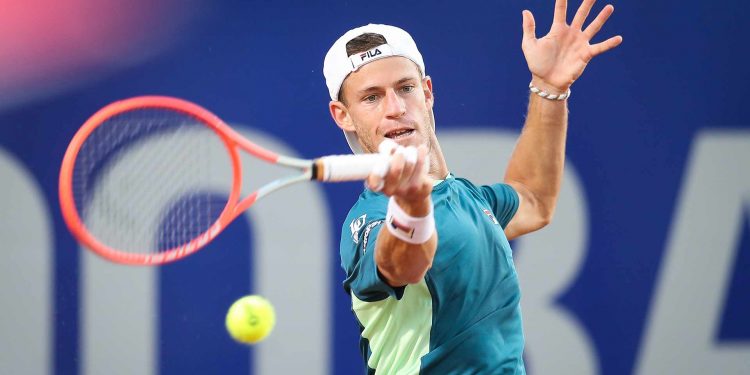 After dropping the first set and bagelling his Colombian opponent in the second, Schwartzman dropped serve in the opening game of the third and again when he served for the match at 5-3, but fought back to break in the final game of the match to secure a 3-6, 6-0, 7-5 win in two hours and 19 minutes.

Chasing his second title on home soil [Buenos Aires, 2021], the 5′ 7″ World No. 14 will next play Chilean qualifier Alejandro Tabilo, who claimed his third straight-sets win of the main draw against Argentine Sebastian Baez.

World No. 144 Tabilo is on the verge of reaching his first ATP Tour final after upsetting home favourite Sebastian Baez 6-1, 7-6(4), hitting 20 winners to just nine for the home favourite. Tabilo began the year at ATP Cup in Sydney, where he claimed a win over Norway’s Viktor Durasovic and was competitive against World No. 42 Filip Krajinovic, pushing the Serb to a third-set tie-break, and Spain’s Pablo Carreno Busta.

“You always dream [of a big result],” Tabilo said. “I’m playing a lot of Challengers so I don’t get many opportunities at the ATP level. I’ve been working on my forehand a lot, which hadn’t been a strength and I’m feeling confident with it. It feels nice to swing at it.”

Argentine wild card Juan Ignacio Londero, the 2019 Cordoba champion, improved his tournament record to 10-2 with a 6-4, 7-5 win over Serbian lucky loser Nikola Milojevic. The 28-year-old World No. 139 is making his first appearance of the 2022 season. Last year he went 0-11 at tour level and he had not won a match at that level since reaching the second round of Roland Garros in September 2020.

“This is a very important tournament for me, having won the title here in 2019,” Londero said. “It’s an amazing atmosphere and I like to be playing in front of my family and friends.”

Spanish sixth seed Albert Ramos-Vinolas set a semi-final showdown with Londero with a 7-6(5), 7-5 win over fourth-seeded Italian Lorenzo Sonego. The World No. 44 lefty is making his second appearance of the year, having fallen to Baez in five sets in the first round of the Australian Open. The 34-year-old has won three ATP Tour titles (all on clay).

Shropshire parishes and people back “Tree for the Jubilee” call