Scola moves into No. 2 spot on World Cup scoring list 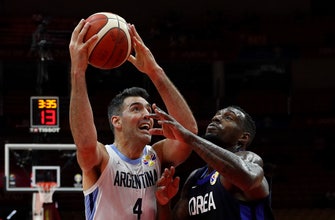 At 39, Luis Scola is not slowing down.

Scola climbed into the No. 2 spot on FIBA’s all-time World Cup scoring list on Monday, his 23 points and 10 rebounds helping Argentina hold off Nigeria 94-81 in a Group B game at Wuhan, China, to clinch a berth in the second round.

Scola — whose five World Cup appearances are tied for the most by any player — finished with 23 points and 10 rebounds for Argentina (2-0). He’s up to 611 points in his World Cup career, passing Australia’s Andrew Gaze’s total of 594, and is now second only to Brazilian scoring great Oscar Schmidt’s 906 points in the tournament.

“As I have said before, this is more than a game to me,” Scola said. “I love representing my country.”

Gaze, working in China as a broadcaster for this World Cup, offered a congratulatory message when Scola passed him on the scoring list.

“You’re a champion,” Gaze said. “You’ve dedicated yourself to the national team for many years and I can’t be more happy for you and your achievement.”

Scola was the youngest player on Argentina’s team that went to the 2002 world championships, the precursor to the World Cup.

Those days are long gone.

He’s now the oldest player on Argentina’s roster by more than 11 years, with the second-oldest being 28-year-old Facundo Campazzo. Of the 384 players in this World Cup, only 40-year-old Angola forward Eduardo Mingas and 39-year-old Brazil forward Alex Garcia are older than Scola. Garcia has him by just about two months.

At Foshan, Italy outscored Angola 36-6 from 3-point range and had little trouble improving to 2-0 in Group D.

At Beijing, Heissler Guillent scored 28 points as Venezuela (1-1) got a much-needed win to keep its hopes of advancing out of Group A alive.

At Guangzhou, Tunisia ran out to an early double-digit lead and bounced back from a blowout loss to Spain in its Group C opener.